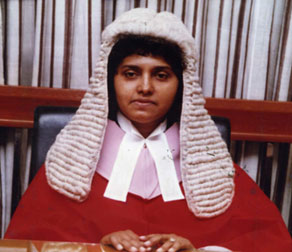 President of the Court of Appeal S. Sriskandarajah also seeking the determination of the Supreme Court whether a question determining the above fact will fall under Article 124 of the Constitution.

The Article 124 reads as “save as otherwise provided in Article 120, 121 and 122, no court or tribunal created and established for the administration of justice, or other institution, person or body of persons shall in relation to any Bill, have power or jurisdiction to inquire into or pronounce upon, the constitutionality of such Bill or its due compliance with the legislative process, on any ground whatsoever.”

They submitted the reference in respect of the Writ petition filed by Tamil National Alliance Jaffna District Parliamentarian Mavai Senathirajah seeing to prohibit the Northern Province Governor (retired Major General) G.A. Chandrasiri from expressing his views on the Bill titled “Divi Neguma” as on behalf of and/or in place of the Northern Provincial Council, and from expressing agreement or disagreement with the passing of the said Bill.

Both parties agreed that there is a constitutional interpretation involved in these proceedings and therefore under Article 125(1) of then Constitution, it should be referred to the Supreme Court for determination.

Deputy Solicitor submitted the following questions involve the interpretation of the Constitution:

1) Whether the Court of Appeal has power or jurisdiction to inquire into, or pronounce upon, the due compliance with the legislative process impugned in the application on any ground whatsoever in view of the Article 124 of the Constitution;

The Counsel for the Petitioner submitted to court the following questions that involve the interpretation of the Constitution:

2) Is the application before the Court of Appeal only a matter that challenges such a purported act ultra vires the powers granted to the Respondent (Governor) and not an inquiry into due compliance with the legislative process as stipulated in Article 124 of the Constitution?;

3) Can the Governor of a Province express views upon a reference of a Bill in terms of Article 154G(3) of the Constitution instead of the Provincial Council?;

4) Is the Governor of a Province entitled in law to perform the functions of a Provincial Council under Article 154G(3) of the Constitution?;

5) Can a Governor validly express views instead and/or in lieu and/or in place of the relevant Provincial Council when such Provincial Council is dissolved?
After having considered these questions submitted by both parties, President of the Court of Appeal submitted to the Supreme Court for its interpretation/determination.

Petitioner Senathirajah filed his application on his own behalf and also with a view to protecting and securing the rights guaranteed to the People of the Northern Province under the 13th Amendment and preventing its negation and denial. He cited the Governor as the Respondent.

He states the said Bill was published in the Gazette on August 10, 2012 and placed on the order paper of Parliament. In October 2012, pursuant to challenges to the Bill, the Supreme Court pronounced in SC Special Determination 1, 2 and 3 of 2012, that the Bill was in respect of matters set out in the Provincial Council list, and thus, since it had not been referred to the Provincial Councils by his Excellency the President as required by article 154 (G) (3) of the Constitution, it shall not become law.

Subsequent to the Determination of the Supreme Court being communicated to the Speaker, the Bill was withdrawn from the Order Paper of Parliament, he states, but it has now been referred to eight Provincial Councils for their views.

He states he is unaware of whether the reference by the President in respect of the Northern Province was to the dissolved Provincial Council or to the Governor of the Province.

He states that article 154 (G) (3) of the Constitution, requires reference to “every Provincial Council,” and that the Governor of the Province has no role to play in this evidently legislative process.

The Governor’s act of/imminent act of expressing his views on the Divi Neguma Bill is a naked usurpation by an executive actor of legislative power and a violation of the doctrine of separation of powers, which the Supreme Court have held to be protected by Article 4 of the Constitution, he alleges.

He contends that interpreting article 154 (G) (3) of the Constitution as permitting the Governor of a dissolved Provincial Council to express his views on a Bill, while a Provincial Council is dissolved, is absurd and dangerous, since the Governor in any event exercises his discretion, in terms of article 154 (F) (2), on the President’s directions.

He expressed consternation it would permit the President and/or Governor to bypass the constitutionally mandated scheme by consenting to Bills dealing with matters set out in the Provincial Council list when Provincial Councils are dissolved.

Such an interpretation, would, in short, permit the 13th Amendment to the Constitution to be used as a shield to justify executive meddling with purely legislative processes, he charges.

He states that since the Governor of a Province is an agent of the President in the Province, any interpretation permitting him to exercise powers explicitly reserved for a Provincial Council elected by the people of the given Province, would negate the purpose for which the Thirteenth Amendment was enacted, and must be rejected.

Therefore the Governor’s expression/imminent expression of views in respect of the Divi Neguma Bill is ultra vires his powers; amounts to an executive usurpation of legislative functions; violates the separation of powers guaranteed by article 4; violates the sovereignty of the People guaranteed by article 3; negates the purpose for which the Thirteenth Amendment to the Constitution was enacted; and is therefore, unconstitutional, illegal, void ab initio and of no force of effect in law, he emphasises.

He is seeking the Court to make an interim order suspending the operation of the expression of views of the Respondent in respect of the Bill as on behalf of and/or in place of the Northern Provincial Council, and his expression of agreement or disagreement with the passing of the Bill titled Divi Neguma, until the hearing and final determination of this application. courtesy: The Financial Times/DBS