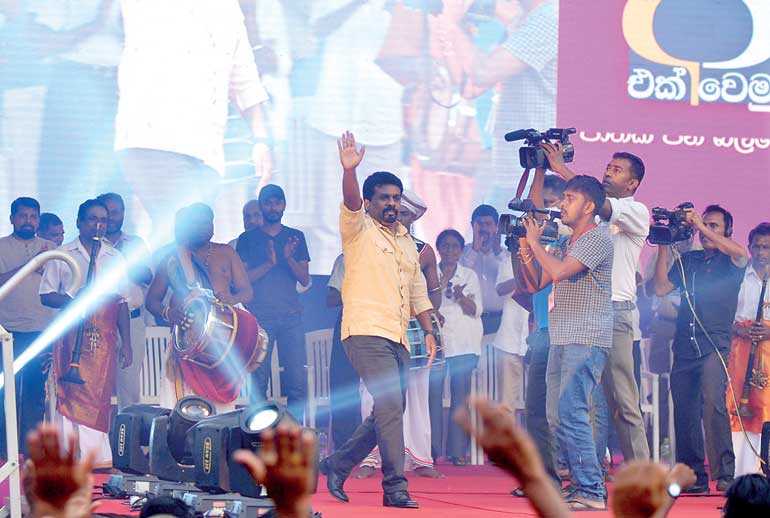 The JVP deserves a chance, because it promises a credible third alternative to the hackneyed ethno-nationalist and neoliberal paradigm of the UNP-SLFP-SLPP cohort – Pic by Lasantha Kumara.

The forthcoming Presidential Election is in many ways going to be an acid test for the two ethnic minorities, Tamils and Muslims, whose recent living experience had been nothing but traumatic.

Given the communal makeup of Sri Lanka’s majoritarian democracy, never will there be an opportunity in our lifetime for a Tamil or Muslim to become the president of Sri Lanka. Having placed Buddhism as State religion, it will be extremely difficult even for a Sinhalese Christian to compete for that position.

It was reported a few days ago that some Muslims in the Eastern Province are contemplating promoting a Muslim Parliamentarian to enter the race. It should be considered either as a joke or part of another but sinister hidden agenda. The country is not ready yet to accept a non-Buddhist to become its president. In all probability, the next contest is going to be among three Buddhists of whom the names of two are already known and the third is yet to be announced.

In any case, the contest is an unavoidable luxury that the nation can ill afford at a time when the country’s economy is burdened with escalating debt and falling revenue. Its economic growth is abysmal and the living standard of ordinary citizens is crumbling by the day with ever rising cost of living and scarcities.

After the Easter infamy, foreign investment has dwindled and so have tourist arrivals. With a looming global economic slowdown in wake of the ongoing Sino-American trade war and Brexit crisis, the prognosis for Sri Lanka’s economic revival does not look promising.

There are also other equally serious problems the country is confronting, such as an inefficient and corrupt public service, an outdated legal system, substandard educational and health deliveries, and a rapidly degrading environment.

On top of all this is pressure from regional and international super powers to compromise with the country’s sovereignty by allowing them to fight their strategic wars from inside the island’s maritime shores and territorial waters.

Tackling these issues is not easy and requires a comprehensive and even radical package of programs, which is sadly lacking in the manifestos of UNP, SLFP and SLPP that are in the race for presidency. Only the JVP candidate had at least referred to the need for a new economic direction in his inaugural address.

To restructure the economy, to transform the public service, judiciary, education and health, to stop environmental dereliction and above all, to allow peace and harmony prevail nationwide, the country needs a clear break from its recent past. Such a break cannot be without pain at the start but its long-term benefits will outweigh short-term difficulties. That break cannot come from the old guards who are policy bankrupt and schooled in ethno-nationalism and religious fundamentalism. It is a tough ask for the JVP. However, given the choice available that party deserves a chance. Is the country ready for a third alternative?

I have already argued that the JVP deserves a chance, because it promises a credible third alternative to the hackneyed ethno-nationalist and neoliberal paradigm of the UNP-SLFP-SLPP cohort. There is nothing original and different in their economic strategies, because they are bound by constraints imposed by the international managers of neo-liberal economies. Other ethnic parties like TNA, SLMC, ACMC and HU never had any economic policy and not even worth considering when it comes to tackling national issues.

To make things worse the only issue that is going to dominate the political campaign of the three contending parties, UNP, SLFP and SLPP, is Buddhism and its supremacy in this country. This populist agenda is aggressively pushed by a univocal coalition of Buddhist supremacists led by members of the Sangha, supported by sections of the media and vested interests from the petty bourgeoisie.

These supremacists are relatively a new element that came to the fore after 2009. There may be even foreign forces backing this group with their own separate agendas. It is sad that, with one or two exceptions, none of the political leaders, including the President, has so far come out openly to explain to the gullible masses the dangers inherent in the supremacist campaign.

The silence of these leaders is obviously political and opportunistic given their desire not to jeopardise the vote bank of supremacists. In the meantime, the aggressive and intolerant campaign of this malevolent desperados, is damaging not only peace and harmony but also the much needed economic recovery.

There is no running away from the fact that it was more than half a century of communal politics that brought this country to this perilous situation. It started with language and now shifting towards religion, and particularly towards Islam and Muslims. Buddhist zealots are all out to remove Islam and its followers from the cultural and economic landscape of this country.

In this sense, there is an ideological congruency between the demand for Buddhist supremacy in Sri Lanka and that for Islamic supremacy as being advocated by Islamists such as the ISIS. Both are intolerant and violent in nature and both are misfits for plural societies. They pour the same wine from different bottles. In this sense, even the Easter carnage should be seen as the violent response by local Islamists to counter the zealotry of Buddhist supremacists.

True, Muslims have to reform themselves, as I have repeatedly argued, to recover their lost heritage of the age old harmony between Buddhism and Islam in this country. But, this reformation is an internal matter and should be left to the community and its leaders. Instead, what is happening now is that an existential threat posed by the supremacists is making internal reforms impossible.

Because of this it has forced the Government to push through some band aid solutions to issues like gender balancing in the operation of the MMDA, changing Muslim attire and controlling madrasas. This hasty interference just before going to the polls is a politically-motivated exercise, and more to appease the demands of supremacists than to demonstrate genuine concern in resolving the irksome issues that are destabilising the Muslim community.

The supremacists also realise the decisive role played by minority votes in previous elections. It was minority votes that defeated the pro-supremacist Rajapaksa regime in 2015. To prevent this from happening again there is a long term plan to repopulate traditional Tamil majority electorates in the north and east with Sinhalese Buddhists.

Mushrooming Buddha statues in Tamil areas and converting Hindu temples into Buddhist temples, based on dubious archaeological evidence, is also part of this sinister program. In the short term however, they are bent in creating a rift between Tamils and Muslims in the east so that minority votes in the forthcoming election could split and enable a pro-supremacist candidate to win.

Apart from these campaign tactics, populist Buddhism in the hands of supremacists is creating another and far more serious danger to the security of this country. By claiming that Sri Lanka is a home that belongs solely to Sinhalese Buddhists and that the minorities are only the tenants, as proclaimed by Ven. Gnanasara in Kandy in June, the supremacists have made those minorities virtually stateless.

In that case why should the minorities remain patriotic? Why should a tenant worry about protecting the house which he or she does not own? The supremacists are deliberately encouraging the minorities to act as fifth column at a time when foreign powers are vying for permanent foothold in this country. No wonder security has become another issue in the Presidential Election.

It is in this politically volatile atmosphere that the entry of the JVP receives extra significance, particularly from the point of view of minorities.

To reminisce a little, I was a young man in my early twenties when I marched with hundreds of thousands of others in 1963, along Maradana road towards the Galle Face Green, to listen to the May Day messages from leaders like NM, Peter, Philip, Colvin, Bala and others of an earlier generation of progressives. They were the only group at that time who promised equality of status too all Sri Lankans irrespective of their cast or creed. Unfortunately, with their brilliant minds, committed patriotism and principled policies they could not capture government on their own because their strength was disproportionately fixed in the urban areas with little weightage amongst the rural peasantry.

A few of those leaders later joined the SLFP and tried to change the economic direction of the country. But reactionary elements within the SLFP proved a stumbling block to the socialists and the coalition was defeated at the elections in 1977. However, it is a strange irony in Sri Lanka’s history that it was that coalition’s socialist minister, historian, rationalist and lawyer, Dr. Colvin R. De Silva who ennobled Buddhism as the State religion in the constitution he authored.

Today, the JVP is the only political party in the country that has a socialist leaning and is non-communal. Unlike the previous leftists the JVP started its movement from the rural base. Although it has built up a respectable urban constituency it should go back to its rural roots to give itself a reasonable chance to make an impact in the current race.

It is true that the JVP has blood on its hands. But, which of the other parties doesn’t? The present generation of JVP leadership should not be held responsible for mistakes committed by their predecessors. Almost half a century has elapsed since the initial JVP insurrection occurred in 1971. Many of its present leaders were not even born at that time, and when the second insurrection was staged in 1987 they were in their teens, more romantic and immature. How can one reasonably hold these men and women responsible for their predecessors’ crimes?

The present context is different and the JVP’s ideology is also mellowed to accommodate changed circumstances. Most importantly, they are thinking in terms of the nation and its people as a whole rather than in terms of sections or communities. Their candidacy for presidency therefore deserves serious consideration.

The two minorities, Tamils and Muslims, who let down the progressive forces in the past must now realise that their communities have no future under regimes that are impregnated with religious populism and ethnic chauvinism. The JVP should take its message to the Tamil and Muslim electorates and convince the new generation of voters of the futility in following their reactionary leaders. Of the two communities Muslims have the worse leadership. These leaders have unashamedly sacrificed the collective interest of the community to enhance their own individual interests.

To restructure the economy, to transform the public service, judiciary, education and health, to stop environmental dereliction and above all, to allow peace and harmony prevail nationwide, the country needs a clear break from its recent past. Such a break cannot be without pain at the start but its long-term benefits will outweigh short-term difficulties.

That break cannot come from the old guards who are policy bankrupt and schooled in ethno-nationalism and religious fundamentalism. It is a tough ask for the JVP. However, given the choice available that party deserves a chance. Is the country ready for a third alternative?