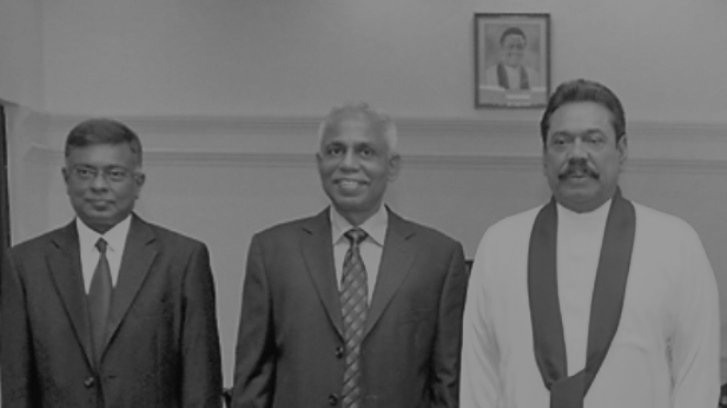 [Judge Priyantha Jayawardena on the left; A clear case of conflict of interest]
The Supreme Court Sri Lanka, in an unprecedented manner taken up a FR case filed by teo citizens, and gave its decision within a day even listening to the other side. The petition was filed on 11th Thursday September and decision was given on 12th Friday.

The Ministry of Economic Development had planned to distribute Rs.2500 among families living in Monaragala District during the election campaign on the pretext of drought aid, but was stopped by the Commissioner of Elections. The Elections Commissioner made an order on 09th to put the payment scheme in hold until after the elections after his touring of the province as a response to the complaint made by opposition political parties and election monitoring organizations saying that this payment constitutes an illegal bribe.

Later, a group supporting the government from Monaragala filed a fundamental petition in Supreme Court stating their fundamental rights were violated due to the decision by the Commissioner of Elections. The petition was heard by a bench of judges that included Chief Justice Mohan Peiris.

The Supreme Court gave permission to carry out the project advising the District Secretary Monaragala not to get candidates for the election or political parties involved in the project.

Minister in charge of the Ministry involved is Basil Rajapaksa. o

Elections Commissioner, Mahinda Deshapriya, said he would seek a clarification from the Attorney General, on Friday’s Supreme Court ruling that allowed aid relief in Moneragala, despite the Polls Chief requesting such be stopped, noting it was election propaganda in the guise of a relief programme.
Deshapriya had ordered the distribution of Rs 2,500 as drought relief money to the people of Moneragala by the Economic Development Ministry, be stopped, as he alleged it was done in the guise of drought relief during election time. However, on Friday, Chief Justice Mohan Peiris, ordered the Economic Development Ministry to continue the distribution of Rs 2,500 as drought relief.

He said he had ordered the Moneragala District Secretary to stop the distribution of drought relief if they are unable to cover at least five districts that are affected by the drought. There are 10 districts that are severely hit by drought.
Nevertheless, he said if only Moneragala and no other district received drought relief as a result of the Court order, he would abide by it.

“There are only two institutions in the country that are above me; Parliament and the Judiciary. Therefore, whatever ruling they make I must accept it. However, I hope God is on the correct sie,” he said.

Several dresidents of Moneragala filed a petition in the Supreme Court to overturn the Election Commissioner’s request to halt the distribution of Rs 2,500, which the latter alleged was used to bribe voters, citing that their fundamental rights were violated.

The verdict given by the panel of judges presided over by CJ Mohan Peiris stated that stopping the distribution of Rs 2,500 was a violation of the Fundamental rights of the petitioners.
However, the order of the Supreme Court stated that drought relief money must distributed without the participation of politicians.