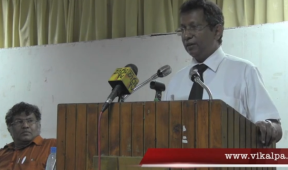 Minutes after the press conference held by five leading civil society organisation to oppose the arrest and restriction imposed after the release on  Ruki Fernando and Fr. Praveen Mahesan, , a military contingent of 15 soldiers has entered the office of one of those civil society organisation, looking for a vehicle, used by Ruki Fernando to travel within Colombo last two days.
The press conference was addressed by Dr. P. Saravanamuthu of Center for Policy Alternatives (CPA), Attorney at law J.C. Weliamuna and Attorney at law Chandrapala Kumarage of Lawyers for Democracy,
Sunil Jayasekara of Free Media Movement, Udaya Kalupathirana of INFORM and Attorney at Law Sudarshana Gunawardana of Rights Now and Chandraguptha Tenuwara of FUTA. The press conference was held at Library Services Board, Colombo 7 at 2.pm local time.
Three officers of Terrorist Investigation Division (TID) of Sri Lanka police has came to the Rights Now office as the press conference was in progress elsewhere and following them the military contingent has arrived. They have shown a photo of a car and individual and asked the Rights Now staff whether they seen the vehicle or the individual. Unconfirmed reports say that the individual in the photo could be one of the Tamil suspects of shooting took place in Dramapuram few days ago.
In fact the vehicle they have shown was the car Ruki Fernando used to travel after his release, informed sources told LankaeNews. Military has set up temporary check points to find the ‘LTTE suspect’s car’ close to the Rights Now office in Nawala, Colombo.
Considering a person, who has been released without any charges as a terrorist suspect is clear signal of intimidation to other Human Rights Defenders (HRDs) as well, a human rights lawyer told LankaeNews.
Speaking at the press conference this afternoon in Colombo, senior human rights lawyer J.C. Weliamuna emphasised that HRDs has right to collect data on human rights violation any where in the country and there is no law to prohibit such work in the North of Sri Lanka. He added that they have right to speak about those rights violation any where in the country or the world.
The magistrate order issued to Riki Fernando and Fr. Praveen read as follows: ”Sharing information regarding the investigation being conducted by the TID (related to you) with whatever persons either national or international may harm the ongoing investigation; herewith you are ordered not to engage in such activities.” (Not a direct translation)
Mr. Weliamuna further said that in a situation where thee is no Emergency Regulations enforced, there is not legal basis for such an order.
Speaking at the press conference Sunil Jayasekara, convenor of the FMM posed a question: When former Army Commander Sarath Fonseka was allowed to speak to press criticising the judgement, even after he was convicted, every time he was produced at the courts on what basis this restriction has been imposed on Ruki Fernando and Fr. Praveen after they were released. He told that the FMM oppose this court order and stand by the two HRDs.
In the meanwhile reports reaching LankaeNews say that after the provincial council elections to be held on 29th this month, the Rajapaksha regime has planning to arrest number of human rights activist in the on false charges. A media campaign naming and blaming selected HR activist is also being planned. There is possibility of few bombs being exploded in the name of LTTE, our sources say. LankaeNews will publish details of this sinister plan also.