Supporting unpopular Wickremasinghe Govt in Sri Lanka will result in unrecoverable IMF phobia in the society, damaging the reputation of the IMF – Freedom Defenders 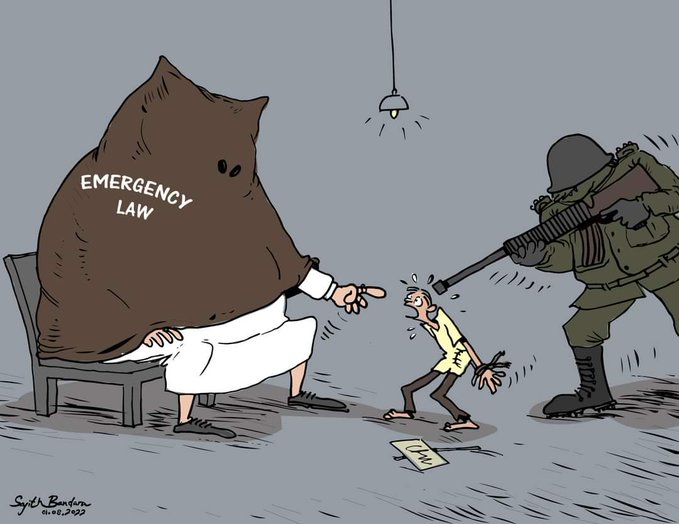 Writing a letter calling for more transparency and clarifications from IMP, Chirantha Amerasinghe, President of “Freedom Defenders” , requests the IMF to be more transparent in its communications with the GoSL and urge the organization to request the GoSL to address the concerns raised in this letter without delay. It is a known fact that good things done even with the correct intentions at the wrong time could end badly for both parties and prove counterproductive.

Request for a clarification on conditions to Sri Lanka

We would like to bring to your attention that the Government of Sri Lanka under the guidance of the incumbent President HE Hon. Ranil Wickramasinghe is on a rampage of human rights violations, suppressing protests, persecuting activists and the Rising people of Sri Lanka (protestors), who were part of the historical struggle, which led to the resignation and ousting of the former President Nandasena Gotabaya Rajapaksa.

It is to be further noted that, Mr. Wickramasinghe who has no significant mandate of the people, is considered to be an “utterly failed politician” now backed and supported by the Sri Lanka Podujana Peramuna (part of the Rajapaksa dynasty) at the current moment in time. A party which clearly does not seem to have a valid people’s mandate as well.

Actions of Mr. Wickramsinghe seem to reflect that the protests are an obstacle to obtain the International Monetary Fund (IMF) bailout by the Government of Sri Lanka (GoSL), which in turn raises concerns as to if your organization is pressuring the GoSL to persecute, suppress the protests and the Rising people of Sri Lanka or as to whether the Government is under the impression that a mirage of political stability created by such actions will be gullible to the IMF. Therefore, we request for a clear clarification in this regard.

We also point to the fact that such persecutions, suppression, arbitrary use of the emergency law and Human Rights violations will be detrimental to the countries qualification to maintain the GSP+ concessions, if lost, risks sending the country’s economy to spiral out of control into a bottomless abyss.

The Government of Mr. Wickramasinghe, just as the former Government of Gotabaya is clearly aware of the repercussions of such Human Rights violations and yet seems to love shooting itself on the foot and continues down the wrong path undeterred, possibly with a motive to destroy the economy and stability of Sri Lanka to an unrecoverable position thereby letting geopolitical agenda’s of superpowers like India and China take advantage of the helpless island nation and its people, thus possibly further allowing our sovereignty and territorial integrity to be compromised to the same.

The states seeming persecution of the Rising People of Sri Lanka at a priority basis while giving less priority to the prosecution and investigations into the attacks on the Rising People and protests sites on 9th of May, 22nd of July 2022, and not limited to the criminal investigations into the seemingly deliberate crash of the economy and other such incidents only continues to contribute to undermining of the rule of law in the country in the public eye.

We remind the IMF of the events which led to the halting of the IMF program offered to Sri Lanka during the Yahapalana government which came to power in 2015 and point to the fact that some politicians and people in society still believe that the IMF programs are pure evil and full of geopolitical agendas.

Adding insult to injury, in the backdrop of the horrible economic situation, implementing economic policy decisions required by the IMF with political bodies such as the unpopular Wickramasinghe government (one lacking popularity and a valid mandate of the people), risks causing an unrecoverable IMF phobia in the society, damaging the reputation of the IMF as well as putting the whole bailout program in jeopardy, also possibly resulting in hate and anger at the IMF and its officers.

As an organization that comprises of activists that has been with the Rising People of Sri Lanka from way before the struggle, let us be very clear that the struggle did not call on the resignation of the former President so that a Parliament which does not reflect the true peoples mandate could continue to appoint a President and go forward expecting to stabilize the country, but rather required an immediate dissolution of Parliament for elections, where the true support and mandate of the people can be reflected to the Executive (until abolished) and Legislature, thereby empowering the constitutional bodies to restore rule of law, anti-corruption mechanisms, human rights, political stability, proper economic/monetary policy and fiscal discipline which are basics required in any country to gain economic recovery and to maintain economic growth and stability, even allowing for a proper utilization of the IMF bailout package moving forward.

Wherefore, we kindly request the IMF to be more transparent in its communications with the GoSL and urge the organization to request the GoSL to address the concerns raised in this letter without delay. It is a known fact that good things done even with the correct intentions at the wrong time could end badly for both parties and prove counterproductive.

Power to the Rising People of Sri Lanka!