Struggling To Survive: Families Hit By Floods In Kilinochchi 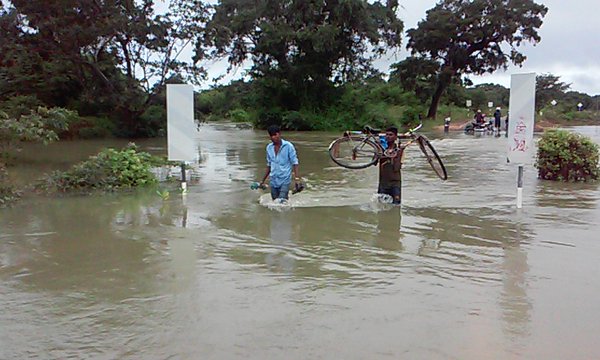 Several families affected by the recent floods in Kilinochchi are looking at ways to survive after losing their crops. Jaffna based civil society said that most families in Kilinochchi depend on their paddy to earn a living.

However the heavy rain flooded the paddy fields in the area damaging over 3000 acres of paddy in the Kilinochchi district.

He said the people displaced by the floods were housed in 12 centres but have now returned home since the water has receded. There was a concern that a lot of focus on sending relief to families in Colombo and Aranayake and very little to Kilinochchi.

“It is not true to say the people here have been ignored,” the spokesperson added.

The army said that on the direction of Major General K.A.D.A Karunasekera, the Commander of the Security Forces in Kilinochchi, troops assisted the local flood victims following the heavy rains in the Kilinochchi area.

The heavy rain resulted in the Mandagalaru bridge, which is located between the Jaffna and Mannar road (A-32), being affected disrupting transport activates. Troops from Army, Navy and Police were liaised with the fishers’ society in Pallikudha to help civilians to cross the bridge using boats.

The Nethilaru bridge which is located between Dharmapuram and Visuamadu on the A-35 road was also flooded and troops belonging to the 14 Sri Lanka National Guard (SLNG) Battalion placed sand bags to prevent the bridge from being damaged.

The Chief Coordinating Civil Affairs officer of the Security Forces Headquarters in Kilinochchi distributed lunch packs among the flood affected families in Ambalnagar while troops from the 16 (v) Sri Lanka Light Infantry (SLLI) also distributed meals for flood affected families at Marathanaga. In addition assistance was also given to the displaced people at Paranthankudiiruppu, Nadankudiiruppu and Umayalapuram.

Meanwhile, the army media unit said that on the directions of Brigadier Deepthi Jayatilaka, the General Officer Commanding of the 66 Division, troops of the 663 Brigade distributed relief parcels containing clothes, water bottles, dry ration, sanitary items and other essentials to the flood victims in Poonaryn with the support of the Unity Mission Trust Institute in Colombo.

The relief items were distributed to 74 families including 400 children at the Hindu Maha Vidyalaya, Paranthan and Mahadeva Child Home in Kilinochchi.