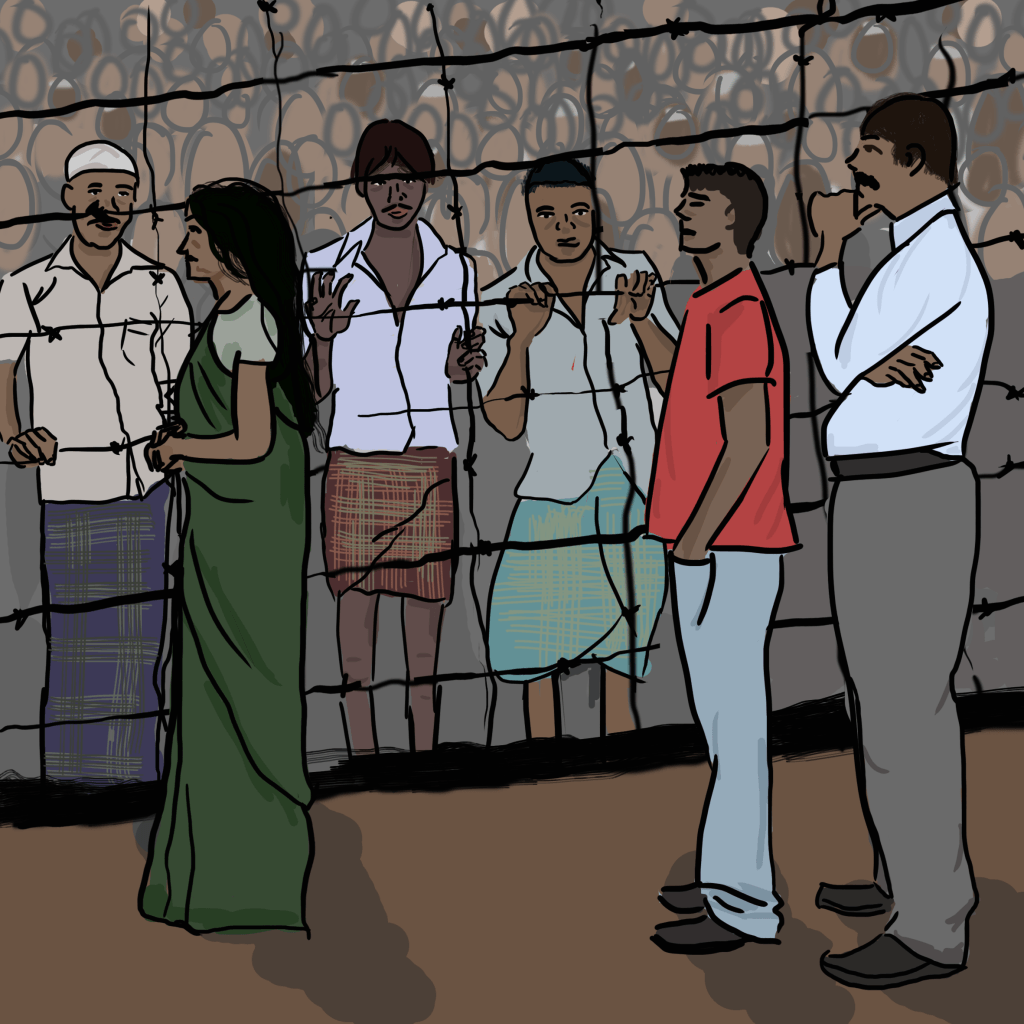 “My father was passionate about Tamil,” he recalls. “Even today people tell me that he went to Mannar for a hunger strike and people welcomed him with garlands and great respect,” Sivanathan says about his father. “Since he was very interested in Tamil-related issues, he listened to BBC radio every day before he went to sleep. I used to listen to the radio with him,” he says. Like his father Sivanathan developed an interest towards the Tamil traditions, culture and arts.

Sivanathan also heard about the conflict from other family members including an uncle who lived in Colombo through the riots of the 1950s. “As I was growing up, he told me stories about Sinhala extremism and its brutalities such as how Tamils were dumped into hot tar and how the word ‘Sri’ was carved into their skin,” he says.

In the late 80s, Sivanathan’s parents married him off in a rush in the hopes that if he was married, he wouldn’t be arrested and tortured by the Indian Peacekeeping Force (IPKF). At the time, Sivanathan says, the IPKF was picking up many young Tamil men on the assumption that they were affiliated to the LTTE, but since LTTE personnel did not marry at the time, marriage was considered a form of security.

“There were many Tamil militant groups and they were all divided,” Sivananthan says, piecing together a picture of the state of militancy in the late 80s.

[alert type=”success or warning or info or danger”]“People joined these groups according to their likes and dislikes. I know that sometimes individuals from the same family were members of different militant groups. But whenever there was a problem, the LTTE had the upper hand. There was a shooting incident in a hospital. I think it was in Jaffna. I heard that there was a mother whose two sons were in two different militant groups. One shot the other. Imagine how the mother must have felt. I heard such stories. We could have gotten somewhere, if everybody fought together.”[/alert]

In the early 90s, Sivanathan fled with his wife to India as the army began closing in on the North. “We arrived in India with just a plastic bag, leaving all our wealth behind,” Sivanathan says. “We had a very hard time for the first four years we were there.” Things only started looking better when Sivanathan joined a religious charitable group operating in the camps. “I served with them for a decade,” he says. “I worked for the head office. I served our people. It was my greatest happiness. I was a refugee and then I worked for refugees. It was a gift from God. Not everyone gets that kind of opportunity. I do not know how other people saw it, but I am so proud of it. I visited the camps.”

“But we had issues there as well,” Sivananthan notes. “We had to stay inside the camps. We could not go out. We had to stay with our families. Just like the CID here, there was Q branch there.”

In 2004 during the ceasefire Sivanathan, his wife and now his two children moved back to Sri Lanka. “It was my love for my motherland that made me come back,” he says.

Just months after returning, Sivanathan lost his only daughter to the December 26, 2004 tsunami. “We had lost our house in the war so when we came back we constructed a new house,” he says, recounting the tragedy. “On December 25th for Christmas we decided to celebrate by moving into the new house. The next morning we went for mass and left our daughter at home because she was too young. We heard the news of the tsunami while we were at church. I left my wife and ran back looking for my daughter but the water kept coming. By noon they started bringing bodies on tractors to a nearby college and when I went there I found my daughter’s body among them.”

Sivanathan, his wife and their son lived in a transition camp for a year before returning home to Mullaitivu. But by that point the war was resuming and they struggled to receive essential items which the government had banned.

Sivanathan remembers the army’s attacks using kfir fighter jets in vivid detail. “If these kfir jets strike,” he says, “the whole neighbourhood will be destroyed.”

“People kept dying – there were incidents where some who tried to hide under a bridge upon seeing a fighter jet were killed when the next plane struck the bridge,” he adds.

“Women were like a shield to us,” Sivanathan says about the role of women during the last phase of the war. “For example, the armed forces and the LTTE would mostly capture men as opposed to women, so the women were the ones who would go out instead of us if needed.”

Sivanathan’s son was forcibly recruited by the LTTE during the last phase of the war. “Near the end of the war, the LTTE did some bad things like forcefully recruiting one person per family,” Sivananthan says. His son later escaped and the LTTE imprisoned Sivanathan in a bunker for three weeks saying they would release him if he gave his son back. He managed to get out when that area was bombed. But his son was taken back.

“Yes we supported them but not because we wanted to be ruled by them,” Sivananthan says beginning to explain his complicated feelings about the LTTE.

[alert type=”success or warning or info or danger”]“It was mostly because we wanted our language, our culture and our assets to be protected. More than our assets, our ancestral land should be protected. Look how we are struggling after losing everything now. We do not have our lands back. See now people of Pilakuddiyiruppu, Keppapilavu and Vadduvakal are fighting to get their lands back. [The Sri Lankan state’s] goal is to destroy our ethnicity.”[/alert]

Sivanathan and his family still chose to remain in Mullivaikkaal instead of leaving for army-controlled areas even after his ordeal with the LTTE. “We were afraid of the army,” he explains. “They would have seen us as LTTE only. They were in such a state. If they were only killing the LTTE, why did they kill all these civilians? Why did they bomb the schools? We did not want to go there even if staying in Mullivaikkaal would prove to be fatal.”

But when his son escaped from the LTTE again in early 2009, this time Sivanathan and his family decided to leave to avoid his son being taken back. Other families supported them to make their journey out of Mullaitivu in the end.

“God helped us and we are somehow alive today,” Sivananthan says. “But there were others who could not escape like us. You must have heard of families who died inside the bunkers. One of my uncles went to sell some food and got killed in an attack. Another lady who went to the Maathalan hospital to see her dead son’s body got killed there in an artillery attack. There are many horrible stories like these. You would only understand if you have experienced them. There are people who got harmed by the government. There are people who got harmed by the LTTE. Some would not accept that the LTTE harmed people. But I will never forgive certain things they did during the last months of war.”

Sivanathan and his family lived in an IDP camp in Vavuniya for one year and once again Sivanathan joined a religious charitable group to help people inside of the camp. Within a month though, Sivanathan’s son had to surrender to the army as they came around saying that everyone affiliated to the LTTE, even those who had been forcibly recruited in the end, needed to surrender.

For five months, Sivanathan’s family did not even know where his son was being held. When the military finally told them where he was being held, only one family member was able to go and see them. Then his son was transferred to Boosa prison. After contacting a lot of people inside the religious charitable group he worked in, Sivanathan was able to go and see his son in Boosa prison.

“You needed at least two days to go there and return,” Sivananthan says. “They would treat us like dogs there. It was a very small area where they would bring the prisoners. They would bring in 15 prisoners at a time. There was metal mesh barrier between us and the prisoners. My son and I did not talk much. We were just crying.”

After that first visit, Sivananthan made the difficult trip to visit his son once a month for a year, until finally he got a human rights organization to intervene in his case. Following that, Sivanathan was interrogated by the Terrorism Investigation Department on the notorious fourth floor in Colombo. Only after this interrogation did the military send Sivanathan’s son for rehabilitation, where he was kept for a year.

Sivananthan thought it would be the end of the struggles when his son was finally released home, but then CID started coming to his house asking about his son on a monthly basis. In the end Sivanathan managed to send his son out of the country. “They still come,” he says, “but now they come once in every four-five months.”

Now Sivanathan continues to work for the same religious charitable organization in the Vanni. He says he is losing hope about the current political situation and the fate of the Tamil people but adds that if there is to be hope, “first there should be unity among our people and then our past should be made known.”