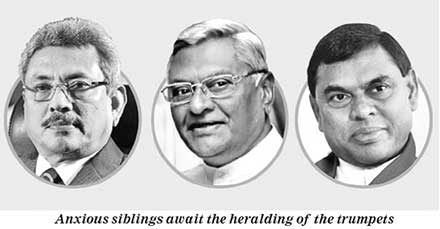 (June 9, 2018) Gotabaya’s candidature for the presidency has been announced with much fanfare. All the backward forces of Sri Lankan society gathered at a great event organised by an elitist-chauvinist outfit called Viyathmaga in a resplendent hall to greet their new champion. Narrow nationalists and Sinhala chauvinists were there; leaders of the Joint Opposition attended; a sprinkling of the Dead Left deserted geriatric beds to put in a showing. Vasudeva did not attend but tied himself in knots saying one thing and then another according to the Daily Financial Times; goodly numbers of businessmen salivating for spoils were there. Understandably some fed up with Ranil’s pluperfect incompetence, stunned by Sirisena’s treachery and mystified by the venality of presidential skunks in car parks also drifted into the meeting.

Neo-populism has made sweeping gains in Europe and America. In Italy the equivalent of the Bernie Sanders base and the Trump base have allied and formed a government. It is possible that Lanka’s chauvinist alt-right, petty-bourgeois populists, business clusters and retired military-fascists thought it not too early to show their hand. Or maybe the knives are out in Rajapaksa-Joint Opposition circles (the Dead Left wants Chamal, crooks want Basil, chauvinist want Gotha), so it was necessary to stake an early claim. The meeting was billed as the launch of Gota’s economic programme; though GL Peries denied it, it was in fact the launch of a presidential bid pending Mahinda’s endorsement. Why on earth would one launch an economic programme except as the first step in a presidential bid?

What did the sayings of this monetary, fiscal, financial and economic genius add up to; prosaic platitudes, plain prose and banalities. Here’s a sampling.

*The foremost priority is economic growth, the foundation and the cure for all ills.

*Growth will ensure the sustained prosperity and well-being of the people.

*We will be driven by humans with power and many sided abilities.

*We will open up to foreign investors and international partners.

*We will safeguard sovereignty and cultural values.

So there is not much to it as an economic programme; no fiscal policy, no debt reduction targets, no export strategy, no specific relationship between state and capital, and no planning perspective; it was all piss and wind. More interesting was what was missing from the speech of this high member of the last government. Basil’s pilfering from every project and contract; can the same people be restrained? Mahinda’s megalomaniac outlays and how the same regime can avoid it again.

Gotabaya-Rex (GR), a label suggested by a smartarse friend, can be stopped, must be stopped, and not difficult to stop unless yahapalana makes a fool of itself, again. Aye there’s the rub, folly has become a habit. Not just Ranil and the damn fool UNP but even my comrades in the January 8 Movement, as we call ourselves, had no clue what was coming on February 10. I can say, not proudly but sadly, that I was the only one in my circle (left, radicals and liberals) who saw impending defeat.

The JVP was in cloud cuckoo land; the economic genius of Ranil-Charitha-Malik-Eran-Harsha delivered a stillborn old-style-liberal programme which it is now busy cremating; the TNA, “brilliant” Sumanthiran included, could not see the flop of the new constitutional project staring it in the face (how can we get a constitution when the president undermines it at every turn?); and our wacky president lives in never-never land. Lal Wijenayake has exposed in polite but no uncertain terms that His Excellency is not excellent at telling the truth. The aforementioned economic quintet, deep in slumber, couldn’t see Modi’s state driven strategy delivering 7.7% growth, two years in a row, just across the Palk Strait. The 100-day Programme was only a transitional stabiliser before getting to serious business which never came.

Yet GR can be stopped despite crummy yahapalana. Gota can be defeated because voting is driven by ethnic prejudices. I have done this arithmetic before but it bears repetition. (Those weak in arithmetic can give algebra or calculus a try but they can’t subvert logic and number). Unless Muslims and Tamils (Ceylon and Upcountry) catch suicidal abstention-influenza they will vote 100% against Gota. That’s a good 20% of the population. Not all the Cardinal’s Hail Mary’s and novenas will swing much of the Catholic vote. Counting down to fractions is absurd but the broad picture is immutable; 23+% of the population, the minorities, constitute an anti-Gota rock. Hence I contend that unless Gota polls over two-thirds of the Sinhala-Buddhist (SB) vote (70% of the population) his prospects are dim. (The UNP has never polled less than 25% of the SB vote; add the JVP and civil society). Ethnic account keeping may make you sick, as it does me, but get real; this is Mother Lanka in modern times, not Plato’s Republic.

Yet our yahapalana chaps are expert at snatching defeat from the jaws of victory! There are two threats; mass abstentions as on February 10 when one in four or one in five UNPers gave Ranil a kick in the butt and abstained, second the tricky question of identifying the anti-Gota candidate who can draw the largest support. At this point in time my mind is a bit blank; I can conjure up only two names, Ranil and the JVP’s Anura Kumara Dissanayake (AKD). I don’t think the Field Marshal is a persuasive suitor though he has offered himself; better he goes head to head with Mahinda in Kurunegala at a general election. I rule out a surprise dark horse as in 2015 a second time; that cock won’t fight again. This time the Rajapaksa slayer must come from active political ranks and the SLFP’s offer, now howling like a cornered hyena in a car park, is already kaput.

Both have weaknesses. Ranil has soiled his linen and muddied populist waters, but to my mind this is less serious than yahapalana’s calamitous inability to put a single Rajapaksa-era mega crook (Lalith W is small change) behind bars. Mariano Rajoy was evicted as Spain’s PM because 29 of his party members were proved to be crooks; the new Malaysian government will fix million-dollar mega-crook Najib Razak; last week I gave examples where mega-crooks including Presidents have been nabbed and convicted. Lanka’s at-cross-purposes yahapalana, its bovine prosecutors and a soporific judiciary add up to a worse-than-useless decoction. For better or for worse Ranil will bear the brunt of this at the next election.

On the plus side, the UNP base and Muslims, Tamils and Catholics is a sure-bet block vote against Gota (observe I prefer not to say for-Ranil for reasons of accuracy). The minorities and a minority-of-the-majority will defeat the majority-of-the-majority at the next presidential election; that’s how it will be. That’s fine and how democracy sometimes works. One can’t limit elections to the majority only can one! Having made this formal point it is true that for reasons of stability as large a part of the SB vote as possible should be wrested away from Gota.

A plus point for Gota is his ability to get things done. Whether it’s sprucing up the city, demolishing low cost flats, evicting tenants, making beggars vanish by magic or fighting a war Gota, is a doer and has built himself a brand name in contrast to hobbling Ranil. SBs who see human rights and democracy as mollycoddling Tamils, cast an approving eye on Gota and see the Jolly Roger as a fitting escutcheon for his candidacy. Many in the business community see in Gota a firm hand to keep ‘rowdy’ workers in place and enforce discipline. Despite all this I see a pattern ‘over-determined’ by ethnicity; but for this anti-Gota ethnic polarisation yahapalana will fare much worse.

On balance, and if the UNP backs him (not necessarily a big if, depending on how the next 12 months may pan out), how strong a Gota-slayer will JVP leader AKD be? Before dismissing the option let’s recount the strength of his case. Prior to the local government elections many were saying “Cha, good buggers, they are not corrupt, they are disciplined and given a chance can do something; but cha, can’t vote for them no; can’t waste a vote”. Yes there is goodwill towards the JVP not only in subaltern but also in the middle classes. However, there is apprehension about whether it will “run wild” if entrusted with power; memories of 1971 and 1989-90 are still fresh. The possibility of AKD, as an anti Gota-Rex candidate of a broad alliance, with the UNP as the senior partner in control, is not ruled out though I suspect the UNP base will not stand for it. “What! Again! After one rotten egg in 2015 do we want another outsider who won’t let ‘our government’ execute policy?”

For these reasons I cannot, as of now, see any other strong anti Gota (or anti Basil or Chamal) candidate in the wings. It seems we are stuck with Ranil, warts and all, and it’s mostly warts. I would love to hear serious, strategically thought out views about other options; concrete proposals, names. The condition, the shared bottom-line, must be defeating any Rajapaksa who shows his face. Sans this, I am not much interested.