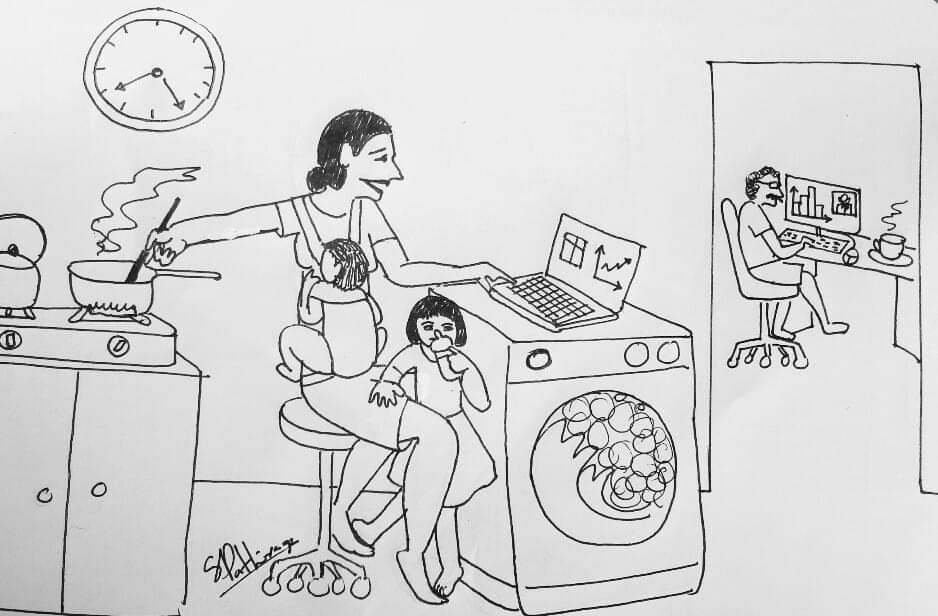 As the world celebrated yet another International Women’s Day this month, the focus turns to all things related to women – their rights, issues, status, to name a few. Since 1977, when the United Nations officially recognised the International Women’s Day, both government and non-government organisations in Sri Lanka have been implementing numerous programs targeting women. These programs range from women’s leadership development, women’s awareness raising, women entrepreneurship training, women empowerment, so on and so forth.

All these initiatives, no doubt, are organised with good intentions and, I speculate, may have some benefits. However, whether there has been a real, measurable impact is questionable. I say this especially because the same programs have been continuing for the past four decades. The program titles may have changed, but it’s a clear case of old wine in new bottles.

She smiled and asked me, “Vindhya, do you want to know the truth?… The truth is I wouldn’t have achieved any of this if my husband were alive!” I was speechless.

Despite these programs, if nothing really has changed in terms of women’s status in society, gender equality, and the plethora of women’s issues, the question that arises is, is the problem really with women?

Some years ago, I attended a women’s leadership forum in Colombo as a participant where a handful of women leaders of our country shared their success stories. Amongst the panellists was one woman who shared how she was widowed at a young age and with sheer perseverance and hard work built her business, whilst raising her children. At the end of the session, I went up to her and exclaimed how moved I was by her story and told her that she was truly an inspiration. She smiled and asked me, “Vindhya, do you want to know the truth?… The truth is I wouldn’t have achieved any of this if my husband were alive!” I was speechless.

According to the University Grants Commission of Sri Lanka, more than 60% of the undergraduate admissions to universities, every year, are female. However, women’s participation in the labour force is only 32%. Does this mean that women do not espouse work, become financially independent, and build a career? Most of us seem to think that the problem lies with women because the programs are all targeted at women.

The reason women don’t enter the active labour force or leave their careers to fulfil caring responsibilities or don’t progress in their careers compared to their male counterparts, has little to do with the level of awareness, skills, and capability of women. Focussing solely on women is treating the problem as if women operate in a silo and if we fix women, then everything will be fixed.

It’s a systemic problem involving our culture, attitudes, perceptions and biases. The fact is that women are discriminated against, marginalised and at a disadvantage because of being a woman, because of their sex.

This is far from reality – in reality, women operate in a world that still largely perceives them to be inferior, not as capable as men, and as having roles ascribed by society. Providing skills for women to navigate this scary world is not addressing the underlying problems or the root causes.

It’s a systemic problem involving our culture, attitudes, perceptions and biases. The fact is that women are discriminated against, marginalised and at a disadvantage because of being a woman, because of their sex. Society expects women to stay at home and raise children, organisations still perceive that certain jobs are better done by men than women, and that women, for whatever reason, are not as capable as men.

Especially when it comes to top-level positions, irrespective of whether it is a public or private organisation, women are expected to think and act differently; they are expected to adapt to a system that has set the rules and boundaries for them. And hence we have leadership programs, empowerment programs and various advancement programs. But is it the women who need these programs, or do things need to start changing at a deeper level within our society?

We need to start thinking differently and changing the way we see women’s status and role in our society. Bringing all women into a room and talking about their challenges is ignoring a big element in the system that is also a big part of the problem – men. In all fairness, there are many men who genuinely want to advance gender equality and create a better environment for women. Men need to be involved in these forums and solutions need to be found in conjunction with men. Solutions to systemic problems cannot be found in a vacuum; they need to be co-productions between the different players in the system, in this case, both men and women.

It takes years to change a system, but if we start by moving small parts, then slowly the whole system starts to move and change. For example, as a start, the lawmakers can make provisions for paternity leave in the labour and employment laws in Sri Lanka.

We need interventions that are aimed at fixing the system. This can be in the form of national level or organisational level policies that foster an environment where women can flourish. It’s time that political and organisational leaders are ‘enlightened’ that the problem is not with women and that it is in fact up to these leaders to build a more inclusive system that encourages men and women to engage with each other on the same level. Whilst appreciating some of the changes introduced by the consecutive governments, there is still a long way to go. For example, the 2020 Global Gender Gap Report ranked Sri Lanka 116 out of 156 countries on gender equality, behind countries like Bangladesh and Nepal, an eye-opener for all of us.

The purpose of this article is not to offer a list of solutions to fix the system – this is not something that can be achieved overnight. It takes years to change a system, but if we start by moving small parts, then slowly the whole system starts to move and change. For example, as a start, the lawmakers can make provisions for paternity leave in the labour and employment laws in Sri Lanka. They could introduce more progressive views about women’s role and identity in society in the school curricula, so that future generations of our country grow up with different perspectives. Introduce a gender equality strategy for the country.

But most importantly, have a mechanism to report progress of gender equality initiatives and monitor whether the changes introduced are being enforced. These small changes will undoubtedly have positive and lasting consequences for women, in the years to come.

Until we change the system, where traditional, stereotypical views and omnipresent biases of women are eliminated, more International Women’s Days will come and go but women will remain in the same old position.