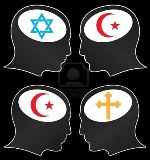 By Kishali Pinto Jayawardene
Religious fundamentalists of all faiths have just one attribute in common. The beliefs that they profess are a mere cloak, hiding maggots crawling around in their minds feasting on hate, bigotry and ignorance. These are not new tales but rather the lessons taught by humankind’s devastation through millennia as a result of religious bigotry.

Insanities of religious fundamentalists
Umberto Eco captured the devious fight of the Roman Catholic Church in the Middle Ages to keep all knowledge and wisdom contained in ancient writings to itself, most inimitably in his classic book, the Name of the Rose (Vintage, Random House, 2004). This must surely be compulsory reading for all those who recognize the terrible value of history in our lives. That fight for knowledge still captivates us as it is the common fight of the enlightened, regardless of what age we live in.

Later, the splintering of the Church was propelled by this same craving for power and riches on the part of its spiritual leaders, leading to reformation movements which took their own historical turns in the different focal points of Europe as we know it now. In modern day times, we continue to see million dollar evangelical missions around the world led by men and women, whose lifestyles are the very opposite of what Christ preached. Yet these missions continue to dupe people, depriving even pensioners of their savings and converting others through material gain rather than spiritual transformation.

We see the hate filled actions of the Muslim fundamentalists whose calls to jihad against those contemptuously termed as ‘unbelievers’ refute all that the Prophet’s life stood for. Not surprisingly, hate filled chants of Hindutva believers echo the very same insanities of the Muslim radicalists whom they profess to despise. And we see too, the actions of Buddhist priests in Sri Lanka, whose dabbling in profit making ventures and political interests have almost irredeemably corrupted the great message that the Gautama taught.

The shocking nature of the Dambulla incidents

In many countries across the world, these extremists are in the minority and their views are not subscribed to by decent ordinary people. This was the case in Sri Lanka even during the height of the war but now question marks are emerging as to whether the degeneration of this multi-ethnic and multi-religious society has reached the nadir. Most recently, this extremism was seen shockingly in Dambulla where a mob led by Buddhist priests virtually stormed a mosque, with (as irrefutably televised) one monk throwing apart his robes at the gateway to the mosque and a head priest of the area behaving more in the manner of a common street ruffian when reacting to a local woman who approached him with pleas to let the local Muslims continue to worship at the mosque.

Photographs of the damage done and the desecration of religious books were being circulated even weeks after the incident. Inflammatory statements issued by the incumbent in the office of Sri Lanka’s Prime Minister together with the inaction of law enforcement officers while clear breaches of the criminal law took place, shows us the extent to which the Rule of Law has been tossed to the winds.

In gentler times, the Sinhalese people were quite sharply distinguishable from their politicians who, to misapply Hobbes perhaps un-forgivingly, were nasty, brutish and lamentably short in their political vision. But now one of the main aims of the late Velupillai Prabhakaran’s historical project (quite apart from Tamil Eelam), namely the destruction of Sri Lanka as a pluralistic, liberal society and the degeneration of its people appear to be well on its way to full fruition, ironically enough in the post war years. To those who point to the Dambulla incident as just one stray aberration are only blinding themselves to the signs all around them of increased xenophobia and religious intolerance.

Moreover, the impunity with which the instigators of the mob permitted themselves to be televised on local media was equally shocking. These scenes were shown on pro-government television stations, with their authenticity belying later claims that the footage had been ‘manipulated.’ The footage clearly showed facial expressions in full consonance with the emitting of abusive words.

The injunction meanwhile by mob leaders in robes that, what they are doing now in Dambulla will soon be the pattern all over Sri Lanka was a disturbing forerunner to the season of Vesak, that most serene religious festival which Buddhists observe. A greater contrast could not be seen between the ugliness of the April 2012 Dambulla incident and the peace that Vesak symbolizes. Meanwhile, the silence of the disciplinary councils of the Sangha continues to be most disheartening.

The absence of justice and the law

Yet, the Dambulla incident should not be surprising given the fundamentalist ethos that now drives Sri Lanka’s political process. Moreover politicians and corrupt priests are not the only ones responsible for hijacking religion in order to satisfy their maggot ridden craving for money and power. This caution needs to be made in the context of some who believe that recourse to the law is an automatic solution to the ills of religious extremism.

Not so long ago we had a Chief Justice who, as the International Bar Association rightly characterized, was a ‘person of influence’ in Sri Lanka’s ‘judicial, political and religious’ sectors (see Justice in Retreat, a Report on the Independence of the legal profession and the rule of law in Sri Lanka, May 2009). This was a reference to the unprecedented linking up of the judiciary with political and religious interests, as openly manifested.

During this period, if one recalls, the University Teachers for Human Rights (UTHR- Jaffna) documented a similar dispute over unauthorised religious structures. Its description of the events at that time was telling. In that instance, a Trincomalee magistrate had ordered the removal of unauthorised religious structures in the city, including a Buddha statute as well as four Kovils. The advice of the former Attorney General had been sought and action filed on that basis.

This move was opposed by a Buddhist priest who went before the Supreme Court alleging that the magisterial order had been issued on the advice of the former Attorney General who was a Hindu and a Tamil, and was also a former resident of Trincomalee. (see UTHR, From Welikade to Mutur and Pottuvil: A Generation of Moral Denudation and the Rise of Heroes with Feet of Clay,’ Special Report, No. 25, 2007.

The UTHR observed rightly that this petition “amounted to a personal attack on the Attorney General citing his minority affiliation, when in fact he was carrying out a task assigned by the Government. As such, the Supreme Court might simply have refused leave to proceed. Instead, former Chief Justice Sarath Silva advised the Attorney General to withdraw the case in the Trincomalee District Court in return for the Buddhist priest to withdraw his petition.’

Then as now, the corruption of the justice machinery when powerful political interests are at play, hidden as they are beneath a veneer of nauseatingly unctuous religious sanctimony, should not be underestimated.

Calls therefore for the law to be observed in dealing with the disputed legitimacy of religious structures rather than resorting to mob rule, are well and good. They certainly need to be made. However, an appropriate caution must be struck. Given the ravages that Sri Lanka’s legal and judicial institutions have been subjected to during the recent decade, the safety that the law affords cannot automatically be presumed to bring justice in its wake.

This is a fundamental misapprehension that must be guarded against. In what may be the only effective pressure tactic left to us, Sri Lankans who have not lapsed into bigotry and comprising the silent majority, need to speak out against the atrocities that are being committed in the name of religion and patriotism. Powerful public opinion must be heard against this veritable madness.

That said, it is certainly a dangerous cauldron of religious hatred that is simmering now. Its eruption may well be disastrous not only for secular liberalism in Sri Lanka with its back pressed anyway against the wall but also for political leaders who encouraged the emergence of religious fundamentalism in the first place for the political gains that it may (and in fact, did) bring. Let this warning be taken well to heart.
ST