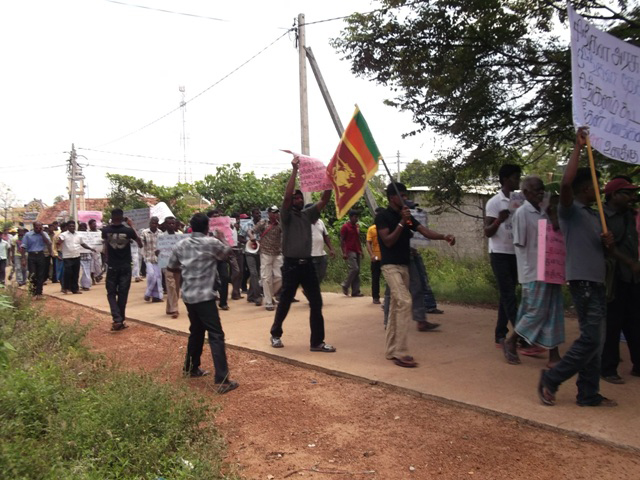 D.B.S.JEYARAJ
Sri Lanka’s national flag was disgraced and disrespected in the Northern town of Kilinochchi on Saturday March 30th 2013 when a motley crew of “State Terrorists” launched a stone attack on the Tamil National Alliance (TNA) office premises while a political discussion was in progress.

At least fifteen persons including two Policemen sustained injuries in the stone attack which also damaged parts of the office building and a few parked vehicles.

The Tamil National Alliance(TNA) which is the premier democratic political configuration of the Sri Lankan Tamils was holding a “Makkal Santhippu”(peoples meeting) in Kilinochchi on March 30th Saturday at the party office precincts. These Meetings where people of the area meet their elected representatives and engage in discussions about current developments is a familiar feature in contemporary Tamil politics.The TNA comprising four political parties contests elections under the house symbol of Ilankai Thamil Arasu Katchi(ITAK).

The discussion was held in the compound under a Jak tree with chairs and benches being placed in the open.Around 60 -65 people including some women participated along with four TNA members of Parliament. The meeting was chaired by senior Jaffna district MP Somasuntharam Senathirajah known as “Maavai” Senathirajah.Jaffna district MP’s E.Saravanabavan and S. Sritharan along with national list member MA Sumanthiran were also present.Sritharan is the TNA organizer for the Kilinochchi electoral division within the Jaffna electoral district.

The People’s meeting began at 9.30 am.Due authorisation for the meeting had been obtained beforehand and three Policemen were stationed at the premises to provide security .After the four MP’s spoke briefly a question and answer session took place. There was much interest amidst the gathering about current events. Lots of questions were raised and answers given by the TNA parliamentarians.

While the meeting was in progress another exercise of a different type was happening close by.Young men transported in buses and vans were alighting in the junction area known as “Kaakka Kadai Santhi”.Many of them were in an inebriated state. According to Kilinochchi residents some of the men assembling at the junction area were imbibing liquor from small bottles openly.Sensing trouble many people left the area or went into their houses.

The men dropped in vehicles at Kaakkaa Kadai Santhi were a motley crew comprising different sections of society. Some were former members of the Liberation Tigers of Tamil Eelam (LTTE)who had been set free after “rehabilitation”. Some of them had been recruited as members of the civil security force formerly known as homeguards.Others were young members attached to the Kilinochchi office of the Sri Lanka Freedom party(SLFP). They were involved with the “Nil Balakaya” of Namal Rajapaksa MP. The Kilinochchi SLFP organizer is Ms.Geethanjali Naguleswaran.In addition to these persons there were also members of military intelligence, national intelligence and Police intelligence all of whom were in civils.

The group comprising both Tamils and Sinhalese and numbering around 75 -80 began marching in procession along the Main Jaffna-Kandy road or A-9 highway.They held aloft Sri Lankan national flags and walked down the road passing the Kilinochchi Police station.Some uniformed men attached to the Traffic police walked alongside the procession.They kept marching for about 150 to 200 metres till they reached the vicinity of Kandasamy Kovil the temple dedicated to Lord Muruga.

The TNA office is situated near the temple along a short by lane branching off from the A-9 road at “Kandasamy Kovilady”.The procession halted at this spot and started shouting slogans in Tamil and also Sinhala. They were very abusive of the TNA in general and M P Sritharan in particular. Some slogans were supportive of President Mahinda Rajapaksa and son Namal Rajapaksa. A few slogans were in praise of Sri Lanka.The TNA however went on with their meeting despite raucous cries renting the air.

At one point a small group of demonstrators split from the main group and moved down the by lane coming closer to the TNA office premises.They parked themselves at a convenient spot and kept chanting anti-TNA slogans. Thus the TNA was subjected to a twin –pronged verbal assault from two points.

Suddenly some in the group at the far end of the by lane began pelting stones at the TNA meeting in progress.While this was going on others in the group kept shouting slogans while waving the Lion flags proudly in the air.

Interestingly many of the stones thrown were actually concrete nuggets. Cement had been moulded into chunks, dried and were now being used as stones for throwing. These novel unorthodox weapons were rather lethal.The stones fell among the gathering in the compound causing injuries to some.

When the stone throwing began the Police personnel assigned to the MP’s as bodyguards immediately pushed the people’s representatives into the office building. There were two policemen to each MP carrying firearms.The eight bodyguards however were intent only on safeguarding the MP’s they had been detailed to protect.It was not their task to restrain or stop the stone throwing. Some of the elderly persons and women also took refuge inside the house that functions as the party office.The younger members in the gathering however did not retreat. Some picked up the stones and cement nuggets and threw them back at the attackers.

In a surprise move the group standing close to the office premises and shouting slogans whipped out stones from bags and knapsacks and started throwing them. Now it was a twin pronged physical attack!Some in the group broke out and made a beeline towards the gate. A few entered the compound.

Some of the youths in the gathering responded swiftly to the new danger. They fought with the intruders engaging in fisticuffs.While this resistance was on, the cops assigned for security managed to beat back some of the intruders after a scuffle and lock the gates.

Two of the intruders grappling with the youths were trapped inside. The youths overpowered them and handed over both to the Policemen asking that they be arrested officially. The Policemen presumably knowing who the intruders were opened the gate and allowed them to escape.Threafter they shut the gate again.

Meanwhile another intruder was discovered inside the premises.When apprehended the man produced an official identity card stating he was a Tamil Police officer from the CID.However he did not seem fluent in Tamil.He spoke the language with a funny accent. Again the police assigned for security refused to detain him and once again opened the gates to let the man exit.

With their arsenal of stones and concrete nuggets being exhausted the attack came to an end. The State terrorist squad then started marching back still shouting abusive slogans and waving the lion flags. The entire “operation Hailstone”hd taken 30 minutes from 11.45 am to 12.15 pm.The demonstrators got back and clambered aboard their vehicles fortified with more intoxicating bottled brew.They returned victoriously after a good day’s work where the Lion flag was kept flying high.

The house serving as Party office was damaged in the stone attack. The roof was cracked in many places. Window panes were smashed. The door, electricity meter etc were also damaged. So too were some furniture and a few of the parked veicles. One motor cycle was extensively damaged.About twenty of the people including two Policemen received injuries. Thirteen of the injured were taken to the Kilinochchi hospital for first aid treatment.

MORALE
Despite the attack the morale of the TNA gathering was not shaken. The youths insisted that the meeting be continued. So it was resumed again and wound up after further discussions.

Meanwhile the TNA Parliaentarias had all rung up the Police in Kilinochchi and complained as soon as the attack commenced. Predictably the Police arrived only 90 minutes later.

The Police included the Kilinochchi HQI and also two officers of ASP and SP rank.The Police dutifully recorded statements and questioned those present about the incident. When the MP’s inquired who the demonstrators were the Police feigned ignorance. When asked whether they had obtained a permit to go out in a procession and demonstrate the Police replied that no permission had been obtained.

When it was pointed out that permits for a procession had to be obtained at least six hours before it commenced the Police remained silent. The Police had no satisfactory answer when asked as to why an unlawful procession was allowed to march past the Police station and why traffic police were detailed to accompany it.

In a sense the Police too were helpless as the stone throwing operation was obviously an “officially sanctioned unofficial demonstration”imposed from above by a higher authority.

The TNA had arranged for another Peoples meeting at Pallai inside the peninsula in the evening. The party decided to continue with the event in spite of what had happened in Kilinochchi. When the MP’s went to the Tutorial institute in Pallai where the meeting was to be held they found a large turn out. More significantly a very large contingent of Police was there to provide security. The meeting went off without any mishap.It was learnt that another demonstration of the same kind had been planned for the TNA at Pallai also but had not taken place as scheduled.

The stone attack on the TNA meeting received and is receiving world-wide publicity. Once again the Rajapaksa regime’s reputation is tarnished. Earlier Non – violent political protests organized in public places by the TNA were targeted but in this instance a meeting held within party office premises was attacked crudely.

The masterminds behind this blatant act of “State terror” do not realise the damage they are doing to Sri Lanka’s image by exercises like this. Adding insult to injury was the was the “patriotic” waving of lion flags while the dastardly attack was in progress.An indelible black spot on the country’s national honour!It is indeed ironic that a great big fuss is often made about honouring the national flag with due respect whereas this motley crew of “patriots” engage in unacceptable and inappropriate violence waving the lion flag. The stone attack on the TNA is indicative of Sri Lanka regressing into the “Stone age” under the Rajapaksa regime.

TAILPIECE:The “Daily Mirror” reports thus about the Kilinochchi incident. “When enquired about the incident police spokesman Buddhika Siriwardana said a group of people had stoned a TNA meeting and fled the scene. Investigations are carried out to arrest the suspects”. Its good to see that the Police spokesman has a sense of humour!

DBS Jeyaraj can be reached at [email protected]
DBS