Standing in Protest and Solidarity After the Easter Attacks – WAN 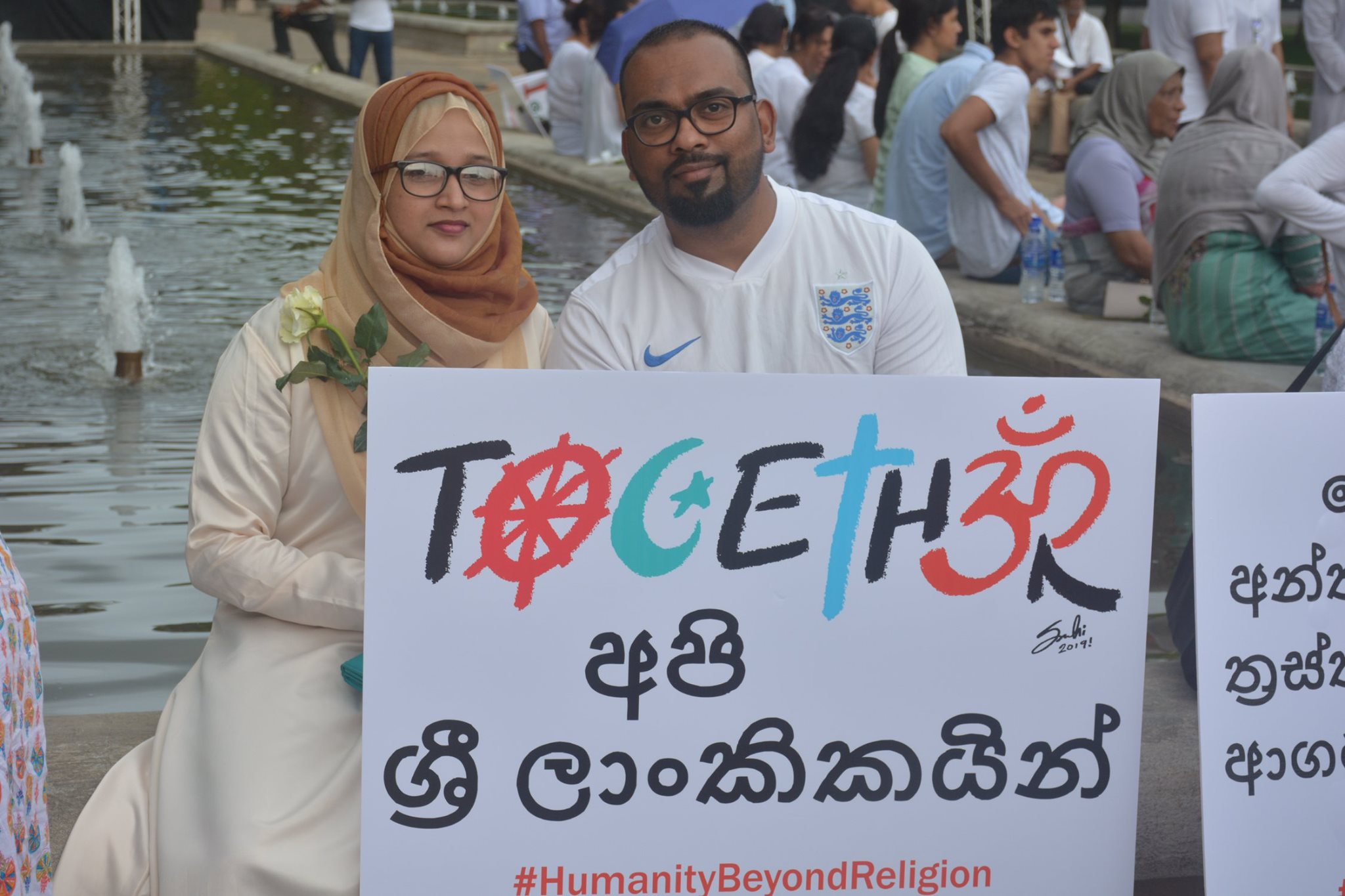 by The Women’s Action Network.

On Easter Sunday, terrorists linked to Islamic extremism bombed churches and hotels. Over two hundred and fifty dead on Christianity’s holiest day, but we as Sri Lankans have still not been able to collectively mourn this heavy loss. As if on cue, Buddhist extremists used the attacks to target Muslims and refugees. Eager for a political win, the State has not prevented violence and instead enabled hate mongering and fear while civil society has done little to counter the hate. With women’s rights hanging in the balance, we strongly protest extremism of every kind and state inaction that enables it.

In Negombo, mobs threatened refugees and asylum seekers from Muslim countries. Although many of the migrants are Christians, Ahmadi Muslims, or belong to other persecuted groups, they were labelled Islamic terrorists. Pressured by angry mobs, landlords evicted vulnerable migrant tenants overnight, forcing them to seek police shelter.

Mobs targeted Sri Lankan Muslims too. On May 5, the eve of Ramazan, an angry mob attacked Muslim-owned shops, homes, and vehicles around Negombo. Many were terrified to visit mosques for evening prayers. Recently, the chief prelate of the Asgiriya Chapter insinuated Muslims were ‘traitors’ who “must not be allowed to live in freedom” and called for a boycott of Muslim businesses and eateries. A Local Authority Chairman is leading an attempt to close stalls of Muslim vendors from a local market under the pretext of security. Thus, organized and systemic efforts are underway by elements with vested interests to target and adversely affect the economy of the Muslims. Silence against these positions from the powers that be is disconcerting.

The State failed to prevent both the Easter attacks and the riots. All it did was to shut down social media to prevent hate speech from spreading and promise compensation for property damage. These efforts seem hollow given the Presidential pardon of Gnanasara Thero, a hardline monk accused of inciting anti-Muslim violence, just a week after the Negombo riots. When parliamentarian Rathana Thero began a hunger strike demanding that two Muslim Governors and a Minister resign for alleged links to the Easter attacks, hard-line MPs expressed support for that claim, and monks like Gnanasara Thero warned of a ‘carnival’ if they did not leave office by a certain date and time. Mobs in Kandy forced Muslim shops to close and hoisted black flags. To prevent further violence, all Muslim Parliamentarians who were Cabinet Ministers, State Ministers and a Deputy Minister resigned.

But the State has done more than to accommodate extremists. After the Easter attacks, authorities rounded up Muslim men throughout the country for arbitrary arrest under Emergency Regulations and the Prevention of Terrorism Act (PTA). In Dharga-town and Akurana, Muslims who owned Qurans or had notebooks with Arabic script were arrested. In Panadura, a Muslim youth was arrested and detained through a 90-day Detention Order issued under PTA for having a Bible in his house. Fearing arrest, some Muslims started dumping their Qur’anic notes in the garbage and burning notebooks that contained Arabic script. A father and son in Mannar were arrested for having chlorine in their washing area and charged for possessing C4 explosive. A woman eight months pregnant was arrested for half-covering her face. A destitute Muslim woman was detained for wearing a dress that supposedly had the Dharma chakra on it whereas it actually depicted a ship wheel.

In all, over 2,000 Muslim men and some women have been taken into custody. While many have now been released, as of 18th June about 360 remain detained, of which many are under 90-day detention orders that give Magistrates no power to release. Some had arbitrarily been detained without valid Detention Orders. In a country where the PTA and Emergency Regulations have been used to torture and disappear with impunity, we are alarmed as history threatens to repeat. We acknowledge the commitment and dedication of those lawyers and activists who have volunteered tirelessly in ensuring the release of the many arrestees and express our gratitude to them. The State has an obligation to protect its citizens and the rule of law.

One of the State’s first actions in response to the Easter Sunday attacks was to ban the face veil, although to date no one wearing a burka or niqab has threatened national security. Since the restriction took effect, many Muslim women have not left their homes. The Secretary to the Ministry of Public Administration issued a governmental circular dated 29th May 2019 prescribing that government officers and service seekers adhere to certain stipulated attire. This circular effectively proscribes the usual or customary garments hitherto worn by Muslim women, such as the abaya, head-scarf, shawl or shalwar-kameez. It is telling that after attacks by Muslim men wearing western clothes and carrying backpacks, the State’s first order of business was to regulate Muslim women’s bodies and women’s dress. The hardship is not limited to Muslim women alone. If women are to wear only the sari or osari in government offices, no woman could wear skirt and blouse, business suits, salwar kameez or other similar dresses. As the Human Rights Commission of Sri Lanka has noted, there is no valid link between the prohibited forms of dress and security breaches. The Cabinet-approved new circular adding abayas and head coverings does not fix the problem; the fact remains that the State has not shown any legitimate national security reason to regulate women’s dress.

In the weeks since the face veil ban took effect, Muslim women have been asked to remove headscarves and abayas at government offices, Court complexes, hospitals, and schools and even denied access to basic service such as medical care. This ban has given a licence to express hate and puts women at risk. In Palai in the north, when an abaya-clad Muslim woman boarded an overnight bus, passengers called her a terrorist and forced her out alone in the middle of the night. Many schools are compelling Muslim girls to remove their shawls and trousers. Some mothers have been forced to remove their head covers when taking their children to school. This has led to parents removing their children from these schools and either enrolling them in Muslim schools or forcing young girls to stay at home. Public health experts worry that maternal health could decline as Muslim women forego hospital care and deliver babies at home. As we can already see, the ban will further alienate Muslim women from Sri Lankan society. Some with means are exploring the option of migrating. But as is often the case, poor Muslim women have no escape.

It is not enough to call out these problems. Civil society, the international community, and above all the Sri Lankan State must do more.

When reports of sexual violence against Tamil women emerged in 2009, most stayed silent. Feminists and women’s groups did not highlight the issue until 2011. The result was that Tamil women targeted in the last stages of the war felt abandoned and distrustful of groups with newly proclaimed interest. The same patterns are emerging today, this time with Muslim women and men at the centre. As Muslim men are rounded up; Muslim women targeted for their dress; and refugees and asylum seekers caught in the crossfire, too few are speaking out against religious extremism and the state actions that foster it. Civil society must do more to stand up for basic human dignity, wherever it faces assault. We marched on the streets last October to protest a constitutional violation and to make right a constitutional crisis. Today, as the President calls the 19th Amendment ‘a curse’ drafted on the behest of NGOs, it is time for civil society to stand in solidarity to protect our democratic norms.

The international community also shares the blame. Europe, home of the burqa ban, is no stranger to far-right protests against Islamic dress. Even though Gnanasara Thero signed an MOU with Myanmar’s Ashin Wirathu in 2014, the international community is slow to see Buddhist extremists as the aggressors or Muslims the victims. Quick to offer counterterrorism assistance, the West has been silent as Sri Lanka’s Muslim community faces discrimination and violence. Islamic terrorism is a global problem, and the Easter Sunday attacks were an attack on all Sri Lankans. But Buddhist extremism is no less a problem in Sri Lanka and failing to address it leaves all our citizens at risk. To this end, we welcome the recent statement by the UN High Commissioner for Human Rights and call upon her to continue to monitor the situation of minority rights.

But above all, the Sri Lankan Government bears the responsibility to protect the rights of all its citizens; Sinhala, Christian, Buddhist, Tamil, Hindu, and Muslim. Instead of appeasing Buddhist extremists in a cynical ploy to win votes later in 2019 and 2020, it must stand for its people. Sri Lanka has been down this path repeatedly. Communal violence threatens the very fabric of democracy, and the State must do more to prevent it. To the President who ran on a platform of good governance: the 19th Amendment is progress, not a “curse.” We know from our recent past that abuse of executive power obstructs freedom and harmony while allowing corruption and lawlessness to flourish. The President must respect checks and balances, not abuse Emergency Regulations to wield or usurp excessive power.

Women’s Action Network calls on the Sri Lankan Government to:
(1) Create a space for all Sri Lankans to mourn the lives lost on Easter Sunday and offer condolences to the families.
(2) Devise and implement effective measures leading to proper reparations for those directly affected by the Easter attacks and their immediate family members, including children.
(3) Promptly investigate and prosecute those responsible for anti-Muslim incitement, including those responsible for rioting and violence, and counter continued hate speech and incitement by Buddhist extremist groups.
(4) Ensure that counterterrorism arrests are done based on reasonable suspicion and due process is followed. In particular ensure law enforcement officers and armed forces who are given powers to arrest and detain through the Emergency Regulation adhere to the 20 guidelines issued by the Supreme Court1.
(5) Repeal the emergency regulation that arbitrarily controls women’s dress.
(6) Protect refugees and asylum seekers and denounce misinformation campaigns that threaten their safety.
(7) Respect the 19th Amendment and checks and balances, rather than abuse Emergency Regulations to justify unrestrained executive power.
(8) Reverse course on the death penalty and recognize there is no need to end a 43-year moratorium on capital punishment.
Issued by the Women’s Action Network, a collective of 9 women’s organisations from North and East.