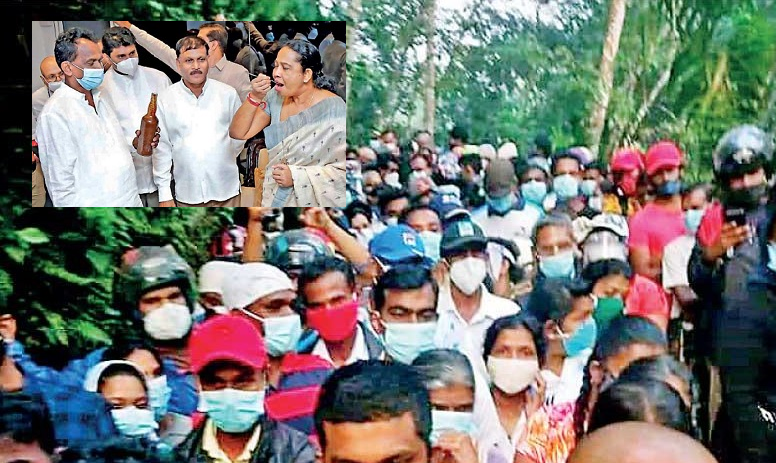 Less than two months ago, a self-professed holy man ( Kapuwa) from Kegalle became the embodiment of the Sri Lankan ingenuity. The man who had no medical background concocted a miracle COVID-19 cure after being told of its recipe by Goddess Kali in sleep. (He is not the only one; some years back, a Math professor from a local university published a research into the Chronic Kidney Disease also guided by divine intervention).

Dammika Bandara’s miracle drug dominated prime- time television news. Health Minister Pavithra Wanniarachchi took a spoonful of it in front of TV cameras. Bandara was entertained in Parliament, and the Speaker and a group of Parliamentarians drank the stuff in the full glare of cameras. The President ordered further research into the local concoction. Some government Ministers defended its sheer absence of scientific basis. Local medical authorities who held deep reservations on the product hesitated to voice their opinion. After much dillydallying, they gave ethical clearance for further research into the drug.

Crowds thronged around the residence of Bandara to get the magic potion. Good practices of social distancing were thrown to the wind. If you have a magic cure, why worry about getting ill?

That farcical spectacle has now exploded on the face of the health minister. She and her husband have been tested positive for COVID-19, her office in the Health Ministry was shut down and staff had been told to undergo self –quarantine. She is the fifth Parliamentarian to contract the virus. Before that, another parliamentarian who consumed the miracle cure was tested positive for the virus.

The real cost will never be known. For many thousands, who were gullible enough to stay in long queues to buy his magic potion, and others who drank it and thought they were immune, and hence lowered their guard are the nameless victims.

Health Minister Pavithra Wanniarachchi took a spoonful of it in front of TV cameras. Bandara was entertained in Parliament, and the Speaker and a group of Parliamentarians drank the stuff in the full glare of cameras

Though there still are fools who hang on to the promise of Dammika Paniya as it is popularly known, the farce has now reached its predictable end. However, its real cost will never be known. For many thousands, who were gullible enough to stay in long queues to buy his magic potion, and others who drank it and thought they were immune, and hence lowered their guard are the nameless victims.

The real culprits of the scam will also never be brought to justice. A popular pro-government TV channel that promoted this scam would move on to publicize another patriotic hoax. Minister Wanniarachchi who sought many forms of divine remedies, including dropping charmed pots to the rivers, will carry on her duties. Dammika Bandara himself has argued his medicine is fail-safe, and those who contracted the virus after drinking his stuff might not have taken the recommended dose. The local health officials and Ayuvedic authorities have not cautioned the public that what they promoted was a hoax. Only the e-bay, the e-Commerce site had removed its listing.

The fiasco of miracle cure is microscopic of a greater ill, a regressive notion of patriotism that had beset the Sri Lankan society at present, and being whipped up and fostered by the current government. Its supporters and voters are especially vulnerable to be duped by this. And it comes in many forms, including when the Port Trade Unions clamour to run the Colombo Eastern Container by themselves –How can they, when they cannot properly run the only SLPA-owned terminal? The world’s largest shipping liner, MCC that fed into the bulk of cargo handling of the Jaya Terminal had pulled out to avoid the congestion there.

This regressive patriotism overlooks the structural weaknesses and limits of individual and collective capacities. It gives a false sense of confidence to folks who have nothing much to celebrate. This is not uniquely Sri Lankan. From Madagascar where the state also patronized similar concoction to a large swathe of the White Working Class that pinned their hopes on Donald Trump, people have tended to place trust on conmen who speak what they like to hear. They relied on oversimplified solutions of which main criteria being a false national pride.

The first step towards progress is self-awareness of individual or collective limitations. The regressive patriotism of the present time blinds the nation of its limitations giving it a false sense of confidence. And politically affiliated wheeler-dealers who own television stations, among others are preying on this specific collective weakness. Also, aspiring states emulate the successful strategies of their peers. Emulation is the most important element of the rise of nations, as the modern history of international political economy would attest.

But, how can you emulate others when a bunch of nincompoops think they are the best, and want to build the wheel every time, and run the show on their own? That is the central feature of the failure of a majority of nations that received independence in the second half of the 20th century.

Dammika Paniya might have made gullible few hundred getting infected, and caused a few deaths. But, the successive government policies that have whipped up this regressive patriotism, that turned back on reason, science and commonsense economics have robbed the people of this country both peace and prosperity for over the seven decades since independence.