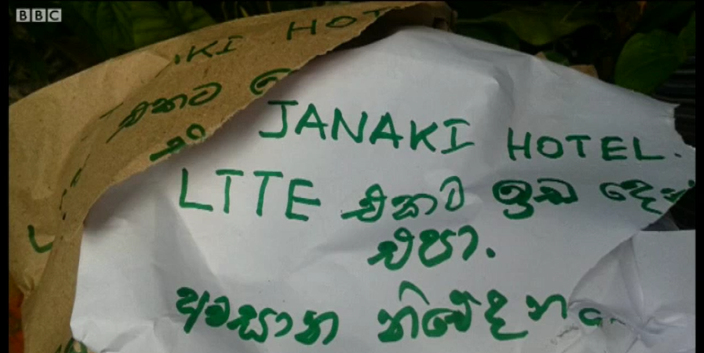 [Final warning to Hotel Janaki]
By SriLanka Brief
For the third time in recent times a media training event organised by the Transparency International Sri Lanka was threatened and disrupted allegedly by state security agents on 14th October 2014 in Colombo.

An unknown outfit called ‘Patriotic Force that saved the Country’ had threatened the organisers, the venue and participants including resource persons by posters, SMS messages and phone calls. Their threatening messages said that ‘the workshop is organised to support the LTTE and we will attack the awards presentation ceremony to investigative journalists if it is held as planned.’

One of the resources persons of the event, journalist Victor Ivan, funding editor of Ravaya weekly told media that he too received a threatening SMS on his mobile phone. According to Ivan only the security forces are able to mount such an operation to intimidate and disrupt a media training event. ‘ The government should be a ashamed’ he had added.

The owners of the Janaki Hotel refused to allow the awards presentation ceremony to be held after they received a ‘ final warning’ threat. Two persons came on a motorcycle without a number plate had thrown a paper ball with the ‘Final Warning: Do not allow the LTTE’.

One of the journalist participant, Janur Kichilan form Kurunagala had received phone call threatening that his legs will be broken and hanged if he participate in the workshop.

Another participant journalist Amadoru Amarajeewa of Trincomalee had received threatening calls form the phones belong to state intelligent officers.
The workshop was held successfully in an undisclosed location in Colombo, the convener of the Free Media Movement Sunil Jayasekara told BBC Sinhala service.