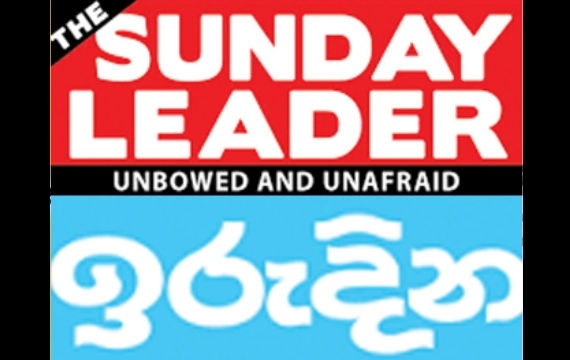 It is reported that the “Leader group of Companies Pvt Ltd ”  publishers of the Sunday Leader and the Sinhalese Irudina Sunday newspapers is  run under the scrutiny  by its close  association of the Minister of Finance Ravi Karunanayake and the former Governor of the Central Bank Arjun Mahendran.However in spite of it the members of the staff of the Leader group of Companies Pvt Ltd had not received remunerations for the last two months.

In addition it is also learnt that the Director of this Company is one Akbar a close relative of Minister Ravi Karunanayake’s wife’s close relative.

It is reported that on the issue of  the non payment of salaries, employees provident fund, employees trust fund.Minister Ravi Karunanayake, Arjun Mahendra and Arjun Aloysius had been notified.In addition in regard to misappropriation of funds of the Company the Accountant Najith de Alwis. But the management had not taken notice of it and not taken any steps re resolve the salary issues..

In this regard the employees for violating  their fundamental rights. had directed charges to the administrators and the management.The members of the editorial staff of the Sunday Leader  and the Irudina  newspapers have decided not to work this week expressing deep concern on the non payments of salaries..

For flouting the fundamental rights, their occupational rights the staff of the Leader group of companies Pvt Ltd intend to make the other media institutions know of this situation the editorial staff and others have decided..