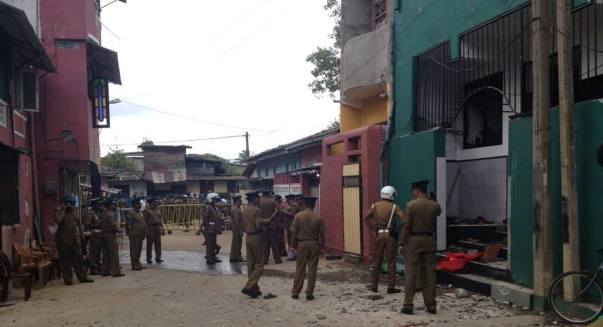 The following is the a statement issued by ministers, A. H. M. Fowzie, Rauff Hakeem, Rishard Bathhiyutheen, A. L. .M. Hisbullah, Faizer Musthapa and A. R. M. Abdul Cader

we urge the Head of State to immediately conduct an independent investigation into this sad and dastardly act of violence inflicted on a peaceful congregation of devotees assembled in the sacred sanctuary of a Mosque. We earnestly implore your Excellency to instruct the law enforcement agencies to apprehend and punish the perpetrators of this anti-national act.

This is viewed as the most recent sequel to a chain of events that have occurred in the country for several months. The lukewarm and ineffective measures taken by the law enforcement agencies on previous occasions, when Muslim communities and their mosques were deliberately attacked, seem to have emboldened some extremist groups who seem determined to create chaos in the country that is still in search of national reconciliation after a prolonged war. The notion that there are elements in our society who can act with impunity, should be totally eradicated from the public perception that has now taken root in our society.

This latest incident has created tension and fear among Muslim communities in Colombo Central and Colombo North areas such as, Grandpass, Maligawatta, Maradana and Kettarama, where normalcy was restored only after several hours.

We urge His Excellency the President and the government to take decisive action to halt this trend of openly espousing religious hatred towards the Muslim community. The defeat of terrorism and the end of the war should pave the way towards peace and prosperity for all citizens. It should not be construed as an, opportunity to establish the hegemony of one single group of people. As Ministers of the State, we implore you to take urgent measures to pay compensation to the affected victims.

We urge you to set up a credible institutional mechanism that would ensure inter religious harmony. The state has a fundamental duty to ensure that our religious freedom is preserved in this multi-ethnic and multi-religious nation. We do not understand how inflicting violence on a religious minority can be construed as promoting or protecting another faith.

As Muslim Ministers, we appeal to His Excellency the President and the most venerable, Buddhist prelates to take appropriate action to halt this spread of mob violence and zealotry.

This is a collective appeal made by Members of the government whose signatures appear below.
http://www.island.lk/index.php?page_cat=article-details&page=article-details&code_title=85651