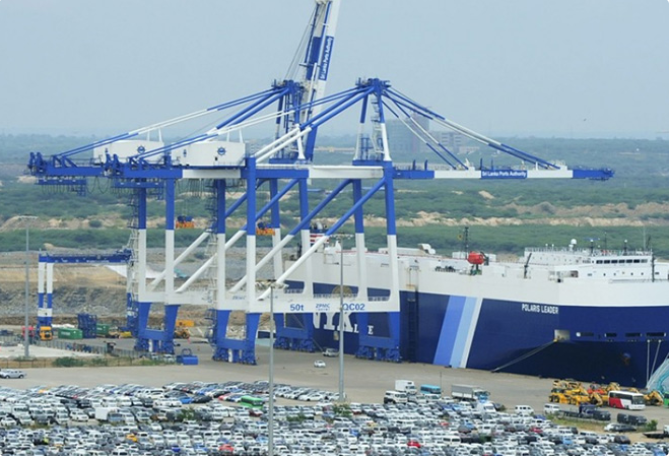 Alfred Dundas Taylor, a civil architect to the Admiralty in the UK, Head of the Marine Survey Department was the first to have proposed the Sethusamudram Shipping Canal Project, in 1860. This canal cut across the Hindu God Rama’s bridge, also known as Ram-Setu. According to Hindu mythology, the bridge was built by Lord Rama, connecting the Southern Indian shore with the western shores of Sri Lanka. The 44.9 nautical-mile long canal would bypass ships navigating Sri Lankan southern ports, opening up a shorter, continuously navigable sea route around the Indian Peninsula. Due to religious and environmental concerns, the canal dredging was suspended at intervals and been revived due to political interests. At present, the project’s nature has evolved to a geopolitical and security concern of Chinese influence in India’s southern shores. A senior leader of the DMK, Lok Sabha member T.R. Baalu, has written to Prime Minister Narendra Modi to revive the Sethusamudram Project, citing a security and geopolitical interest concerning China. The Tamilian politician from South India says “The government needs to protect the southern part of the country against China, citing China’s huge investment in Sri Lanka. Revive Sethu Samudram Project.” Mr Baalu argues that there is a direct threat from Chinese presence in Sri Lanka and, requested the central government to prioritise this emerging threat to protect the southern part of India. While the Indian subcontinent has already faced a security threat recently in the northern border with China, now its focus is drawn to protecting the southern shores.

The Tamil Nadu political influence has been a distinct factor in the northern geography throughout Sri Lanka’s history. The strong influence of Tamil Nadu on Colombo and New Delhi is usually centric on the Tamilian grievances and not on China. The growing Chinese infrastructure diplomacy in the island has transformed into a South Indian security threat. This sort of reaction by the DMK member could hinder ongoing Indo-Lanka bilateral security cooperation. It has usually been the southern shores of Tamil Nadu that have exported considerable threat to Sri Lanka. From the 2019 Easter Sunday bombers that had direct contact with a South Indian extremist cluster revealed by the authorities, to the narcotics trafficking and illegal fisheries are continuous security threats for the island.

In the domestic political arena, discussing the importance of the Chinese built and operated southern port of Sri Lanka in Hambantota at a recent interview, Prime Minister Mahinda Rajapaksa’s son Namal, who is contesting from his father’s previous electorate explained: “Hambantota will become the next commercial city in the island with highways, strategic port, international airport and all the logistics ready, we will make this happen”. Namal Rajapaksa’s long-term view is to continue where his father has left off, converting Hambantota into a modern city under his leadership, perceived as a difficult and unachievable task by many in Colombo.  When looking at the massive Chinese infrastructure diplomacy carried out with two global connection hubs, Hambantota port and Mattala airport with other ancillary infrastructure including an international convention center, cricket stadium, highways, hotels and much more to come, this strategy of a next commercial city in the deep south perhaps could be achieved with the Rajapaksa leadership. The years of discourse of the political-economic history of the nation led to shift the western province dominated economic gravity towards the outer regions. Namal Rajapaksa has taken this challenging task in his tenth year of political office. The political history of Sri Lanka is such that even the first Prime Minister D.S. Senanayake left his political legacy to his son Dudley Senanayake to continue at the age of 41 years in 1952. While the context is different, the patterns could continue in the Sri Lankan political culture.

Strategic alignments to the Quad

In the larger ocean space, the US is moving more of its military assets towards the Indo-Pacific. USS Nimitz, the largest of its carrier warships arrived in the Indian Ocean for a passing exercise (PASSEX) with the Indian Navy off the coast of Andaman and Nicobar Islands during this month. Together with USS Nimitz, there will be two other US aircraft carrier groups in the region, USS Theodore Roosevelt and USS Ronald Regan, to counter the Peoples Liberation Army Navy (PLAN). There is a triangular power projection in the Indian Ocean from US, India and China which is more prone to conflict as the US allies formulate NATO-like military alignments to contain China.

In a recent interview, Indian Minister of External Affairs Dr. S Jaishankar explained ‘the rise of China has impacted the entire world, more than other nation it has impacted its neighbour India. China’s significant growth is felt and understood by India’. The trilateral Malabar naval exercise could expand to a quadrilateral, bringing the Australian Navy along with India, US and Japan for the first time. This would push India towards a security tension with China as it is already negotiating its northern border dispute with China. India, at the same time will bring Australia to engage in a wider containment strategy in the Indian Ocean. The quadrilateral exercise will be seen by China as a thinly disguised strategy of containment. The consequence was rightly assessed by analyst Abhijit Singh, who said: “India should be cautious to such quadrilateral engagement without a cost-benefit exercise and commensurate gains in the strategic-operational realm. Further this exercise could be ineffective in the long term”.

The tense Indo-Pacific region provides a possible casus belli if containment of China intensifies. China may employ its newfound muscle to forcefully impose its will to resist even modest aggression in the region by the US.  After four decades, there is a recent downward spiral in the relationship between US and China, escalating even to close down the Chinese consulate in Houston. The US, for its part will not abandon its allies opposed to Chinese expansion in the Indo-Pacific. According to Chinese Foreign Minister Wang Yi in a recent statement, “unilateralism and bullying are forcing their way in the world. An international disorder is more possible than ever.” While the forces for contention remain, as explained by Minister Wang Yi, it is still important to explore possible strategic space to minimize the tension.

China is already in the Indian Ocean, which is far from their traditional ocean space. India has looked beyond Aden and Malacca choke points and has begun to make naval forays into the Pacific Ocean, rightly assessed by C. Raja Mohan in his book Samudra Manthan (Churning of the Ocean). For the objective of maritime strategic expansion, it requires allies and littorals that are strategically located. Several scholars argue that Sri Lanka was mapped by Beijing’s strategic circle to facilitate the Chinese expansion in the Indian Ocean. In the same way, India joins with Australia and Japan as its close maritime partners to expand its presence in the Pacific Ocean. Military logistics agreements and military exercises are initial steps to cement these strategic alignments.

US Agreements, ECT and Mattala Airport

In Sri Lanka, there are two important agreements with the US, the Status of Forces Agreement (SOFA) and the Millennium Challenge Cooperation Compact (MCC) grant held up at the policy table. President Gotabaya Rajapaksa’s expert panel who reviewed the MCC agreement released its outcome to the public on 25 June at the height of the Parliamentary election. The review committee headed by Dr. L. Gunaruwan has drawn the attention of the President towards examples of many other nations that implemented the MCC had turned to worse whilst proceeding with it. According to Dr. Gunaruwan, the report was compiled professionally and independently. On page 10, the committee observed that a holistic analysis was not produced on the MCC by any authority in the past further stating on a footnote, although the Institute of National Security Studies (INSS) under the Ministry of Defence has submitted a report of observations in 2019 that was not made officially available to the committee. This was unfortunate and questions were asked as to why it was not made available. The US agreements will be on hold for some time due to domestic nationalist political constraints. In another development, the Indian led tripartite memorandum with Japan and Sri Lanka governments, to develop Colombo Port’s Eastern Container Terminal (ECT) is under review, and the Chinese built international airport in Mattala, a proposed joint venture with India during the previous regime is held up. The new developments could misconstrue as a pro-China position taken by government drifting away from Sri Lanka’s balanced foreign policy. Amidst the radical alteration of the maritime environment of Samudra Manthan by triangular powers US, India and China in the Indo-Pacific, the collective domestic developments in Sri Lanka could signal the return of Chinese influence with a much stronger footprint in the new Gotabaya Rajapaksa regime.