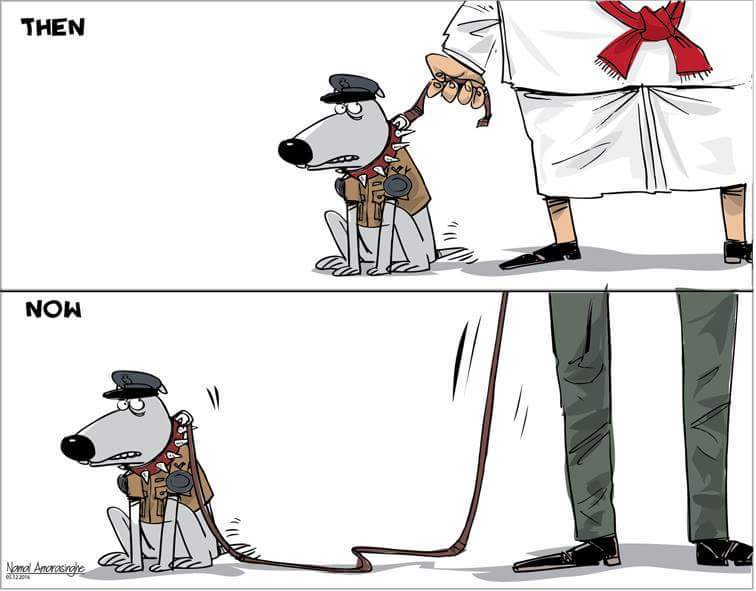 The difference, Cartoon by Namal Amarasingh.

ECONOMYNEXT – Intellectuals who propelled President Maithripala Sirisena to power has stepped up a campaign against his “unity government” accusing it of going back on “good governance” pledges two years ago.

Professor Sarath Wijesuriya, a key figure behind Sirisena’s success at the January 2015 election, issued a charge sheet against his government and accused it of protecting corrupt politicians of the former regime.

Wijesuriya who heads a civil society organisation founded by the late monk Maduluwawe Sobitha, said it was clear to them that members of the current government were protecting politicians of the former regime.

He said the highly publicised telephone conversation between Law and Order Minister Sagala Ratnayaka and police chief Pujith Jayasundara recently demonstrated the extent to which the law was being subverted.

“It was revealed to the entire world that the government is undermining the criminal justice system. It is not enforcing the law fairly and it is protecting cronies. We condemn it.

“Minister Sagala Ratnayaka has seriously undermined the people’s faith in the rule of law. The president must take immediate action against this,” he said.

He also listed the failure of Prime Minister Ranil Wickremesinghe to take action against those responsible for the massacre of 27 prisoners at the Welikada jail in November 2012 during Mahinda Rajapaksa’s regime.

It is understood that senior members of the police and the defence ministry are implicated in a cold blooded execution of prisoners, including three inmates who were key witnesses in a murder linked a theft of treasures from a temple.

By killing the three inmates, the eye witnesses to th case were eliminated and thereby clearing those who were behind a spate of robberies, including the theft of swords from the national museum.

While good governance activists step up pressure on President Sirisena, there was fireworks at Tuesday’s cabinet meeting, according to official sources.

Minister Sagala Ratnayaka was the subject of anger with at least two ministers using unprintable words to slam their cabinet colleague.

President Sirisena has been asked to take decisive action against Ratnayaka, but that would mean a head on confrontation with Prime Minister Wickremesinghe who is seen as the guardian angel of the Law and Order minister.

Wickremesinghe has already objected to the Constitutional Council examining the controversial telephone call between Ratnayaka and IGP Jayasundara.