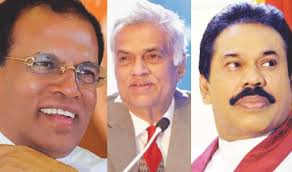 One fascinating dimension of the current political developments in Sri Lanka is the maturing power struggle between three groups of the Sinhalese political class. They are led by three prominent political personalities, President Maithripala Sirisena, Prime Minister Ranil Wickremesinghe and ex-President Mahinda Rajapaksa.

The last local government election, held a few weeks ago, marked the first occasion presented to these three groups to compete with each other in the public arena for popular support. The post-election days saw the intensification of their contradictions. Developments around the no-confidence motion against the Prime Minister, proposed by the Joint Opposition in Parliament, will be crucial to understand the emerging trajectories of this three-cornered power struggle. The forthcoming provincial, presidential, and parliamentary elections beginning the end of next year, might lead to some sort of resolution of it. We still cannot speculate its shape and consequences. Nevertheless, Sri Lankan politics is obviously heading for some interesting times.

This essay seeks to shed some light on the sociology and political economy of this intra-elite power struggle currently unfolding in the country. Before that, some preliminaries are in order.

Factions of the  intra-elite power struggle

First of all, there is no unified ‘ruling class’ as such in Sri Lanka, as many, even intellectuals, appear to believe. Instead, what we have is fractured, or fragmented groupings of a ruling class that constantly compete with each other while making occasional alliances as well. Electoral democracy has also enabled these groupings to organize themselves politically and bid for state power on a competitive and adversarial basis.

Factions of the ruling classes can also be described as political or ruling class elite groups. In Sri Lanka, they are ethnically fragmented along Sinhalese, Tamil and Muslim group identities and interests. This is the second important characteristic of Sri Lanka’s ruling class groupings. This ethnic fragmentation of the political elites is a reflection of their economic competition and rivalries organized along ethnic group interests since the mid 19th century. Thus, the relationship among ethnically identified ruling class groupings is primarily structured around their economic and political antagonisms. However, it is also a relationship that accommodates inter-group political alliances.

Thirdly, there are two dominant ruling groupings in Sinhalese society that are politically organized around the United National Party (UNP) and the Sri Lanka Freedom Party (SLFP). They originally came from two similar, not different as some claim, strata of the Sinhalese elite with competing claims to political power. Family rivalries among those who led these two parties and the intense competition for the loyalty of the rural, peasant electorate sustained their social and political antagonisms. However, their close relationship with Sri Lankan business groups, irrespective of their ethnic origins, has fostered their intra-class linkages. In fact, the dependence of leading families of the UNP and SLFP on the Sri Lankan capitalist class factions, across their ethnic group identities, is the main reason why one can make the argument that Sri Lanka’s dominant political and economic classes have had identical ‘class interests.’

Fourthly, in both, Sinhalese and Tamil societies, challenges to the dominance of established social and political elites from non-elite social classes have failed. The stories of failed LTTE rebellion in the North and East and the JVP rebellion in the Sinhalese South are also stories of the re-affirmation of the dominant, and upper caste as well as upper class elites in controlling Sri Lanka’s state. This dimension has a greater salience in Sinhalese society, because its two dominant elite/ruling groups have successfully obliterated any room for a third elite group to join the competition for political power.

The last point we just mentioned is the one that enables us to unravel the hidden social dimensions of Sri Lanka’s evolving power struggle at the top. A closer look at President Sirisena’s new political project, as it has so far unfolded during the past few months, is useful for us to make the connection.

Briefly stated, after the presidential election of January 2015, the SLFP developed a debilitating internal crisis, with President Sirisena becoming its new leader and the Rajapaksa family opposing him. President Sirisena became the SLFP leader not out of choice, but because it was thrust upon him. The SLFP’s party constitution dictates that whoever becomes the country’s President will automatically become the party leader as well. It led to an informal split of the party. Some of its leading members left the Rajapaksa camp and joined President Sirisena’s UNP-led government and his cabinet, as SLFPers, since President Sirisena was the official SLFP leader. Thus, the new government after 2015 became an unusual coalition of two leading rival parties, the UNP and the SLFP.

This created a unique anomaly in Sri Lanka’s politics, as it is becoming clearer only now, with some drastic consequences for the country’s political party system, dynamics of coalition politics as well as the composition of the political elites. A possible split of the SLFP, with two powerful rival camps, would have led to an alteration of Sri Lanka’s dominant two-party system. The formation of Sri Lanka Podujana Peramuna (SLPP) and its surprisingly good showing at the recently held local government elections, show that Sri Lanka’s party system is in for some significant change. Its contours are yet to be crystallized. However, the question that is posed in this context is whether there is political room for a third camp of political elites in Sinhalese society.

No unity in in any ideological or programmatic sense

President Sirisena’s acceptance of the SLFP leadership and his ability to persuade a good number of SLFPers to join him in the new government, initially appeared to be good news for the coalition government jointly led by President Sirisena and Prime Minister Wickremesinghe. But after less than a year, it appeared that this only weakened the coalition government. Although the coalition’s political base was expanded and the voting strength in Parliament strengthened, it actually developed internal fissures that soon became unbridgeable. The two leaders called the new coalition a ‘unity government’, but failed to cement the unity in any ideological or programmatic sense.

To make matters worse, those who joined President Sirisena and became even Cabinet Ministers began to oppose quite openly the UNP branch of the coalition government. They even advocated the old position that the UNP had always been the SLFP’s enemy. Their strategy, which President Sirisena seems to have initially tolerated and subsequently endorsed, was to renew the traditional rivalry between the two parties and in turn re-position the SLFP under President Sirisena as the legitimate heir to the traditional SLFP politics that was defined primarily in opposition to the UNP. Prime Minister Wickremesinghe reciprocated this rift and even deepened it by allegedly trying to exploit for the UNP’s electoral benefit the Sirisena-Rajapaksa rivalry within the SLFP. Thus, ironically, President Sirisena becoming the leader of SLFP contributed to the weakening of the coalition regime to which he gave joint leadership with Prime Minister Wickremesinghe.

Now this is the appropriate moment for us to return to our main theme. The UNP-SLFP adversity within the coalition government on the one hand, and the split of the SLFP into two rival camps, one led by President Sirisena and the other by former President Rajapaksa, have redrawn the battle lines of Sri Lanka’s elite competition.

The two-cornered battle quite unexpectedly became a three-cornered one, each led by a very ambitious political leader. Now, the question of the question, as we mentioned earlier, is: Is there room for a third political elite group in Sinhalese society? A related, no less important, question is: will the two dominant political elite groups in Sinhalese society allow a third player to succeed?

The tactics which President Sirisena seems to have been employing for the past few weeks indicate that he is not unaware of this challenge. If the stories about his attempts to bring Gotabhaya Rajapaksa to his fold are accurate, this very clearly suggests that President Sirisena is attempting a tactic of politically splitting the Rajapaksa family. At the same time, there is hardly any possibility of the other two Rajapaksas – Mahinda and Basil – joining hands with Sirisena to fight the latter’s battle with the UNP. They will only tactically respond to President Sirisena’s tactics.

[alert type=”success or warning or info or danger”]It is very difficult to expect the two Rajapaksa brothers to forgive President Sirisena despite the saying that there are no permanent enemies in politics.[/alert]

The Rajapaksas view themselves as a ruling family – there are only a handful of them in the whole country — and they are unlikely to forgive anybody who has humiliated members of their powerful family. That is probably a lesson they have learned from Sirimavo Bandaranaike and J. R. Jayewardene. It is no secret that Prime Minister Wickremesinghe has tried to prevent the personal humiliation of Rajapaksa family members. President Sirisena, by his own admission, has now extended this kindness to Gotabhaya Rajapaksa and we have to wait a little to see its political dividends.

President Sirisena is the new kid in the bloc

In the emerging intra-elite competition, President Sirisena is the new kid in the bloc, so to speak.

Compared with the other two –Wickremesinghe and Rajapaksa – President Sirisena has only limited resources. He does not have close family, social or class links with the Colombo social or economic elites. He is still a rural outsider, a shy villager not used to the trappings of class power. Mahinda Rajapkasa too initially had this disadvantage. He, within a few years in power, overcame all of his class, social, and family disadvantages by establishing very close links with Colombo’s business, industrial, and financial elites through an elaborate network of patron-client benefits. In this, he easily outclassed his Colombo rival, Ranil Wickremesinghe.

It is no small irony that the new economic and social elites, who emerged after the economic liberalization which the UNP initiated in 1977, love Mahinda and his SLFP and — one must be careful to use a neutral word here — dislike Ranil and his UNP.

That also tells us a lot about the kind of capitalism that has evolved in Sri Lanka after 1977. A discussion of that theme requires another essay.

Meanwhile, President Sirisena’s links with Colombo’s economic elites are both weak and tenuous. There is no doubt that the business groups look at his renewed campaign against corruption with a great deal of consternation, because it goes against the grain of both politics and economics of private-public partnership in the age of economic liberalization.

The private sector’s attitude to corruption and governance is not guided by moral principles either. Both Rajapaksa and Wickremesinghe know it well. This is where President Sirisena would be perceived as an outsider by Colombo’s powerful business elites. In brief, in the current power struggle among the three political elite groups, odds do not necessarily seem to favour President Sirisena.

But who knows, Sri Lanka’s politics has always had a strong element of surprise and unpredictability.