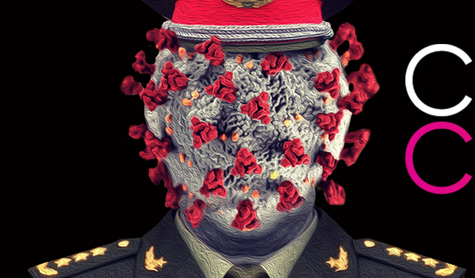 The anti-democracy virus infecting law enforcement officials in Sri Lanka today appears to have proceeded belligerently to the point that an attorney-at-law was arrested this week in circumstances so outrageous that it has drawn the Bar Association of Sri Lanka (BASL) out of hibernation to express its ‘concern.’

Pointing out in wary tones that reasons for the arrest of this attorney of Muslim ethnicity, who is no stranger to Hulfsdorp’s legal circles, has not been made known up to now, the Bar has observed that his arrest appears to be based on ‘certain functions’ attended to by him ‘in his professional capacity as a member of the Bar.’ As other reports indicate and to all intents and purposes, this lawyer had advised his clients implicated in cases connected to last year’s Easter Sunday attacks by ‘home grown jihadists,’ had been speaking out in regard to the racial profiling of Muslims in Sri Lanka’s anti-covid drive and had been a strong advocate of exposing racial discrimination. But as to how and in what circumstances, these actions taken individually or indeed collectively, violated the law remains a singular puzzle.

While this sequence of events remains to be clarified in due course, what makes this ‘curioser and curioser’ is that the habeas corpus application filed by his father days after the arrest details that the first intimation to him and the members of his family by state officers that their home would be paid a visit, was by officials of the Ministry of Health regarding tracing of covid-19 infections. However, it was not Health Ministry officials who arrived at his residence but officers of the Criminal Investigations Department (CID). If this version is to be believed absent an authoritative refutation, Sri Lanka has opened itself to joining the unsavoury grouping of states taking cover of the virus spread to tighten their authoritarian grip on their citizens.

What is worrying meanwhile is that this arrest comes in the context of the covid-19 panic taking on an unmistakably racist tone with both private and state media whipping up a frenzy in repeatedly telecasting images of only Muslim residents being quarantined. This is while ignoring the fact that the data on record did not reveal a shift towards any one racial group or another in the spread of infections. The hysteria got to be so bad that the Ministry of Health was forced to issue guidelines for reporters which stressed that demonizing covid victims on the basis of race must be abstained from. There is a hard truth as to why this should not occur, quite apart from the legal issue of discrimination.

The fact remains that stigmatization of victims only leads to others being afraid to seek treatment. As such, this is a formidable driver for the virus to infect more segments of the population. But regardless of this commonsensical caution, the Government Medical Officers Association (GMOA) released a so-called ‘exit strategy’ a few days ago which went so far as to divide the country into ‘Sterile, Contaminated and Buffer’ zones, bringing into the assessment applicable to the Colombo District, the factor of ‘the Muslim population.’ So why not the Sinhala or the Tamil populations, pray? Contrast this rabid racial profiling with the sober and clinically determined set of recommendations formulated by some of Sri Lanka’s senior medical specialists in advocating a well phased covid-19 exit strategy last week and one immediately sees the difference between top notch professionalism and crude populism. In this set of recommendations by the country’s specialists of repute, it is warned that racial profiling in the anti-covid drive will have disastrous effect.

Indeed, it is hard to decide whether the GMOA’s racial profiling is worse than the ludicrous spectacle of one of its leading lights advocating smoke as a method to beat off coronavirus. Sri Lanka’s medical professionals having a modicum of sense must be shuddering in their well polished shoes as it were. This nonsense is similar to medical fraudsters in Maharashtra advocating that consuming more garlic, curry leaves or cow’s urine will help combat covid-19 with the state Government having to refute these claims.

So the strategy, it seems, is to use the stick of racism and communalism even in the context of the most serious health emergency that Sri Lanka has faced in decades, to further a political agenda. Towards this end, a niftily cunning parlour trick was propagated by Sri Lanka’s state media and certain ruling Podujana Party (‘Pohottuwa’) politicians, including an erstwhile Professor of Law this week to say that because South Korea was able to hold its elections, Sri Lanka should also follow suit.

This dangerous reasoning is, of course, hollow at its core. It must be demolished in no uncertain terms. First, the exemplary manner in which South Korea held its elections was visible for the world to see. Masks, gloves were provided to all voters who were sanitized at the voting centres with temperatures being taken. Those with high temperatures enabled to vote in special booths. Elections staff were equipped in a manner similar to medical staff. Secondly and far more importantly, the decision to hold the election was after medical specialists and health experts assessed that the country’s virus infection rate was on a downward trend. Even so, strict vigilance is practiced to control the virus spread with huge resources directed towards this task.

Can Sri Lanka say the same? True, our public health sector has been doing a stellar job. It has not broken down in the face of a major health emergency despite the degradation wreaked by rapacious politicians. This is notwithstanding the Government allowing its obsession with holding parliamentary elections to delay a lockdown of high risk districts and failing to control entry at the airport of all arrivals, (not only a few selected countries), even as late as by mid March. Even a simpleton, and there are lamentably so many of them cocooned in the safety of echo chambers, should understand that this failure is not ‘just’ a thing of the past.

As a result, victims who arrived in the country one month ago but were not quarantined or tested but became diagnosed as positive when the virus manifested, were blamed for ‘hiding’ their symptoms though they were simply not aware. The warning that this virus could be asymptomatic in some individuals did not penetrate shuttered mentalities. Relatives of some who passed away due to the infection have written with great pain regarding the sitgmatization of the deceased. Suffice to say that all this may have been prevented if a solid quarantining and testing policy had been adopted at the outset.

In sum, will all the good done by the nation’s health sector specialists in containing the spread of the covid virus (despite a few bad eggs) be undone by politicians and their racist acolytes in law enforcement and media, feasting off the most intense human tragedies to fulfil political agendas?

This is the question that Sri Lankans must ask – and answer – as a nation.