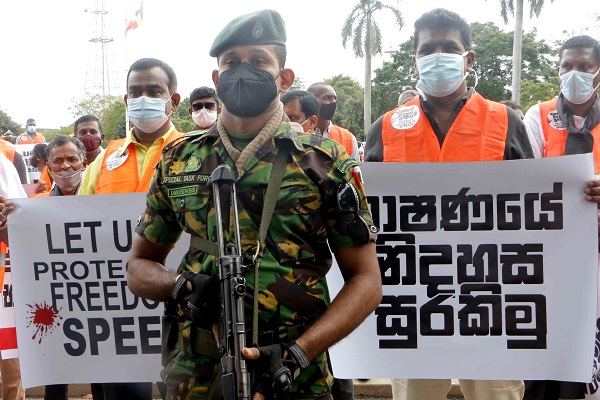 The freedom of association

Regarding the educational sector, the Federation of University Teachers’ Associations (FUTA) – the professional organisation representing a vast majority of state sector university academics in Sri Lanka – writing a letter to several United Nations Rapporteurs, stated that they would like to bring to their urgent attention a pattern of intimidation and harassment of a wide cross section of education sector activists in the country.

“We have strong evidence that suggests that this intimidation is tacitly and explicitly endorsed at the highest level of governance in the country. The police force of the country is being manipulated to systematically exploit regulations pertaining to public health and public property to stifle the legitimate democratic rights of citizens, trade unions, and civil society organisations to express their dissent regarding the mismanagement of the entire education sector of the country,” FUTA had stated.

“A broad range of education sector stakeholders and their supporters have been protesting for over three months regarding the long-standing salary anomalies and the professional dignity of teachers and principals and the proposed Kotelawala National Defence University (KNDU) Bill, which, if enacted, threatens to fundamentally alter the higher education and university system in this country, particularly by militarising civilian higher education institutions.”

Student unions were also attacked continuously with arrests, detention, and the fabrication of charges. These detentions exposed the student leaders to become infected with Covid-19. The teachers’ unions who have been engaged in a long struggle to resolve anomalies regarding the salary structures also came under severe reprisals.

The freedom of assembly

Five university student unionists were arrested for participation in the major protests held on 3 August 2021. They have been denied bail, using provisions of the Offences Against Public Property Act, which says that bail can only be given in exceptional circumstances if the alleged offence is damage to public property which is estimated to be above Rs. 25,000 (approximately $ 125; the price is based on a 1999 Amendment to the Act). In a letter addressed to the Magistrate on 4 August, the Police had claimed damages of Rs. 213,633.42 to police barricades and roads due to the burning of a mock coffin made of cardboard. This seems an exaggerated amount, calculated overnight, and aimed at denying bail for the suspects. The fabrication of charges in order to prevent bail being granted is a common practice in Sri Lanka.

While in detention, three of the students have become infected with Covid-19. In a letter to several United Nations Rapporteurs, the Inter-University Students’ Union has described this situation. Chameera, Amila, and Wasantha were arrested on 3, 5, and 6 August, respectively, and taken to the Colombo Remand Prison. They were subjected to rapid antigen tests (RATs) and polymerase chain reaction (PCR) tests and all had tested negative. Around 9 August, the trio were taken to the Taldena Quarantine Centre in the Badulla District, about 210 kilometres from the place they were initially remanded. This centre had the capacity to host about 80, but had about 170 persons quarantined.

On 22 August, PCR tests were conducted on about 120 of those quarantined and about eight had tested positive.

Amongst those tested and who turned out to be positive were Chameera, Amila, and Wasantha. This clearly indicates that they had acquired Covid-19 during the time that they had been remanded, and that the authorities in whose custody they were in, had failed to protect them from Covid-19, despite them being prohibited from interacting with anyone outside. On 28 August, there was news that they were to be taken to a quarantine centre in Iyakachchi, in the Kilinochchi District, about 330 kilometres from Taldena and subsequently, there was news that they were to be brought back to Colombo, about 350 kilometres.

These students have also been denied access to family and lawyers.

The freedom of expression

Every form of criticism of the Government is reacted to with harshness and often a system of reprisals has now been put in place. In the recent weeks, several persons were brought before the Criminal Investigations Department (CID) for questioning about various statements they had published either in the print media or in social media such as Facebook. They are not questioned on the basis of any alleged commission of a crime. Prolonged interrogation is being used as a means of intimidating critics who reveal critical information. This method is also used to intimidate others from expressing their dissent. This is taking place in an environment in which the economic conditions have deteriorated worse than ever in terms of the depletion of the US dollar in the national Treasury which has created serious problems of paying back foreign debts.

The manner in which this situation is dealt with is to impose more and more restrictions on the increase of the prices of goods either by way of printing new money, thereby causing the deterioration of the Sri Lankan rupee, or by enforcing indirect taxes on basic consumable goods. These measures have reduced the purchasing power particularly of the lower-income groups which consists of more than 60% of the population.

Persons who have been called by the CID for questioning on their public statements were Dr. Jayaruwan Bandara and a university student who was arrested and subsequently detained for over a week for allegedly spreading a rumour that special quarantine centres have been built for very important persons (VIPs). Dr. Bandara, a former Spokesman for the Health Ministry, made a television interview on the high prices of the Covid-19 tests and the general handling of the pandemic. He had been called by the CID for questioning. Dr. Najith Indika was also questioned by the CID for posting critical remarks on Facebook about the crisis of a hospital due to the increasing number of Covid-19 patients. The Police used the provisions in the Computer Crimes Act, the Police Ordinance, and the Penal Code for the suppression of opinions critical of the Government.

Shehan Malaka, a young Catholic activist, who had participated in the campaign led by the Catholic Church demanding justice for the Easter Sunday massacre in 2019 was called by the CID for questioning about his views on the failure to guarantee justice to the victims of the crime. He was questioned continuously for eight days for about eight hours each day by a group of CID officers about his knowledge about the matters that he has spoken about. His arrest was condemned by the Catholic Church as well as many people from the independent media.

On the same issue, earlier, Opposition Member of Parliament (MP) Harin Fernando was also called upon for interrogation by the CID for a statement he had made in the Parliament regarding the failure to conduct proper investigations into the Easter Sunday massacre. He had to seek medical refuge in order to avoid being arrested for questioning on the factual basis of the statements he had made in the Parliament.

Further controversy was created by the Government’s Spokesman who attacked Archbishop of Colombo His Eminence Malcolm Cardinal Ranjith, who had spoken openly, stating that justice has been denied to the victims of this crime in Sri Lanka and that therefore, there is no option but to refer the matter to the international community. He further stated that all information relating to this crime and the failure to ensure justice has also been reported to Pope Francis as the Head of the Catholic Church and also to others. This provoked reactions from the Foreign Affairs Minister as well as the Inspector General of Police’s criticisms of the Government.