‘Sri Lanka’s Prevention of Terrorism Act should be repealed’ 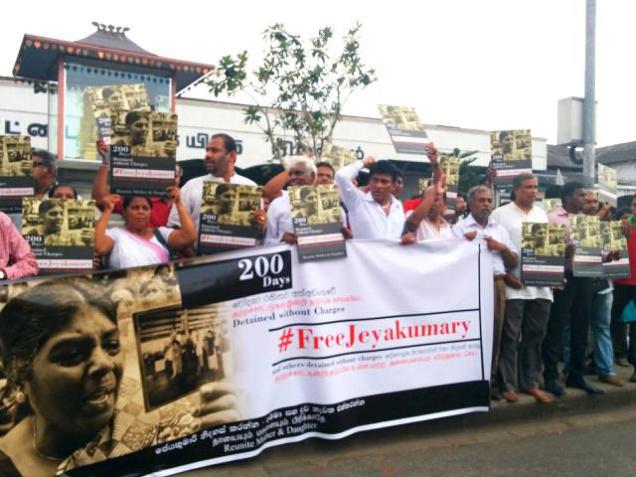 Civil society members and politicians came together at a campaign in Colombo, seeking the release of Balendran Jeyakumari, who was arrested by Sri Lanka’s Terrorism Investigation Division (TID) in March this year. They demanded that the Prevention of Terrorism Act (PTA) — under which Ms. Jeyakumari was detained — be repealed immediately.

It has been nearly 200 days since the TID arrested Ms. Jeyakumari in Kilinochchi, along with her teenaged daughter.  She was at the forefront in campaigns against involuntary disappearances, raising concern about her son who reportedly went missing in the final phase of the war. While the daughter is in probationary custody in a children’s home, Ms. Jeyakumari continues to be detained with no charges filed till date. At least 80 persons have been arrested under the PTA Act in Sri Lanka this year.

Sri Lankan authorities have maintained that she harboured Selvanayagam Kajeepan alias Gobi, who allegedly tried reviving a network of the rebel Tigers. Gobi was also one of the three suspects that the Sri Lankan armed forces shot dead in April 2014 when they “attempted to escape”, according to the country’s army officials.

In what seemed like a counter campaign on Monday, a small group of persons identifying themselves as members of the ‘Patriotic National Movement’ gathered at the venue, outside Colombo’s Fort Railway station, holding posters that said Ms. Jeyakumari was a supporter of the LTTE and had to be detained.

They shouted slogans against her release, as participants of the “Free Jeyakumari” campaign — which had activists and some politicians — raised concern over the prolonged detention of Ms. Jeyakumari with no conclusive evidence to charge her.

“The anti-terrorist legislation in this country is draconian, serving no purpose. If this lady is guilty, if there is evidence to charge her, why don’t they do so?” asked Paikiasothy Saravanamuttu, executive director of the Centre for Policy Alternatives, a nonprofit think tank based in Colombo. He said it was “absolutely scandalous” that people were held in detention without bringing them to court and letting the wheels of justice turn. “It goes against everything that we understand to be reconciliation, national unity.”

Senior lawyer and Tamil National Alliance (TNA) parliamentarian M.A. Sumanthiran said the PTA was a temporary provisions act introduced in 1978. “It is still in existence five years after the end of the war, which the government claims was against terrorism. We demand that it be repealed immediately,” he said, adding that it was the existence of such an act that made the detention of Ms. Jeyakumari and several others without charges possible.

Gajendrakumar Ponnambalam  of the Tamil National People’s Front (TNPF) said given that the issue of allegedly enforced disappearances had become a key issue in the ongoing international probe into Sri Lanka’s rights record, the government detained Ms. Jeyakumari for it feared she would testify at hearings in that regard.

A presidential commission — set up by President Mahinda Rajapaksa — tasked with inquiring into complaints regarding missing persons has so far received nearly 20,000 petitions from families of missing persons.

Meera Srinivasan for The Hindu