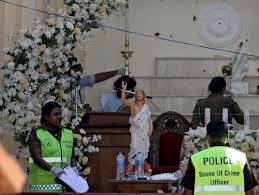 There were many chances to stop the Easter Sunday attacks. The government missed them all.

he horrific terrorist bombings in Sri Lanka on April 21 killed more than 300 people and injured 500 more. Sri Lankan officials have identified a little-known local group, National Thowheed Jamath (NTJ), as behind the coordinated Easter Sunday attacks, while the Islamic State has just claimedresponsibility.

There are questions surrounding exactly who sponsored this attack, but the real question is whether it could have been stopped. Although more evidence will emerge over time, the information trickling out paints a damning picture. The attacks were preventable, but compound failures let them happen. Sri Lankan authorities failed to anticipate the threat from Islamist groups with potential international networks, ignored warning signs, and failed to share information among themselves.

The bombings represent an intelligence failure of massive proportion. But a failure this big is not just confined to Sri Lanka. Jihadi terrorism is a global threat. When the networks are international, attacks in one country demand concerted action to prevent such mistakes from happening again.

At least two weeks ago, intelligence officials from India and the United States warned Sri Lankan officials about a potential plot against churches and tourist sites in the country. A week later, the Sri Lankan Defense Ministry advised the inspector general of police of the potential plot—complete with a list of namesand addresses of potential suspects, several of whom turned out to be the real attackers. Nothing was done.

Sri Lankan officials had also received previous warnings about NTJ from the Sri Lankan Muslim community. The vice president of the Muslim Council of Sri Lanka claimed that he warned military intelligence officials about the group as far back as three years ago.

Why did no one act on these advance warnings? Probably because the Sri Lankan government remains bitterly divided, with the president and prime minister at war with each other.

Sri Lanka is still feeling the reverberations of the constitutional crisis last year, where the president (and defense minister), Maithripala Sirisena, attempted to remove Prime Minister Ranil Wickremesinghe from office and replace him with the authoritarian former leader Mahinda Rajapaksa.

Although this political coup failed, the division between president and prime minister continues, and control of the security services has been a key potential battleground. In an environment where information has become a political tool, and where Sirisena has taken the defense and police ministries under his own control and excluded the prime minister from the national security council, it’s hardly surprising that lower-level officials were reluctant to take action unilaterally.

Nevertheless, the various national security officials who were aware of the threat should have acted. And at least two other ministers—Telecommunications Minister Harin Fernando and Minister for National Integration Mano Ganesan—also said they had advanced warning. In a divided government, everything becomes somebody else’s problem.