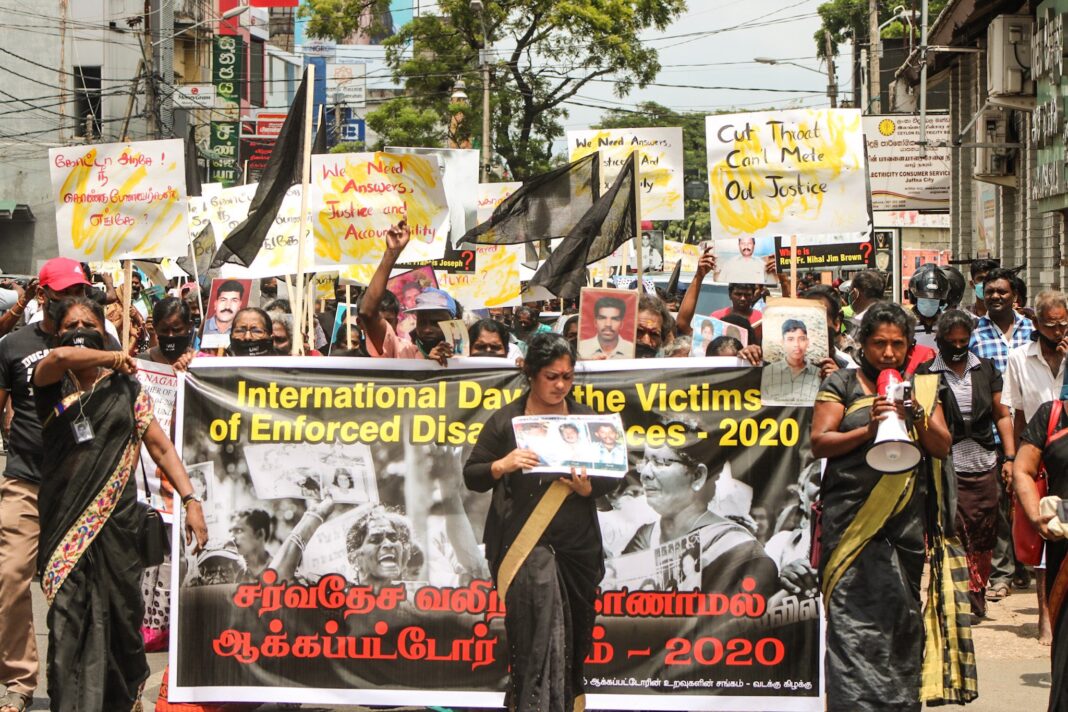 Image courtesy of The Tamil Guardian.

One of the issues that demonstrated the approach of the Sri Lankan authorities to the problem of enforced disappearances could be discovered in a close study of the narrative of the Office on Missing Persons (OMP). In essence, what it shows is the international diplomacy of deception that Sri Lankan authorities have cleverly developed and practiced over a long period of time in dealing with the United Nations (UN) Human Rights High Commissioner’s Office and other UN agencies relating to human rights.

The diplomacy of the deception became quite blatantly manifest with the appointment of the new Commissioners to this Office very recently. Some of the names included will naturally create cynical laughter among anyone who know something about these individuals who have been appointed and their own involvements in the events relating to enforced disappearances and also in the diplomacy of deception, particularly in relation to matters relating to justice.

It is simply impossible for anyone to grasp the whole exercise relating to enforced disappearances in all parts of the country: South, North and East without touching on some of the most difficult problems relating to the administration of justice that has evolved over several decades in Sri Lanka.

Thus, in talking about disappearances in Sri Lanka, what we have is a situation where a policy of allowing enforced disappearances was pursued through national security laws and regulations.

The issue that the international community has found it difficult to deal with is the fact that enforced disappearances in Sri Lanka developed as a State policy. The greatest manifestation of this State policy is that the largest amount of cases of persons who had disappeared has faced that fate while they were in the custody of the security forces. Commissions on involuntary disappearances which is the only somewhat serious attempt to investigate into enforced disappearances have clearly recorded in their reports that disappearances in Sri Lanka means the abduction in place of arrests, and interrogations and torture while a person is in the Police custody and finally the causing of death and the disposal of the bodies of these persons by the security authorities. These were not accidental events for which only some errant officers were responsible.

The laws were made in order to enable enforced disappearances. The suspension of the laws relating to the disposal of bodies of suspicious deaths was done through gazette notifications which announced emergency regulations. An officer, not below the rank of an Assistant Superintendent of Police (ASP) was allowed to decide on the disposal of the body of a person without following any procedures or without subjecting themselves to judicial scrutiny. Thus, in talking about disappearances in Sri Lanka, what we have is a situation where a policy of allowing enforced disappearances was pursued through national security laws and regulations.

It is only a government that is willing to admit that wrong policies have been adopted and allowed in the past which were of a criminal nature and is willing now to reveal this fact to their own society and to make a genuine resolve in order to end this practice, could undertake a serious investigation into enforced disappearances.

The only time that things came closer towards accepting this responsibility, was during the early period of former President Chandrika Bandaranaike Kumaratunga’s Government which appointed Commissions on involuntary disappearances. The recordings were through a genuine process without overt obstructions from the Government at the time. That led to a body of information that if pursued further would have made a significant difference not only about the persons who have disappeared but also about the damage done to the legal system, particularly the criminal justice system in Sri Lanka. Due to various reasons, these Commissions reports did not lead to a healthy conclusion.

The OMP was created by the Government of former President Maithripala Sirisena and former Prime Minister Ranil Wickremesinghe, to create the impression that the Government is not at “war” with the UN human rights bodies. It was meant to reduce tensions and to buy time to allow a slow process of undermining the demand for compliance with the State obligations to investigate and prosecute those responsible for these violations. However, the Government knew that such investigations were very problematic, as the chain of command that led to such violations, extended beyond those who carried out the actual criminal acts.

While several commissions were keenly interested in carrying out there functions, the Government’s way to undermine their efforts was by delaying processes by creating technical difficulties in setting up a functioning office. It took a considerable time in getting the computers.

However, some dedicated work was done by the Commissioners, who received floods of applications from families in the North and the East. A lot of sweat was spent to collect the tearful tales and to find the credible facts and to record them.

Their real tasks will be the following:

Discredit the complaints and witnesses.

Destroy the evidences of facts that have been collected.

Erase the very idea of the right to seek justice for enforced disappearances.

It brings back the original policy that made disappearances possible: In Sri Lanka, it is a right of the State to cause disappearances when the State thinks it necessary to do so. Thus, what is asserted is that Sri Lanka has its own view on the killing of human beings. These may not be the same as what is found in the law, locally or internationally. In short, the policy is ‘We decide what crimes are and what is or not a crime’. It is this policy that will determine the fate of the OMP.