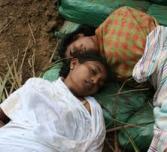 20 June 2011,
“In a grotesque perversion of humanity, the military had considered the mechanics of human grieving and come up with a novel way to kill tens of thousands: they would drop an initial shell on a village, usually killing those too old, weak or young to take shelter in time. Then they would wait ten minutes — until people had gathered around dead or dying loved ones, trying to save them, or weeping over them — and then shell for a second time; thus wiping out whole families in 11 minutes flat,” says Caitlin Moran, in UK’s The Time’s review of the Channel-4 “Sri Lanka’s Killing Fields,” widely believed to be “the most visceral war footage ever broadcast.”

Sri Lanka’s Killing Fields was presented by Snow — straight-backed, angry-eyed, but very clear about what it was going to show, and why. “This programme contains very disturbing images depicting death, injury, execution and evidence of sexual abuse and murder, much of it filmed on mobile phones,” he said with quiet firmness. “For the past two years, Channel 4 has been compiling its own dossier of war crimes; evidence for bringing the guilty to justice.”

That it was down to a commissioning editor at Horseferry Road to do this was the first shaming moment of Killing Fields, for the opening footage showed the UN in 2008, evacuating from Sri Lanka. The Government had reopened its attacks on the minority Tamil population, and told the UN that it could “no longer guarantee their safety”. With an obedience that blurred into complicity, the UN observers promptly packed and left, among scenes of Tamils gathered around their compound, weeping.

“We don’t care about shelter, food or water; we can take care of ourselves if you leave,” a local Brahmin begged, as a stricken UN worker filmed him on his mobile. “But if you leave, the truth is that everyone here will die. We have a knife to our throats.”

And he was right. Within three months of the UN leaving, the Sri Lankan Government was herding between 300,000 and 400,000 Tamils into a “safety zone” to the east of the island. With no international witnesses left, these, then, became the killing fields of the Killing Fields — not fields at all, but a beach, a sandy spit of land that must have featured in thousands of tourist photographs. In a grotesque perversion of humanity, the military had considered the mechanics of human grieving and come up with a novel way to kill tens of thousands: they would drop an initial shell on a village, usually killing those too old, weak or young to take shelter in time. Then they would wait ten minutes — until people had gathered around dead or dying loved ones, trying to save them, or weeping over them — and then shell for a second time; thus wiping out whole families in 11 minutes flat. Soon the Tamils learnt to leave half an hour after a shelling before coming out into the open — “In which time, many of those who could be saved would have bled to death, in the open, as their loved ones watched,” Snow noted.

This is a terrible, awful evolution for humans — not to go to your dead. To stay in the bunkers for a full half an hour, waiting for death to finally pass over.

For those who wanted to know what this evil might look like in practice, we saw mobile-phone footage of three girls in their teens, in bright dresses, standing together in a bomb shelter of corrugated iron. Ten feet away from them, in the open, were three adults and two children. You could practically see the ribbons that tied the hearts of the living to the hearts of the dead. But the girls were too afraid to go to them.

“The agony of not being able to leave the bunker is unbearable,” Snow said in voice-over: not opinion but a single, endlessly heavy fact. The girls were writhing and clutching at each other. They had to wait for the half-hour all-clear — but they could not run, and they could not stay. Stuck between two moments, all they could do was hold each other and scream — each scream carrying on where the previous one had left off; each scream as awful and unendurable as the last.

This is the kind of sadism that drives people mad. This is the kind of experience that drives whole countries mad. As a spokesman for Amnesty International explained — around the time you started asking yourself “Why am I watching this? I am just making myself anxious and useless” — “Unpunished war crimes leave wounds that return, and prevent societies from moving on.”

Of course, there are always wars across the world, calling out for international attention. If you took the Earth and marked the wars with splashes of red, the globe would look like it had a ferocious rash across its centre, like the after-effects of a cilice belt, recently removed. The awful, quiet fact is that it often takes a fresh, novel horror to make a conflict really come to your attention, to move from being background noise to a conflict that is one of “your” wars, a conflict you’re “keeping an eye on”.

And Killing Fields had that awful, novel thing, in the shape of the rape of the Tamil women. I have never seen footage like this before: dead women on the jungle floor, naked from neck to knee, like gifts torn open in the middle by greedy, evil children. The vulnerability of the hip bone and breast: women’s anatomy is hard to defend. And here, they had all been put to one last, awful use before they were shot in the head. Tens of them. Hundreds of them. This is how the women died.

As the mobile-phone camera — wielded by government soldiers — roamed across the jungle floor, we came across a sight more shocking than any other. At the beginning of the show we’d seen the famous Tamil newsreader Isaippriya Oliveechchu at her job, reading the news with the swanlike serenity of newsreaders across the world. Now we found her here, on the jungle floor, dead: blood across her face like bad jewels, breasts naked, trousers torn down to her thighs. As an emblem of Tamil culture, imagining what she would have been put through was revolting. The crowing. The spite.

Sri Lankan soldiers filmed themselves loading the bodies of the women on trucks.

“If no one else was around . . .” one soldier grinned, lasciviously, to the camera, prodding a dead woman with his boot.

Behind him, another pointed at a dead woman — perhaps 18 years old — being hauled into a truck by her ankles, and commented: “She has the best body today.”

So that was death unwelcome — death from above, blowing the ground out from under your feet; death evil. Death with its skull face, and its hand across your face, like a claw.

But what about when death is kind; when it speaks with a gentle voice? When death is the boat you wait for; a door in a burning corridor; the friend you long to arrive from a journey that has taken so, so long?
TN