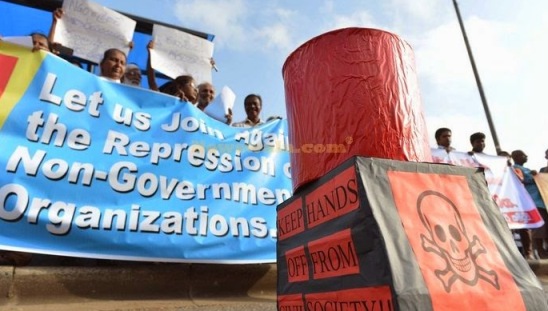 In a notice issued on July 1, the government of Sri Lanka announced that nongovernmental organizations (NGOs) would no longer be allowed to hold press conferences, conduct trainings for journalists, or issue press releases. The move has been sharply criticized by both leading activists within Sri Lanka and experienced international analysts. The U.S. State Department was also quick to criticize the move.

The administration of President Mahinda Rajapaksa didn’t stop there. All non-profit organizations in Sri Lanka will need to register officially (as NGOs) with the NGO Secretariat, a body that operates under the Ministry of Defense and Urban Development. If an organization refuses to do so, severe financial restrictions would be forthcoming, including the closing of bank accounts and a prohibition on receiving foreign funding. Another recent notice – this time issued by the Ministry of Finance and Planning – has emphasized that all NGOs should get its approval before receiving foreign funds.

This isn’t the first time that the Sri Lankan government has cracked down on NGOs. In May 2009 – right before the civil war ended – Rajapaksa created the Presidential Task Force for Resettlement, Development, and Security in the Northern Province (PTF). A historically Tamil area, the Northern Province was the site of the most intense fighting during the twenty-six-year civil war between the Sri Lankan government forces and the separatist Liberation Tigers of Tamil Eelam (LTTE). In practice, the PTF was empowered to monitor, question, and intervene in the activities of any NGO working in the north, including U.N. agencies.

Projects which focused on “hardware” and infrastructure-related interventions or the direct provision of basic services consistently received approval from the PTF. However, other vital initiatives – including those pertaining to psychosocial care, governance, human rights, research, and advocacy – were rarely approved. While PTF approval and reporting requirements simplified in recent years, they still represented a considerable bureaucratic burden on the already restricted time and resources of development organizations.

What’s more, implementing a project (or activities) in the north without the PTF’s stamp of approval always came with the risk of government intimidation, office visits, threats, heightened surveillance, or worse. The strong military presence throughout the north contributes to these challenges.

The government recently announced that the PTF has been abolished, and a new Bureau of Reconciliation will be created to fill the void. The effects of this move remain to be seen, however, the military’s consistent foray into civilian affairs – including development work – is bound to continue.

Sri Lanka continues to receive international criticism regarding war crimes allegations, which the regime refuses to address adequately. And it has long been suspected that the PTF itself was designed to prevent any information about those sensitive issues – including extrajudicial killings and the systematic shelling of hospitals – from being transmitted beyond the country’s borders. If the Sri Lankan government wields a tight grip on development interventions and their implementing organizations – especially matters pertaining to human rights and psychosocial care in the area where the fighting was at its most intense – then talking about what actually happened during the end of the war would be extremely difficult and even dangerous.

An “NGO bill” or the possibility of more restrictions for NGOs has been discussed for some time, and many Sri Lanka watchers have expected increased scrutiny on this front. The government’s intrusive surveillance of NGOs won’t be going away any time soon.

The U.N. Office of the High Commissioner for Human Rights (OHCHR) investigation into alleged war crimes – a key component of the most recent U.N. Human Rights Council resolution on Sri Lanka – has likely made a paranoid regime even more skittish. Right now, the government of Sri Lanka is trying to create as intimidating an environment as possible; ostensibly to discourage community members and civil society organizations from providing the investigation team with any information that might incriminate the government.

One can expect the Sri Lankan government to maintain intense pressure on NGOs for the foreseeable future, at least until March 2015 – when a report regarding war crimes in Sri Lanka is officially presented at the 28th session of the U.N. Human Rights Council in Geneva.

The shrinking space for NGOs can be viewed as a microcosm of broader trends on the island. Peoples’ freedom of movement and freedom of association are consistently curtailed, especially in the north. A restrictive media environment illustrates the fact that the freedom of expression is limited. The government’s unwillingness to promote human rights, reconciliation, or accountability has made a complex post-war environment even more unsustainable. And continued (and unnecessary) militarization has only made things worse. The regime’s recent crackdown on NGOs is another example of the government’s relentless effort to further centralize power and stifle dissent. From initiatives pertaining to livelihood, education, health, advocacy, and more, the void that many NGOs fill in Sri Lanka is irreplaceable. But in order for these groups to be fully effective, they need to be given space to do their work.

Implementing human rights and humanitarian projects in Sri Lanka was already tough. Nonetheless, for development practitioners and human rights activists working on the island, things have become even more difficult. Unfortunately, these recent moves are just one part of wide-ranging concerns that are unlikely to be allayed anytime soon.