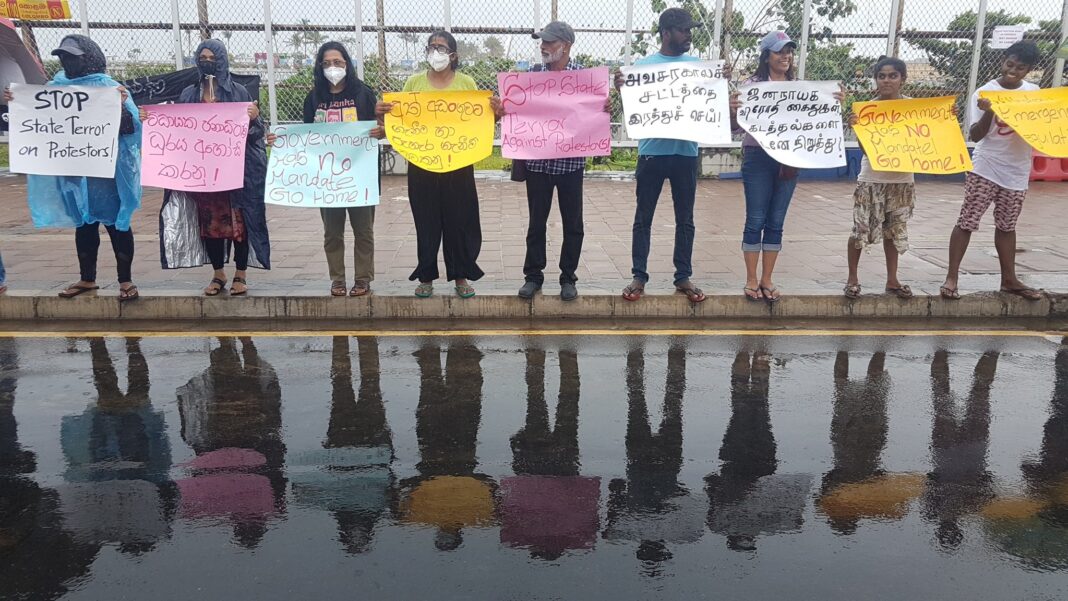 Analysis by The Editors | Bloomberg

(August 5, 2022) Sri Lanka’s new president, Ranil Wickremesinghe, will need all the help he can get to stave off an economic collapse. He should be striving to win over his many critics, not to suppress them.

The scale of the crisis confronting Wickremesinghe, a former six-time prime minister, is daunting. Sri Lanka is effectively broke. A series of misguided economic policies — many implemented during the presidencies of brothers Mahinda and Gotabaya Rajapaksa — have left the country with unsustainable debts and almost no means of paying: It has $7 billion in debts due this year and barely $2 billion in foreign-exchange reserves.

Imports of fuel and other essential goods have been severely restricted. Inflation is nearing 60%; food prices alone have risen 80%. Economic activity has ground to a halt and most Sri Lankans are cutting back on meals.

Months of demonstrations finally drove Gotabaya Rajapaksa from power in mid-July. Protesters accused the former president, who had packed his cabinet with family members and cronies, of corruption and incompetence. Many are equally suspicious of Wickremesinghe, who is thought to have protected the Rajapaksa family from legal scrutiny in the past. The new president did not help his case for independence by immediately ordering the military to clear the main protest site by force, then appointing a cabinet drawn largely from ruling-party politicians still loyal to the Rajapaksas. This week, Human Rights Watch accused security forces of using emergency regulations to harass and arbitrarily detain activists, lawyers and journalists.

Seeking to crush the opposition would be a deeply short-sighted strategy. The International Monetary Fund, which is finalizing the details of a desperately needed bailout with Sri Lanka, wants to see political stability and a government capable of keeping its promises. Those pledges will have to include painful budget cuts, tax hikes, the lifting of subsidies, and the privatization of state-owned firms. Even if Wickremesinghe is able to quell protests temporarily, they are almost certain to swell again once those reforms begin to bite.

Far better to prepare Sri Lankans for the sacrifices that will be required to emerge from this crisis. Several members of the opposition have, like the new president, long favored more liberal economic policies; Wickremesinghe should be seeking their input and giving them a stake in designing the necessary reforms. The government also needs to be more transparent about talks with the IMF, which have largely been conducted out of the public eye.

Most important, the new president needs to address the protesters’ legitimate demands for political reform. He has promised to roll back at least some of the sweeping powers Gotabaya Rajapaksa had assumed through a constitutional amendment and to restore more authority to parliament. He should make good on that pledge quickly, before the temptations of office weaken his resolve. He should also show he is serious about reining in corruption by supporting an independent anti-bribery commission, police units to investigate financial crimes, and international efforts to recover stolen assets.

Friends of Sri Lanka, including the US, the European Union and India, have worked with Wickremesinghe before and should not be shy about using their leverage with the new government. While they should provide more immediate relief to ease the suffering of ordinary Sri Lankans, they should also coordinate with the IMF to ensure that any long-term bailout plan is contingent on serious political as well as economic reforms. There’s little point in papering over this crisis only to hasten the next one.