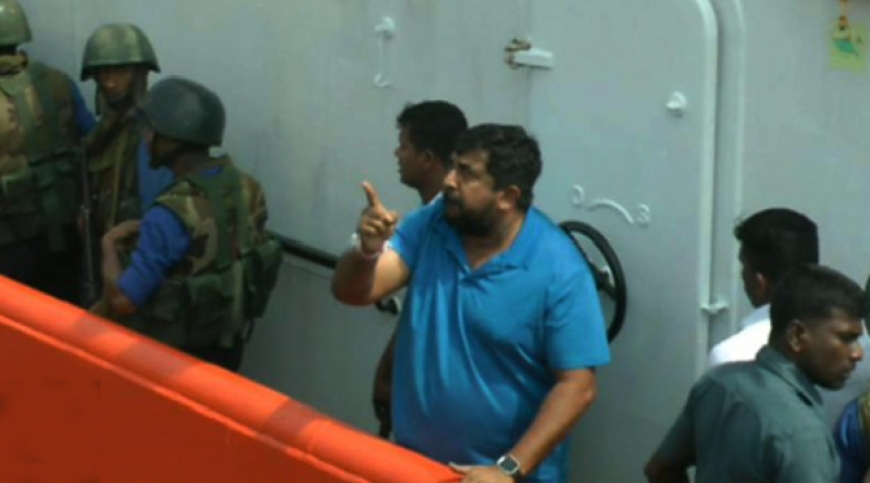 Sri Lanka’s navy chief Ravindra Wijegunaratne is in deep trouble after he was caught on camera assaulting a television journalist and abusing reporters in unprintable language, official sources said.

The Vice Admiral had personally led a navy boat team to lift a blockade of the Hambantota port on Saturday and free two foreign vessels that were virtually hijacked by dock workers.

Video footage of other journalists showed the navy commander darting towards a television cameraman, assaulting him and using foul language. The navy chief protected by a ring of heavily armed navy sailors break the cordon to assault a reporter despite being identified as such.

It is understood that the government has initiated an investigation into the unprecedented conduct. This is the first time that the head of an armed force in Sri Lanka is caught on camera assaulting a journalist.

Official sources said the vice admiral had already earned the displeasure of the authorities after he joined ranks with former air force chief Gagan Bulathsinhala in calling an unprecedented boycott of the eastern province chief minister in May this year.

The then air force chief Bulathsinhala was not given an extension despite his attempts to secure one through his personal friend and defence secretary Karunasena Hettiarachchi.

Official sources close to the president said Hettiarachchi also fell out of grace and was currently on borrowed time after he sided with Bulathsinhala and Wijegunaratne.

The political establishment saw the boycott of a chief minister called by service chief’s as setting a dangerous precedent and President Maithripala Sirisena immediately intervened to revoke the ban announced by Hettiarachchi. (COLOMBO, Dec 11, 2016)