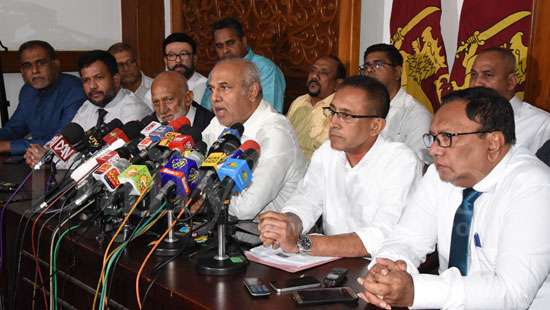 At least nine ministers and deputies will resign but will remain in the backbenches, they said.

“Muslims helped the military seek out the terrorists,” said Kabir Hashim, of the United National Party, whose secretary was shot by suspected Islamist extremists and is paralyzed.

“Some people are using this as a chance to fan racial hatred. In parliament, we may represent different communities but we work for the country.”

Sri Lanka has seen violence against Muslim businesses and harassment of particularly Muslim women who wear headscarves, after the burqa was banned in the wake of suicide bombings which killed over 250 persons on Easter Sunday.

Rauff Hakeem, from the Sri Lanka Muslim Congress said he was resigning to be a backbencher but will support the government.

Extreme Sinhalese elements have are using the internet and mainstream media to attack the Muslim community.

“The hate speech and hate culture and the culture of impunity which exists for some of them must come to an end.”

Members of Sri Lanka’s Muslim community has been radicalized partly through influence from Middle Eastern states.

A group mainly from Sri Lanka’s Eastern province where many Muslims live carried out the bombings.

Earlier in the day two provincial Governors, who were appointed by President Maithripala Sirisena resigned.

The resignations came as Athureliya Rathana, a monk-legilator form a Buddhist party fasted in the hill capital of Kandy calling for the resignation of the two governors and Industries Minister Rishard Bathiudeen.

Head of Sri Lanka’s Catholic Church, Cardinal Malcolm Ranjith, who had earlier called for calm also joined the protestors. Nationalists had also targeted Churches in the past.
(Colombo/June03/2019)