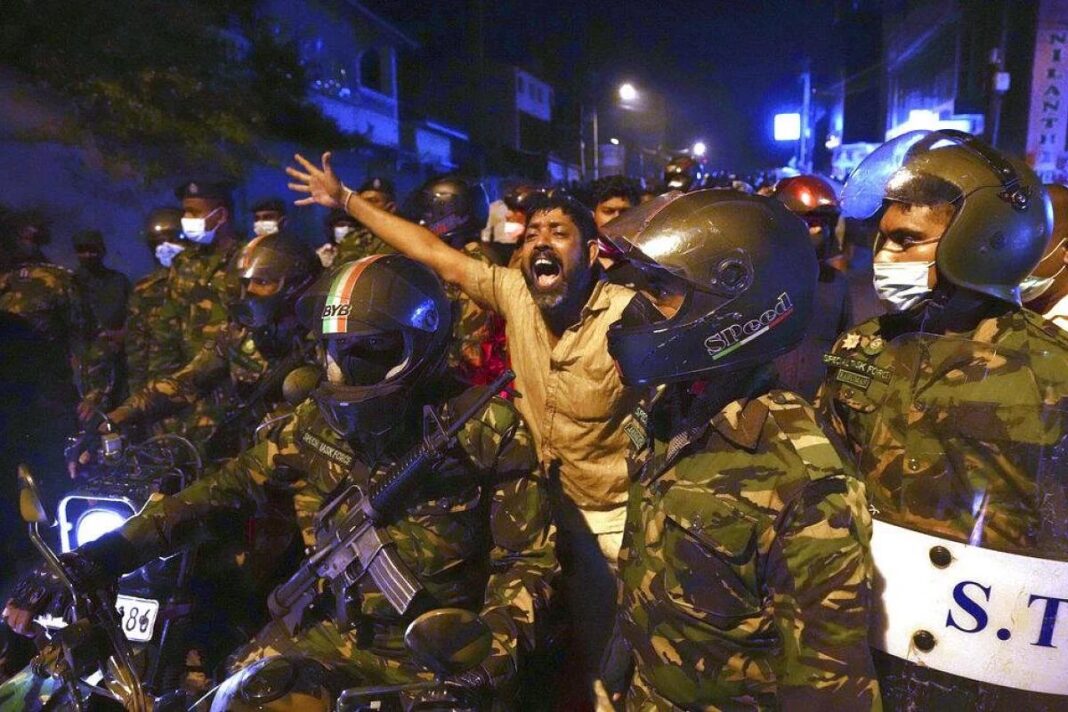 If the Sri Lanka Government prefers to delude itself into believing that widespread and unprecedentedly furious public protests against the President, the Prime Minister and the Government this week were instigated by agent provocateurs of the Opposition, that is its wish.

Contrary to that belief however, the truth is far more inconvenient. To put it a tad crudely, the Opposition, put together, cannot say boo to the proverbial goose. What the country experienced was not the feeble yapping of the Opposition but catastrophic peoples’ angst spilling over to the streets as citizens simply feared for their survival. Indeed, these explosions of public rage are meant for both the Government and the Opposition, the country’s corrupt political establishment in its entirety as it were. That fury was long in the making, the bitter fruits of a failed ‘yahapalanaya’ experiment (2015-2019) as well as collective terms of ruinous rule, the present one far surpassing its predecessors, let it be said bluntly.

But in failing to recognise this fact and in framing the protests through the lens of the (convenient) violence that occurred in Mirihana on Thursday night, the Government continued its catalogue of heedless mistakes. Ministerial persona classified the Mirihana protestors as ‘political extremists’, some Ministers even imprudently referred to them as ‘terrorists,’ later to speedily recall the unwise reference. True, a peaceful demonstration by residents asking for accountability from the Government on Thursday turned to the worse due to a ‘separate violent group,’ as per the police spokesperson who chose his words far more deliberately than Ministers and their minions.

In the final result, as this ‘group’ stormed the barricades to President Gotabaya Rajapaksa’s residence, public property worth millions was destroyed and citizens as well as law enforcement officers were hurt. Journalists alleged that they had been assaulted by uniformed personnel despite media accreditation. The brutality practiced against camera carrying journalists as well as civilians by state agents recalled reflections of Rathupaswela, again under Rajapaksa rule years ago, when the army and the Special Task Force (STF) assaulted protestors asking for clean drinking water. This time around, cameramen of private television stations, were not spared.

Desperate populace versus a disconnected Government

But the point is that the incident in Mirihana was just one of many. Even as the incident escalated, protestors burned logs and tyres in Kelaniya demanding petrol, consumers fought the police elsewhere while trying to get domestic gas. On Friday, carpenters stormed Moratuwa, fishermen thronged the roads in Galle demanding power supply and fuel to carry on their trades and protests elsewhere spilled over to the weekend. Ruling politicians refrained from attending public events in fear of protests. Passing motorists tooted their horns in support and pedestrians cheered wildly in Colombo and elsewhere as protests took place.

These were unprecedented scenes in Sri Lanka’s post-independence history. This is not just Colombo’s middle classes holding candlelit protests as they see themselves being precipitated into poverty in the twinkling of an eye. Escalating public protests are interconnected, they point to a desperate populace vis a vis a Government deeply disconnected from reality. Only deaf, dumb and blind politicians would not recognise this obvious fact.

Do they believe that paltry sums of money promised by the grinning Finance Minister, will calm an angry man who can feed his family only for a few days on that sum? Does the Government believe that the familiar propaganda of ‘extremism’ would serve to dull public unrest when the populace is starving? This points to the sheer contempt that they have for the Sri Lankan public. This contempt is understandable. The toxic brand of nationalism, long the Rajapaksa brand, held aloft by its screeching supporters, has carried them into power once too often as it were. As we know, Sri Lankans are quick to forget, even to forgive. But not any longer, it seems.

Is there a State?

Utter insensitivity for the plight of ordinary citizens who have no power, no domestic gas, no basic essentials, prevails. The cackling by ruling politicians that they are sorry for ‘temporary problems’ while the citizenry faces existential dilemmas of finding bread and rice for the day is the height of callousness. The crisis we face is not the mere result of the covid pandemic or collective political mismanagement of the economy, though they both play a part. If that was the case, solutions lie elsewhere, in pruning luxurious lifestyles of ruling politicians, cutting down on needless extravagances and pulling back on state expenditure.

Politicians may also look at bringing back foreign funds stashed overseas in offshore accounts. Vulnerable segments of the populace must be systematically cushioned against the skyrocketing cost of living systematically, not given miserable one time handouts while the Government favours political party supporters and pays off international creditors rumored to include close pals of ruling politicians. The issue is gross incompetence and corruption in the State. This week, the country’s chief power regulator, the Public Utilities Commission of Sri Lanka (PUCSL) went to the Supreme Court, pleading a violation of its fundamental rights.

This peculiar rights challenge asked for a direction to compel relevant Ministers to supply fuel to generate electricity to the national grid. This must be the first time that a state regulator pleaded a violation of the Constitution to enforce essential service functions. What does this say for the State? Perchance, is there a State left, we must ask? If there is a modicum of sense left in Sri Lanka’s hopelessly struggling political leadership, it must acknowledge grievous mistakes on its part which have led us to this state.

“Are we destined for military rule with the gloves taken off as it were? The answer to the above questions lies in the astounding sight of three hundred lawyers gathered in the court complex to applaud and give support to the Mirihana protestors“

A deadly struggle for our land

Following the protests, the head of the Roman Catholic Church Cardinal Malcolm Ranjith condemned the Government’s classifications of protestors as ‘extremists’ and ‘terrorists’ without understanding the pain of a frightened people. This warning is best heeded not, as some Ministers have done, threaten mass retribution. Commonsense is called for. Does the Government contemplate putting massive segments of the Sri Lankan citizenry, (barring fat cats wallowing in luxury in Colombo as they profit off the misery of the populace), behind bars? Is curfew and a state of public emergency supposed to continue for the remainder of the President’s term, if that is even a feasible proposition?

Are we destined for military rule with the gloves taken off as it were? The answer to the above questions lies in the astounding sight of three hundred lawyers gathered in the court complex to applaud and give support to the Mirihana protestors. Elsewhere a placard held by a mother carrying her baby at one of the peaceful protests a few days ago simply read, ‘we have children too.’ This was a pointed reference while the populace suffers.

The message is clear; this is a deadly struggle for the land, for the birth right of thousands of children yet unborn who will be left with a wasteland if the rape and plunder of its riches by the political establishment continues. But much like the Romanovs of Russia, those in Sri Lanka appear not to have learned anything at all from history. They and in consequence thereof, the suffering citizens of this country are doomed to repeat the same nightmares.

We are living through the worst yet.

( Courtesy of The Sunday Times)