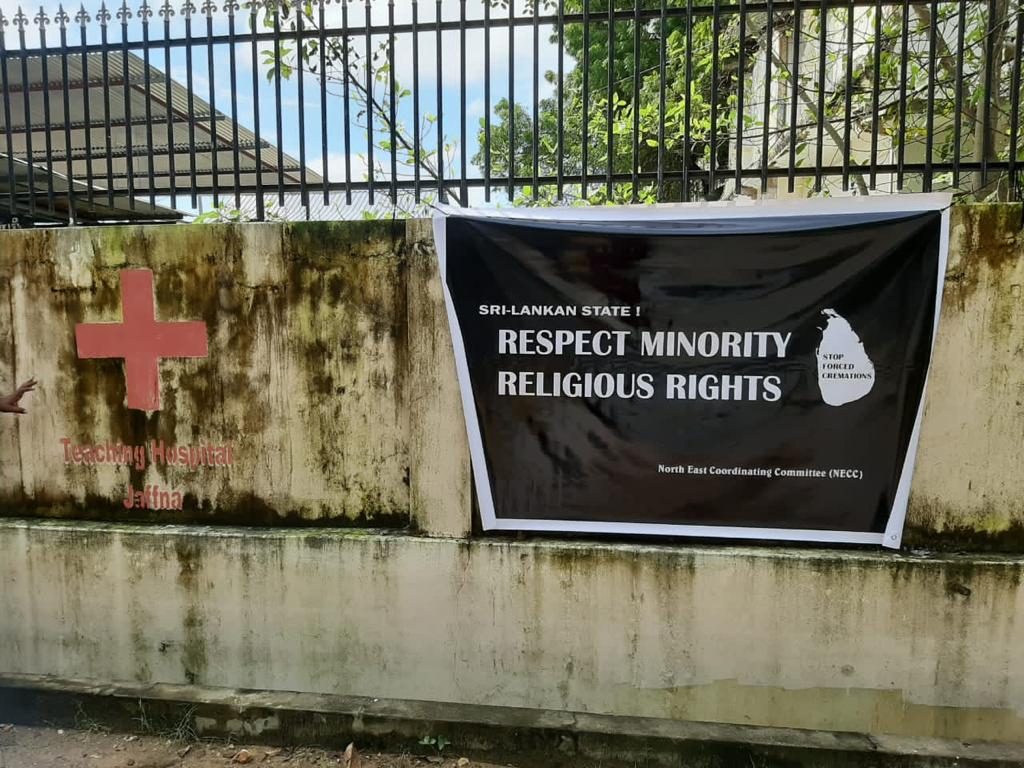 While appreciating Sri Lanka’s relative success with the management of COVID-19, the Global Tamil Forum (GTF) would like to express its strong condemnation of the mandatory cremation of all dead bodies suspected to have been infected with the coronavirus, and calls upon the leaders of all communities to do all they can to have this irrational and discriminatory government policy reversed.

Sri Lanka’s mandatory cremation policy has caused major outrage and trauma for the Muslim and Christian minorities, whose beliefs require dead bodies should be buried. It is the Muslim community that has been disproportionately affected by COVID-19, and to force them to adopt practices that violate their fundamental religious beliefs is cruel and inhumane.

It has been reported that the abuse of this policy is widespread and several Muslims whose bodies were cremated had not been tested for coronavirus, and even tested negative. Another tragic manifestation of this policy is that several Muslim families have even disowned their dead because they did not want to be complicit in the cremation of their bodies which is believed to be a sinful act against their loved ones.

There is no scientific justification for the government to adopt this policy and deny the dead the dignity they deserve in death. In fact, the guidelines from the World Health Organization state that the burial of victims posed no danger to public health, and almost all the countries allow for the burial of COVID-19 victims, making Sri Lanka an outlier among the world nations.

Top government officials changed their original guidelines under pressure from influential Buddhist monks to mandatory cremations. The Supreme Court rejected fundamental rights petitions filed by fourteen affected families without giving reasons for its decision. Faced with mounting domestic and international pressure, the government made an extraordinary attempt to fly bodies to Maldives for burial to placate its extremist support base. All these unquestionably indicate the direction Sri Lanka is heading.

The mandatory cremation policy is not an exception, but rather one more fitting element within the broader agenda of the Rajapaksa government. The deplorable initiatives it has taken within a year, such as enacting the autocratic 20th Amendment to the constitution; appointing Presidential Commissions and task forces to scuttle established governance procedures; militarising top levels of the bureaucracy (including some who are credibly implicated in serious human rights violations), resorting to surveillance, intimidation and detention without charge (a precursor for rampant media self-censorship), and withdrawing from the UNHRC resolution which Sri Lanka pledged for years as its ‘solemn commitment to accountability and reconciliation’ – are indicative of its gradual transition from democratic to an authoritarian regime.

These changes should ring alarm bells for each and every citizen of the country. The minority communities, who face enormous challenges and discrimination in daily life, now fear losing even the minimum of self-governance arrangements they enjoyed. They are afraid of losing their land and identity under the pretext of protecting Buddhist archaeological sites and calculated government development initiatives. The sense of despondency has driven them to courts, albeit unsuccessfully, to seek justice for their dead, the right to memorialise their dead, and now to bury their dead.

Even for Sri Lanka with its long history of discrimination and marginalisation of its minority communities, this mandatory cremation policy is a step too far. It is no secret that in the recent past the Muslim community has been at the receiving end of discrimination and violence. There is growing belief among the present ruling party ideologists that the more the Muslims are discriminated and targeted, the more the support the government will receive from hard-line nationalistic elements.

But Sri Lanka is also a country that has produced decent and humanitarian citizens and leaders, who stood for diversity, pluralism and human rights of all its peoples. It is time again for those principled citizens to do their part irrespective of their ethnic or political affiliations to prevent Sri Lanka plunging further into the abyss of prejudice and intolerance. The role of the majority community is so crucial to achieve this noble transition in the society.

Sri Lanka’s present hard-line policies on inter-communal tolerance and pluralism will take the country backwards by decades and even sow the seeds for future conflicts. The country’s preparedness to dishonour its firm commitments – whether to India or UNHRC – is likely to pose serious challenges to the international community. Deviating from long held international norms will have economic and other costs to the country on top of the already devastating blows dealt by the pandemic.

Lack of collective initiatives and counter actions now will only make the task much harder in the future. The civil society groups and all fair-minded people should seize the moment in the name of humanity, brotherhood and fundamental rights.