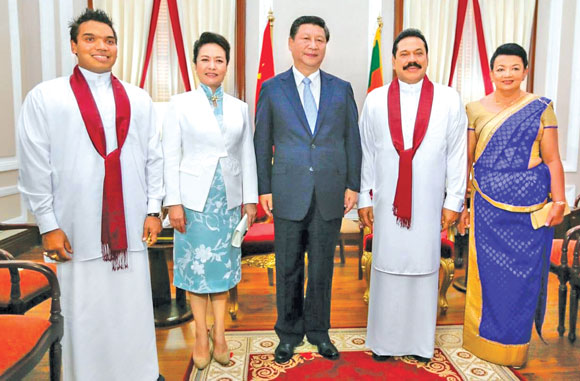 Former Sri Lankan president Mahinda Rajapaksa on Wednesday opposed a Chinese-funded industrial park in the port city of Hambantota, threatening to scrap the deal once he returns to power.

The statement comes days after 21 people were injured in a protest against the project, which many locals believe is a forceful takeover of private land,  The Hindu reported.

Rajapaksa, who hails from Hambantota, had a meeting with the Chinese Ambassador to Sri Lanka, Yi Xianliang recently, as per media reports. The topic of discussion is said to be the concerns over Chinese investments in the island nation.

During a Twitter Q&A, the former president answered many questions relating to Beijing’s rising influence in Sri Lanka. Measuring his words carefully, Rajapakasa said that while he is opposed to the way Chinese invested projects are being implemented by the current dispensation led by President Maithripala Sirisena, he reiterated that Beijing has always been a friend of Colombo.

Rajapaksa. who had visited China recently, added that he had not given any assurance to the Chinese high command on stopping his opposition to Chinese projects, and claimed that Beijing is welcome to invest in his country if people’s interest are taken into consideration.

#AskMR My request is to implement the project according to initial agreement w/ displacing people & harming the environment. 2/2 #SriLanka https://t.co/EcoGRjB3mX

Strongly refuting to one of the questions on Twitter that the Chinese envoy had expressed displeasure over his anti-China statements, Rajapaksa said that the Chinese ambassador himself had raised concerns over the manner in which the Hambantota investment zone project was being implemented.

The latest row over China’s investment in the Hambantota arose after the Sri Lankan government decided to divest 80 percent of its holding in the Hambantota port and hand it over to a Chinese firm in order to tide over the country’s economic crisis, reported The New Indian Express.

However, ironically Rajapaksa as president had actually allowed China to invest heavily in developing the country’s infrastructure. The Hambantota port deal was signed when Rajapaksa was the president of the island nation.

We are against it. Without solving the problems of the existing agreement we should not risk the job safety of Sri Lankans. #AskMR https://t.co/eeD272C3Cl

As The Hindu noted, Rajapaksa was seen as pro-Beijing in India’s policy circles. “With Chinese loans, he built a massive port and airport in the southern city of Hambantota, which the current government has termed financially non-viable ‘white elephants’,” the report said.

Rajapaksa’s current hostility towards China is in sharp contrast to his pro-Beijing policies were during his rule between 2005 to 2015, when he was defeated by Sirisena. During his 2014 visit to Beijing, where he met Chinese President Xi Xinping, Rajapaksa is reported to have said that the “Sri Lankan side is grateful for the friendship and support from the Chinese side. The help from China is very important to promoting economic and social development of Sri Lanka.”

The official communique from the Chinese foreign ministry also added, “The Sri Lankan side firmly supports China to safeguard national unity and fight against terrorist forces. Sri Lanka hopes to actively participate in the initiative of the Silk Road On the Sea of the 21st Century and the Asian Infrastructure Investment Bank, to strengthen maritime cooperation, to accelerate bilateral FTA negotiations, and to promote infrastructure construction and personnel exchanges between the two countries.”

His present-day stance against China’s investment, thus, seems more to be doing with his attempt at returning to power, while trying to hit a raw nerve with his Sinhalese electorate.