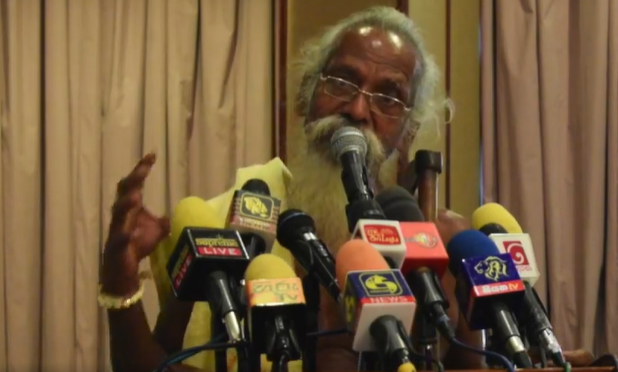 Destruction of the environment in the name of development has been a persistent concern over the recent past, not just to environmentalists but also to the indigenous populations who have gradually lost their land and have not been able to voice their grief.

“The Indigenous population has continuously lamented about their distress due to the destruction and disappearance of dense forests in which they have been residing for years,” Veddha Chief, Uru Warige Wannila Aththo said, adding that these forests where animals would be able to freely hunt, where heavy rainfall is hardly felt and have been providing for the medical needs of these indigenous population has been gradually destroyed in the name of development.

He added that there has been development since the era in which kings ruled but the difference from the current development is that in the past, the importance of preserving the environment was understood and it was clear that it is essential to conserve the environment in order to ensure that there is continuous sustainable development.

“The gradual loss of the land, traditionally belonging to the indigenous population, took place when forests were cleared and handed over for cultivation purposes, initially it was the distribution of five acres per year which gradually increased and clearing of forest land is taking place on a large scale at present and these lands are not even provided to those residing in the specific village in which the land is cleared, but to outsiders,” he added.

He lamented that currently, the indigenous population has to seek permission to even enter forests that they have been traditionally residing in and have been preserving for years as they are prohibited from doing so resulting in them facing several difficulties in accessing the necessary resources for their medicinal purposes and it has also resulted in losing their livelihood.

Uru Warige Wannila Aththo, in February, following continuous concerns against the proposed Agriculture and Livestock Development Project that was to be conducted by clearing the water catchment area of the Rambakan Oya Reservoir in the Ampara District, filed a Writ application together with the Centre for Environmental Justice (CEJ).

He stated that when the indigenous population in the area in which the proposed project was to be carried out expressed their concerns to him, he immediately inspected the area where he observed that massive destruction has already commenced not only causing damage to the environment but also to the wildlife habitat.

Environmentalist, Nayanaka Ranwella, further raising concerns on the persistent forest clearing, stated that replanting trees in hope that it would compensate for clearing of forests is least effective adding that this would not indemnify the irreversible destruction on forest reserve.

Thereby, it is evident that the concept of sustainable development should be upheld in order to preserve not just the wildlife habitat but also that of indigenous population who have traditionally lived in these areas.