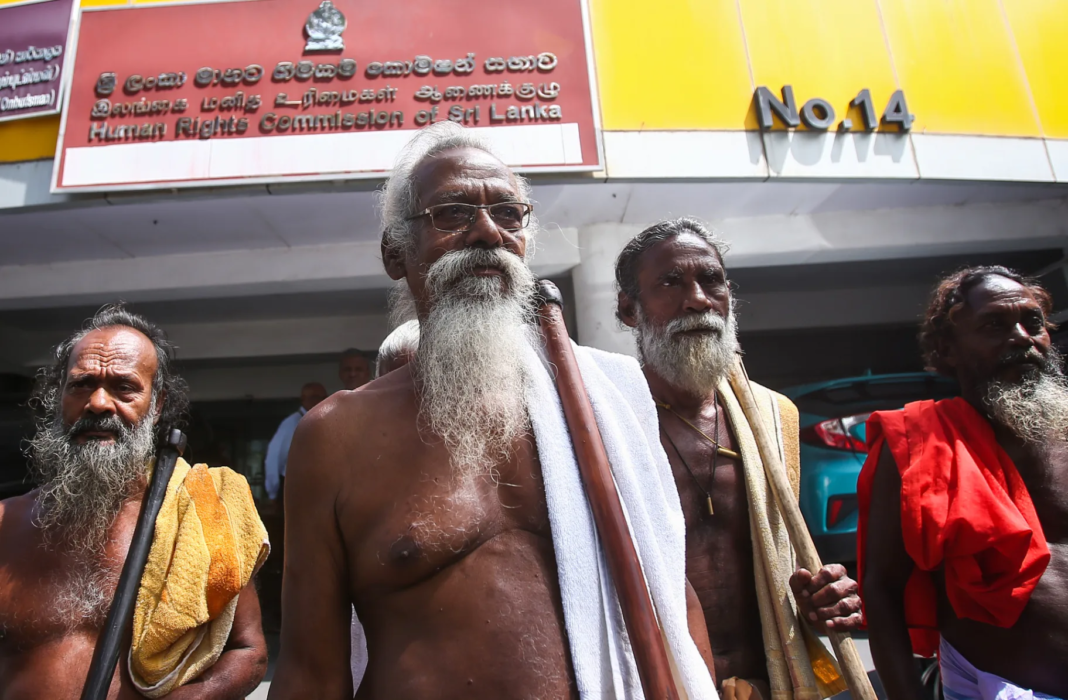 Image courtesy of The Morning.

“There are numerous ongoing issues faced by the indigenous community such as the capturing of their inherited property by several individuals. Wannila Aththo discussed similar issues faced by the indigenous people in areas such as Ampara and Monaragala. Their request was for the Government to pass a legitimate Act to initiate a process to secure their rights. This Act should comprise of a correct definition to their community in order to confirm their right to live, and their culture, language, and beliefs. They requested to formulate laws to safeguard their right to access Courts and to obtain legal aid in Courts,” HRCSL Commissioner Dr. Nimal Karunasiri said while speaking about the discussion held with the Vedda Chief to the media yesterday.

Dr. Karunasiri said that these issues faced by the Vedda community have been discussed for more than 40 years but that no practical solution was provided in this regard. “In summary, they are requesting for an acceptable National Identity Card (NIC) along with a legal document to secure their unique identity and their culture, as they do not belong to the mainstream ethnic groups in Sri Lanka. As a result of other laws that are currently in effect, they are not able to hunt or travel freely. This document and the Parliamentary Act need to bring about solutions to all these issues.”

The Vedda community consists of Sri Lanka’s earliest inhabitants, and they deserve their own identity, rights, and privileges. There are numerous challenges faced by these indigenous groups who are scattered in different settlements around the Island and the formulation of laws through a Parliamentary Act is a timely requirement in order to safeguard their rights and existence.

In this regard, a policy document was prepared by the Centre for Policy Alternatives, which was compiled after focusing on these issues faced by this community based in the Uva, North Central and Eastern Provinces. This policy document was presented to the media at an event held at the Sri Lanka Foundation Institute yesterday, in the presence of the Vedda Chief and other Provincial indigenous leaders.

Meanwhile, this series of policies and demands regarding various issues faced by the Vedda community were handed over to the Speaker of Parliament Mahinda Yapa Abeywardana, Prime Minister Dinesh Gunawardena, and Opposition Leader Sajith Premadasa yesterday. According to a press release issued by the Parliament, leaders of the aboriginal Vedda community led by Vedda Chief Wannila Aththo visited Parliament yesterday. Although certain steps have been taken for the advancement of the indigenous people at different occasions, the Vedda leaders had pointed out the various problems that the indigenous community has had to face in making their livelihood due to the lack of legal strength.

The leaders had also stressed that it is a problem that no census has been conducted regarding data of the indigenous people in Sri Lanka after 1963, and that injustice has been done by classifying the data of the aboriginal community under the category of “other” in the censuses conducted after 1963. Thus, it had been discussed that the rights of the aboriginal people in some countries of the world have been recognised and that the necessary legal provisions have been provided for such through separate Acts. Accordingly, it was discussed that the aboriginal people in this country should have the same recognition and rights. The issue pertaining to microfinance loans given to indigenous women had also been discussed. On this occasion, Abeywardana had pointed out that he would discuss the related issues with Gunawardena and take every step to protect the rights of the aboriginal people. Gunawardena had also assured that he would provide his full support to secure the rights of the indigenous people. Gunawardena had also instructed State Minister of Home Affairs Ashoka Priyantha to find suitable measures to resolve the issues faced by the aboriginal people locally, while assuring that he would look into the measures that can be taken through the committees of the Parliament. Chief Government Whip and Minister of Urban Development and Housing Prasanna Ranatunga said that special attention will be paid to what can be done through the Parliament. Meanwhile, Premadasa had also emphasised that the demands of the aboriginal people were reasonable and stated that he would extend his full support.