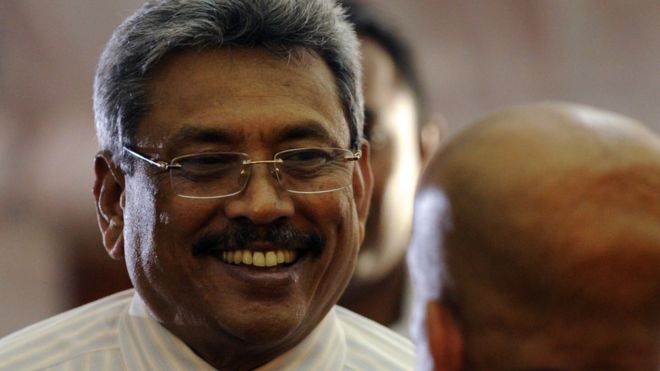 One of Sri Lanka’s most controversial politicians has been charged with corruption involving the illegal transfer of state-owned weapons.
Gotabhaya Rajapaksa is charged with allowing a private firm to establish a floating armoury.

Mr Rajapaksa, who denies wrongdoing, served as defence secretary during the presidency of his brother, Mahinda Rajapaksa, which ended last year.

The charges were filed in a Colombo magistrates court by a special anti-corruption commission.

The discovery of the floating arsenal off southern Sri Lanka, and of another weapons haul in the capital, came in the days after Mahinda Rajapaksa was voted out of office.

Private firm Avant-Garde Security Service said the weapons were for escorting commercial ships, but police said they received complaints that the firearms were used for intimidation.

Gotabhaya Rajapaksa has also been dogged by accusations, which he denies, of human rights abuses linked to the final defeat of Tamil Tiger militants in 2009.

Several other members of the Rajapaksa family are also under investigation over alleged corruption.

Sri Lankan President Maithripala Sirisena has promised to investigate claims that members of the Rajapaksa family siphoned off billion of dollars of public money during Mahinda’s nearly 10-year presidency.

The former president, now an opposition lawmaker, has also been heavily criticised over alleged human rights abuses by the Sri Lankan military during a long-running war with Tamil separatists.
bbc.com