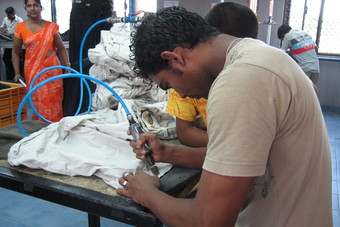 Dilshani Samaraweera
Two years after it was formally removed from the GSP+ scheme that allowed duty-free exports to the EU, Sri Lanka’s apparel industry says it is feeling the loss of the preferential tariff system.

Sri Lanka’s removal from the EU’s GSP+ scheme in August 2010 came six months after the country was withdrawn from the preferential tariff initiative following allegations of non-compliance with the qualification criteria.

Now, two years later, Sri Lanka’s apparel industry, the biggest user of the GSP+ when it was available, says exports are feeling the loss of GSP+ and wants it back. But the dilemma facing the sector is how to achieve this.

In the immediate aftermath of the removal of the GSP+, both the industry and the government said Sri Lanka’s apparel exports to the EU had in fact increased, and had not suffered from the loss of duty-free access.
This was also vindicated by export numbers. Earnings from textile and garment exports increased by 7% year-on-year in 2010 and exports to the EU, which accounted for around 50.7% of the country’s total apparel exports, increased by 3.0% to US$1.678 bn.

In 2011, earnings from textile and garment exports to the EU increased by 25.1%, while overall exports rose 24.9% to US$4.191bn, surpassing the US$4bn target set by the apparel industry.
But by the end of August 2012, the situation had reversed.

Apparel exports to the EU, in terms of value, increased by 1.2% in January 2012 compared to January 2011, but dropped marginally, by 0.6%, in February – and continued to drop at an increasing rate from then onwards, as shown in the table below.

The trend has set off warning bells within the industry.

However, the garment sector is also clearly unwilling to compromise its relations with the Sri Lankan government by publicly stating that this loss of market share in the EU is due to the loss of the GSP+.

Nevertheless, factory owners say that while the slowing EU economy may have had some impact, the reality is that Sri Lankan apparel has become less competitive in European markets against duty-free exporters like Bangladesh and other low cost producers like Cambodia, Vietnam and even India.

While Sri Lankan apparel exporters are currently using the EU’s GSP scheme, this is not seen as providing adequate leverage against lower cost competitors.

Factories say they currently face an average landed price differential alone of about 9.6%, due to the loss of the GSP+, and as a result their margins are getting thinner.

Speaking at a forum in Colombo recently, Rohan Masakorala, CEO of the Shippers Academy, said: “The cost of market access due to the loss of the GSP+ could be considerable over a term, and some in the industry have indicated as much as US$1bn as a opportunity cost over the next few years.”
He added: “It is true that an opportunity cost, along with a reduction of volumes of certain product items to other countries who have zero-rated market entry to [the] EU, have eroded our competitiveness.

“Given our competitors having this preferential access to the EU for products that we make, we too must try to obtain a level playing field for our products as well. We should try to get this trade tool back, if possible, in the future…”

The president of the Sri Lanka Apparel Exporters Association, Rohan Abeykoon, says: “There is no-one out there in the industry that does not want the GSP+ back, but the question is whether the government would re-apply for the GSP+.

“This year there is a US$122m drop in export earnings from January to August, compared to last year. In 2012, overall, to all markets, including the EU, our exports dropped by 6.5%. So, if the trend continues, we can expect an overall drop of about 8% in earnings this year, compared to 2011,” Abeykoon added.

However, the official opinion seems to be that a return to the GSP+ may not happen any time soon.
JS