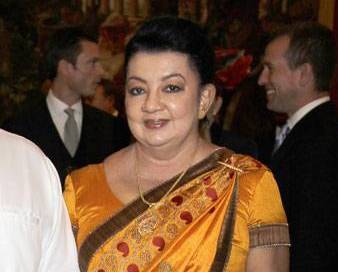 Sri Lanka’s former first lady, Shiranthi Rajapaksa, spent 25 million rupees to watch Vesak, the biggest Buddhist festival in Paris while packing in a pilgrimage to Lourdes, a beloved shrine of the Catholics.

She was representing Sri Lanka at the 2014 Vesak celebrations organised by the UNESCO in France and stayed in a super luxury hotel which charged 2,000 euro a night for the room only. She spent three nights there, Foreign Minister Mangala Samaraweera told parliament.

“King George the Fifth had stayed in this hotel, but Queen Elizabeth does not stay in this hotel because it is too expensive for her,” Samaraweera said. “But for our queen, the cost is not a problem.”

He disclosed accounts of the visit of the former first lady who was also accompanied by her aunty, Daisy, who recently shot to fame after Yoshitha Rajapaksa claimed she had gifted him a multi-million rupee palatial home in Mount Lavinia.

Aunty Daisy and the first lady also used the mini bars in their rooms extensively, according to the bills submitted to the Sri Lankan embassy in Paris, the minister said. The drinks had to be replenished thrice during their stay which cost a total of 25 million rupees to Sri Lankan tax payers, the minister added. (COLOMBO, May 5, 2017)