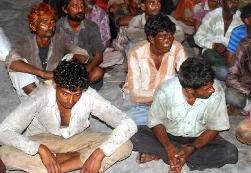 Chennai, Dec 12 (IANS): India cannot continue with the facile “do not touch” policy with Sri Lanka in the wake of its “brazen” and “warlike” mass abduction of Indian fishermen, Tamil Nadu Chief Minister J. Jayalalithaa said Thursday.
“These are the largest and most outrageous acts of mass abduction of our fishermen by the Sri Lankan Navy,” Jayalalithaa said in a letter to Prime Minister Manmohan Singh Thursday, the text of which was released to the media here.

Jayalalithaa was referring to the Sri Lankan Navy’s attempt to abduct 325 Indian fishermen.

“Such brazen and near warlike acts could not have been carried out without the tacit approval of the Sri Lankan government. India’s prestige and image has suffered grievous damage,” she said.

Jayalalithaa said Wednesday the Sri Lankan Navy attempted to abduct and apprehend 47 boats with close to 325 fishermen from Nagapattinam district while they were fishing off the Akkaraipettai coast.

She said 110 fishermen in 15 boats quietly surrendered to the Sri Lankan Navy, while 32 boats with 215 fishermen turned back and returned.

The surrendered fishermen have been taken to Trincomalee for further legal action.

According to the chief minister, the entire fishing community in Tamil Nadu has lost faith in the ability of the Indian government to protect the lives and livelihood of innocent fishermen on the high seas.

“Surely, we cannot continue our facile ‘do not touch policy’ in the face of these audacious and high handed acts that violate the lives and livelihoods of our fishermen anymore,” Jayalalithaa told Manmohan Singh.

She hoped the Indian government would wake up to the reality.

“The Sri Lankan High Commissioner in New Delhi must be summoned to the ministry of external affairs and our strong protest lodged. Prime Minister, sir, you must personally take up this issue with the President of Sri Lanka without any further delay,” Jayalalithaa said.

Earlier, reacting to the detention of Indian fishermen by the Sri Lankan Navy, DMK president M. Karunanidhi said: “The English lodged Indian freedom fighters in Andaman in the Bay of Bengal. Now Sri Lanka Navy is converting the Bay of Bengal into an open air jail (for Tamil Nadu fishermen).”

“And India is permitting it,” Karunanidhi said in a statement.
DW