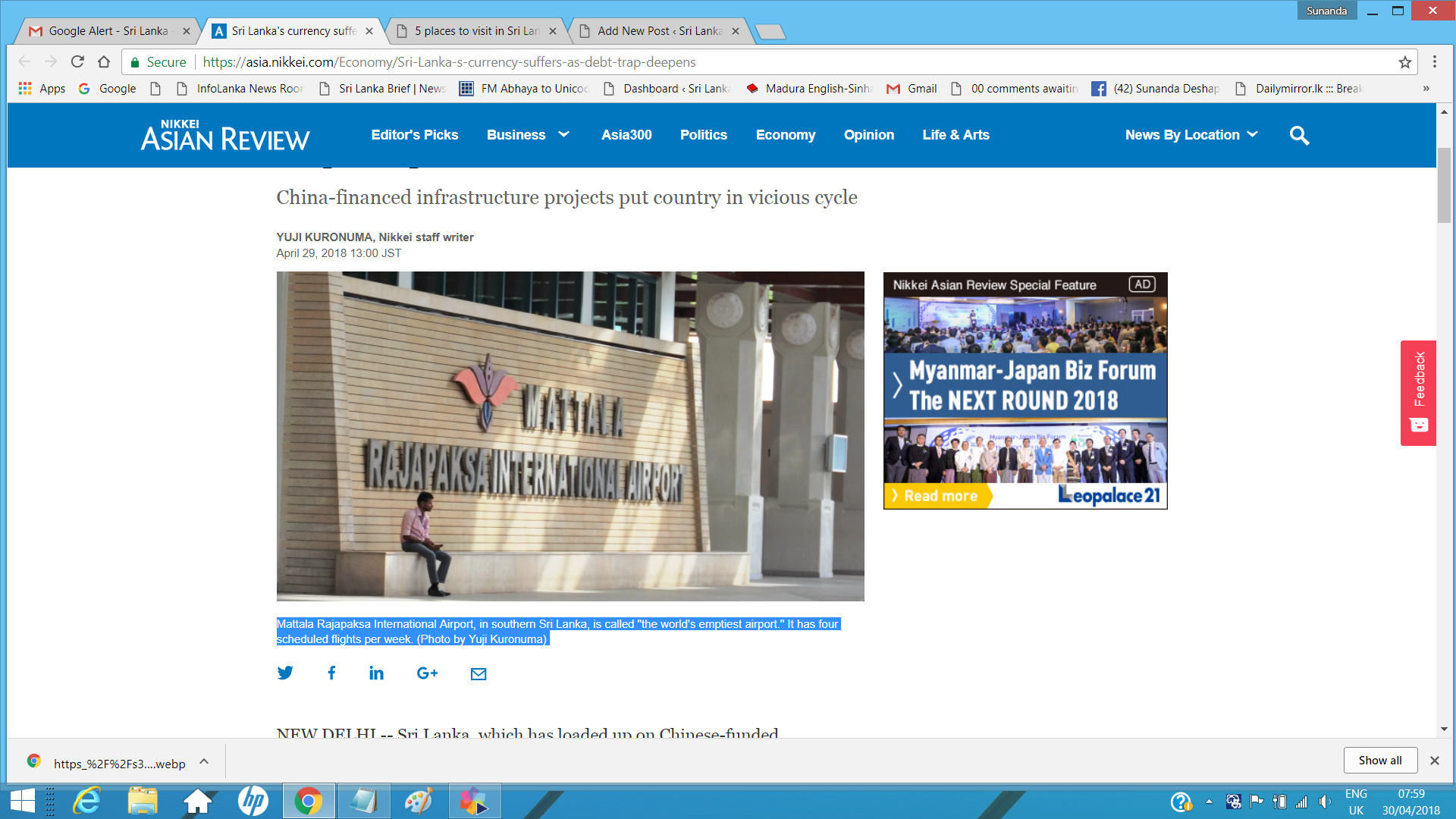 NEW DELHI — Sri Lanka, which has loaded up on Chinese-funded infrastructure, is sinking deeper into a debt trap as its currency weakens and economic growth decelerates to its slowest pace in 16 years.

The Sri Lankan rupee has depreciated 3% against the greenback this year to 157.4628 per dollar, according to forex data that the country’s central bank tracked on Friday. It is at its weakest point ever and has softened nearly 20% since President Maithripala Sirisena took office in January 2015.

About half of Sri Lanka’s loans are denominated in foreign currency. As a result, “any further weakening of the rupee will increase the rupee value of maturing foreign exchange debt and interest payments” — driving the government’s financing needs higher, said Alex Holmes, an economist at Capital Economics.

The country is caught in a vicious cycle: Investors devalue the rupee over concern about government debt, which then increases the nation’s obligations even further.

Falling tax revenue prompts another concern as the economy grew 3.1% last year, the slowest since a contraction in 2001. In the October-December quarter, growth was also sluggish at 3.2%. The nation of over 20 million people holds some of the highest debt levels in Asia. International Monetary Fund estimates for 2018 peg the island’s debt at 11.23 trillion rupees ($71.9 billion), or 77% of gross domestic product. The country’s debt payments are forecast to hit 14.1% of GDP this year, while revenue is only expected to equal 14.4%.

Sri Lanka floated $2.5 billion in dollar-denominated sovereign bonds this month, its largest issuance ever and close to its $2.8 billion in payment obligations from April through June.

Raising revenue in the near term will be difficult, though “the new Inland Revenue Act [which took effect in April] will improve tax revenue, exports and foreign direct investment,” said Shiran Fernando, chief economist at the Ceylon Chamber of Commerce.

The island has used debt to fund the construction of harbors, airports and roads. But Sri Lanka at present can cover its obligations only by taking on more debt, leading many to think the government will have to sell off national assets. The IMF has encouraged Sri Lanka to trim spending by state-run enterprises through reforms and reduce its debt through asset sales. With his country’s currency having lost nearly 20% of its value against the dollar since 2015, Sri Lankan Prime Minister Ranil Wickremesinghe visits a Chinese-funded reclamation project in Colombo in January.   © Getty Images

The process has already begun. Sri Lanka sold a 99-year lease to China in December granting rights to a harbor in the southern town of Hambantota in order to write off $1.1 billion in debt.

For Beijing, which wants to establish footholds in the Indian Ocean, the financial deterioration of a maritime nation like Sri Lanka provides a golden opportunity. The lease sparked a backlash from regional rival India, since it offers China a potential harbor for its naval vessels.

“We had to make a decision to get out of this debt trap,” said Mahinda Samarasinghe, the ports and shipping minister of Sri Lanka.

But Sri Lanka has not climbed out of the trap yet. The country also is weighing whether to lease the rights to nearby Mattala Rajapaksa International Airport, which only began operations in 2013.

Both projects are officially named after previous President Mahinda Rajapaksa, a pro-Beijing politician who used Chinese money to build each. The Export-Import Bank of China, for example, funded $190 billion of the airport’s $290 billion price tag. The airport could provide an air base for Beijing only a stone’s throw from India. New Delhi seeks to win rights to the airport as well, but China holds the stronger claim as a creditor.

China also has financed infrastructure projects in Pakistan and the Maldives. A former president of the Maldives has said the small archipelago nation is also caught in a debt trap. Beijing stands as the main creditor to both countries, whose debts equal 67% and 71% of GDP, respectively. No Chinese naval ports have been identified, but Beijing could easily obtain strategic assets through debt-equity swaps such as in Sri Lanka.

Former Chinese President Hu Jintao referred to the Strait of Malacca, where the Indian Ocean exits to the rest of Asia, as a dilemma since it serves as the lifeline through which 80% of his country’s oil imports passed.

Current President Xi Jinping and Indian Prime Minister Narendra Modi met Friday and Saturday in the central Chinese city of Wuhan. Though they sent messages of their defusing tensions, no end is in sight for the contest to dominate the Indian Ocean, which New Delhi views as its own. Sri Lanka’s asset sales to China could reignite tensions, with the country’s debt pile tipping the region’s geopolitical scales.