Sri Lanka:Protesting for democracy, in their own way 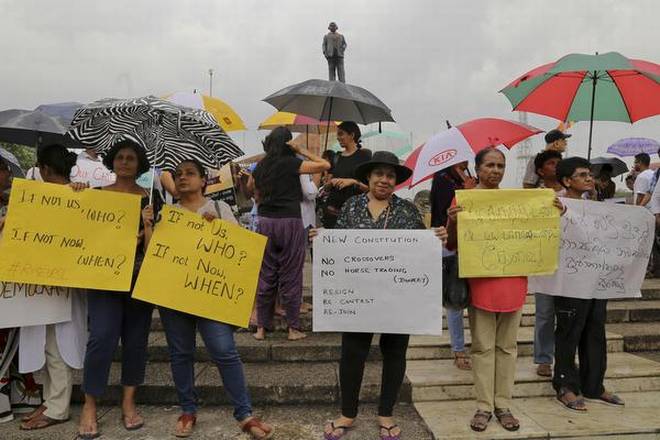 Image: Civil society groups and activists hold placards during a protest demanding that democracy be restored in the country as they gather at the Independence Square in Colombo, Sri Lanka, on Nov. 19, 2018. | Photo Credit: AP.

Civil society groups and activists hold placards during a protest demanding that democracy be restored in the country as they gather at the Independence Square in Colombo, Sri Lanka, on Nov. 19, 2018.

Civil society groups and activists hold placards during a protest demanding that democracy be restored in the country as they gather at the Independence Square in Colombo, Sri Lanka, on Nov. 19, 2018. | Photo Credit: AP

In the whirlwind seven weeks of political impasse, Colombo witnessed a string of incessant protests by concerned citizens, including women’s groups, members of the LGBTQ community, artistes and professionals.

A little different from each other, the agitations — at the Liberty roundabout, Lipton Circus or Independence Square in the heart of Colombo — had an underlying call: for the country’s democracy to be restored. As Sri Lanka edges towards some reprieve this weekend, many are likely to feel, perhaps in varying measure, relief and hope.

The period of the crisis saw at least two other significant protests that drew some attention. About 170 km north of Colombo, in Puttalam district, scores of residents are dreading a land-fill project coming up near their homes. Authorities pitched the the $101 million ‘Aruwakkalu project’ as “the solution” to Colombo’s garbage problem, especially after a mountain of trash collapsed near Colombo last year, killing over 30 people and crushing 150 homes. Designers of the project envisage transporting about 1,200 tonnes of garbage collected from Colombo daily to this site by train. “We are doomed,” said Asana Aboo Haniffa, an activist in Puttalam. “This site is going to have an immediate impact on our heath and long-term impact on the environment,” she said. For over 75 days now, locals have been protesting against the project with little response from Colombo. Those in power, she alleged, think that the garbage site in “faraway Puttalam” won’t affect them.

“But the truth is it is going to affect the entire country in future. It will contaminate our ground water and affect rare species of plants that grow nearby. We already find dead fish floating in our sea. It will affect tourism in Kalpitiya [by the west coast], when there won’t be any whales or dolphins to spot,” she said.

Amid the heightening political crisis in the capital, two key protests in Sri Lanka sought to highlight the need for better wages for estate workers and a safer environment

Wage woes
The other protest, launched by workers employed in Sri Lanka’s tea estates across the Central and Uva provinces, is two years old. Workers recently relaunched their strike, demanding a basic wage of LKR 1,000 a day (₹400), a few hundred rupees less than the living wage that studies have shown as necessary. Though about 50% of the workforce struck work for more than a week, delivering a huge blow to tea production that brings precious foreign exchange, their employers had no appetite for any demand to do with wages.

Workers rejected the proposal that plantation companies employing them made — of a 20% increase in basic earnings — arguing that the marginal raise would help them little at a time when living cost is spiralling rapidly.

The companies said the “100% wage hike” was not sustainable and instead suggested workers increase their productivity “by just 1 kg” to earn the amount as an incentive.

“Negotiations have failed, and unions felt we need the government to intervene as a third party, except that we didn’t have a government for weeks,” said Menaha Kandasamy, an adviser to the Red Flag Union. The strike has been called off, and local politicians have assured the workers that they would get the government to step in. At the height of the political crisis, President Maithripala Sirisena met union leaders last week, and urged them to resume work while assuring a fair wage hike. A “new government” may kick off its duties in the coming week. It will hurriedly pass a budget to ensure public finances are available from January 1. There will be new Ministers and perhaps new promises.

Meanwhile, the estate workers and residents fearing hazardous waste will wait for their democracy to be restored.