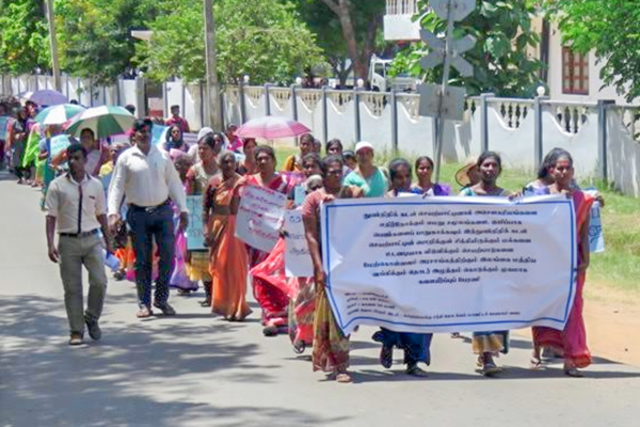 Image: A protest in Kilinochchi last June against the micro-finance system.

(28 March 2019 /WSW) According to a March 17 report in Sri Lanka’s Observer newspaper, at least 170 debt-ridden rural residents, mainly women, committed suicide last year. Most of those who took their lives were from the island’s war-devastated North and East.

The suicides are another indication of the deep-going social and economic problems facing the rural poor who are being hit by rising living costs and government cuts to subsidies and social welfare programs.

Citing information from the Progressive Peasants’ Congress, the newspaper reported that the latest suicide victim was from Elahara village in the Polonnaruwa district. The 38-year-old father took out an initial loan of 80,000 rupees ($US450) but was unable to service it, then borrowed another 30,000 rupees to pay back part of the original loan.

Desperate to settle the debt he moved to Colombo, over 170 kilometres away, in an attempt to secure masonry work. He was unsuccessful and returned to the village where he took his life. His suicide is one of many such tragedies reported in the media over recent years.

The loan taken out by the poverty-stricken Elahara villager is typical of those being provided by so-called micro-finance lenders.

According to the government’s National Economic Council, there are around 10,000 such lenders in the country, the majority of them not subject to any regulations. The development finance department of the finance ministry estimates that about 2.9 million people—84 percent of them women—obtained loans from these companies in 2017.

Official bank interest rates on loans in Sri Lanka are generally between 15 and 20 percent. While the Central Bank has imposed a maximum rate of 35 percent for microfinance loans, some lenders charge unbearable rates ranging as high as 220 percent.

Most of those who committed suicide in response to exorbitant loan repayments last year were from the Vavuniya and Jaffna districts in the island’s north and Batticalao in the east.

Colombo’s devastating three-decade war against the separatist Liberation Tigers of Tamil Eelam killed nearly 200,000 people and destroyed the homes and livelihoods of tens of thousands more in these areas. Currently there are about 90,000 war widows in the North and East provinces attempting to maintain their families without any real income.

Since the war ended in 2009, successive Sri Lankan governments have refused to provide economic and social support for these war survivors, opening the way for predatory lenders to profit from the suffering.

A report to the UN Human Rights Council (UNHRC) by Juan Pablo Bohoslavsky in January noted that various institutions “generate huge profits by putting enormous pressure on poor borrowers, and on women in particular.”

While some loans were for small businesses, others were to cover everyday living expenses or to reduce or pay off previous loans, Bohoslavsky reported. He noted that “collectors visit the houses of these women, sometimes on a daily basis, and that the women are [often] exposed to psychological and physical violence by collectors.” Debt collectors sometimes pressurised women for “sexual favours,” he said, and that some female borrowers had even offered to sell their kidneys to repay loans.

K. Selvadi, 45 and a mother of four children, is from Kayts in Jaffna. She told World Socialist Web Site reporters that she and two other women jointly applied for a 75,000-rupee loan for a fishing net. Their husbands had to sign as guarantors and the repayments are 2,000 rupees per month.

Selvadi said that she faced an uphill battle to pay the interest and settle the loan because the income from fishing was insufficient.

“I am looking for odd jobs in vegetable gardens. This is very difficult work because it is in the hot sun and they only pay 700 rupees for a whole day. One of my daughters works in a crab meat company for just 15,000 rupees per month,” she explained.

M. Sivaranjani, 36, from Velanai, obtained three loans totalling 300,000 rupees in order to develop the family’s fishing business. She pays about 10,000 rupees per month on loan repayments.

“If we don’t pay these instalments the debt collectors come to our home. We have to borrow from friends or relatives in order keep up the payments. Our lives have been transformed into a debt-ridden existence,” she said.

Kirubalini, 44, from Velanai, spends her entire earnings on interest repayments. “The government has said that it will write off microfinance loans but it’s done nothing. It also promised to provide low interest loans but these will still be loans. I can’t sleep properly because of these debts,” she said.

While rural farmers are borrowing from the banks in order to pay for farm inputs, they are also taking out additional loans from microfinance companies for basic living expenses. They frequently confront crop failure due to drought or floods. Currently, 14 districts in Sri Lanka are experiencing severe drought.

Radhika Gunarathna, director of the Nelumyaya Foundation, a non-governmental organisation, told the media that she recently learnt that a 45-year-old mother of two was on the brink of a family suicide because their bakery had gone bankrupt. They had borrowed 800,000 rupees to sustain the small business. Her husband suggested that they close all the doors and windows of their home and that all four members of the family gas themselves to death.

Farming communities are burdened by the rising cost of seed, pesticides and fertilisers whose prices are controlled by profiting-gouging multinational corporations. Protests by farmers demanding guaranteed prices for their produce and improved subsidies, including for fertiliser, are increasing across the island.

Plantation workers are also heavily burdened by exorbitant loans because they do not receive a living wage. In recent months estate workers have held militant protests and a six-day national strike to demand a doubling of their 500-rupee daily basic wage. This struggle was betrayed by the plantation unions who settled on a paltry pay rise tied to increased productivity rates.

Blaming “loan sharks” for the high interest rates, Samaraweera, admitted that the government’s debt write-off “is a short-term solution to a much larger problem” but declared “it is not feasible to have multiple debt write offs of this nature.” He proclaimed the government would introduce new laws and regulations to control the so-called microfinance industry.

Suicides caused by rural debt, including microfinance borrowings, are a rampant problem in so-called developing countries. In India, for example, 5,650 debt-ridden farmers and 6,710 agricultural workers committed suicide in 2014. The following year 8,007 farmers and 4,595 agricultural workers took their own lives. The Indian government responded to these catastrophic and increasing figures by stopping its recording of the number of suicides.