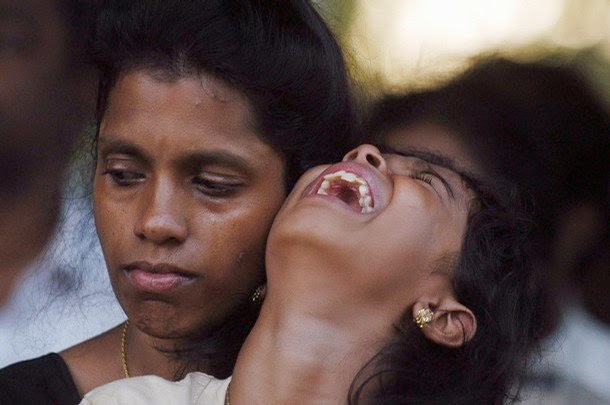 When Sri Lanka’s brutal civil war ended in May 2009 after raging for over two and half decades, it signaled the end of a long- running national nightmare. But, with many men killed, for thousands of women the war’s end meant the beginning of a new life of hardship.
Viji, a 32-year-old widow from the village of Oddusuddan, deep in the northern Mullaittivu District where the last battles of the war were fought, lost her farmer husband in a shell attack and has been struggling to raise her three children alone.
“It is hard. I have to work, look after household affairs and make sure the kids go to school,” said Viji, who goes by one name.  Before her husband’s death, Viji never worked outside the home. He looked after the finances while she took care of the household affairs.
After being displaced between late 2008 into early 2010, Viji returned home to find her small house flattened. “When we first came back, everyone was desperate. There were no houses, no income. But at least there was some assistance.”
Viji like other families returning home received around $140 as a grant from the UN High Commission for Refugees. The family also received food assistance until about mid-2012. Since then, Viji has been forced to seek employment.
Matters are made worse by the lack of jobs in the Northern Province. Unemployment data is not available for the full province, but in the two districts where data has been available, the unemployment rate is over twice the national rate of 4%.
Viji survives by doing day jobs like cleaning houses, gardening or helping out in harvesting. The maximum she gets paid is Rs 500 (about 40 US cents) per day. “On a good day, I might get food, which I try to take back home for the kids.”
MORE THAN 40,000 SINGLE FEMALE-HEADED HOUSEHOLDS
Viji’s story is not rare.
According to the Durable Solutions Promotion Group, a voluntary group comprised of experts on aid policy, human rights, and humanitarian aid experts from the UN and other international ogranisations, there are over 40,000 families in the Northern Province headed by single women, many of whose husbands were killed, are missing or are in government detention for suspected affiliation with the defeated rebel Liberation Tigers of Tamil Eelam (LTTE).
Saroja Sivachandran, who heads the Centre for Women and Development in northern Jaffna, said that the number of such households could exceed 50,000.
Sivachandran said that as Sri Lanka reduced assistance to returning families and humanitarian agencies began pulling out, single female-headed families faced a precarious situation.
“There are lots of concerns over food security, family security, the security of the children, the list can be endless,” Sivachandran said.
In mid-2013, the World Food Programme carried out a food security assessment in the region and found that 43% of the families in the Northern Province were food insecure. With a debilitating drought in the last six months and harvest losses of over 50% in the province, many feel that the situation is worsening.
“It is getting harder and harder for these women to find gainful employment. That is forcing them leave their vulnerable families for long periods of time,” Sivachandran said. She cautioned that unless action is taken to assist this group as separate community, the families will be in grave danger.
A glimpse of such vulnerabilities was provided by the latest Sri Lanka update by the Durable Solutions Promotion Group.  Released in March, it said that incidents of sexual violence and abuse of minors was increasing among single female-headed families.
“There is a clear indication that children of the estimated 40,000 women-headed households are the most vulnerable to sexual abuse,” the update  said.
It also found that as sole breadwinners, women who head households are often absent, working as daily labourers and leaving their children without adequate care and protection. Field reports indicate that, in this environment, new partners of widows or extended family members are perpetrating abuse against children. (Reuters)
Share
Facebook
Twitter
Pinterest
WhatsApp