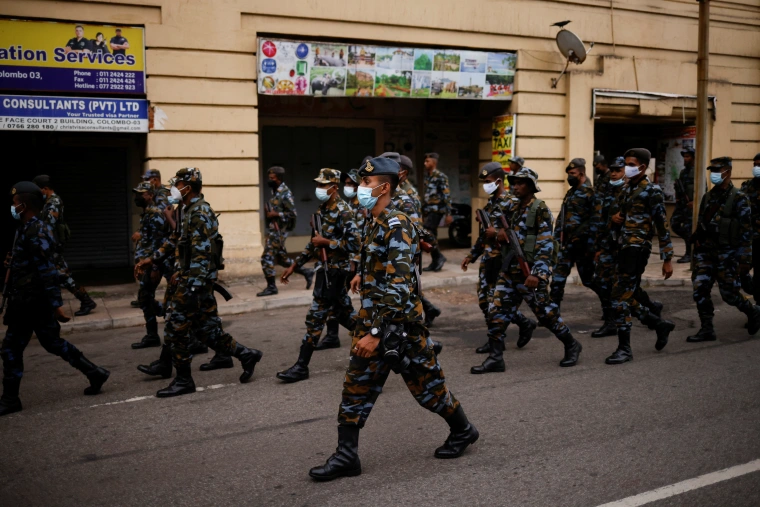 New York, July 27, 2022 – Sri Lankan authorities must thoroughly and swiftly investigate recent attacks on journalists by the country’s security forces, hold the perpetrators to account, and cease harassing the staff of Xposure News, the Committee to Protect Journalists said Wednesday.

On the early morning of July 22, Sri Lankan security forces assaulted at least four members of the press, including three journalists with the privately owned digital news platform Xposure News, covering a military raid on a protest site and subsequent demonstration in Colombo, the capital, according to those journalists, who spoke with CPJ by phone.

Separately, police arrived at the Xposure News office on Wednesday, July 27, seeking three journalists who had covered protests for the outlet, those journalists said.

Protests have broken out throughout Sri Lanka amid an ongoing political and economic crisis; President Gotabaya Rajapaksa fled the country on July 13 and resigned the next day, and former Prime Minister Ranil Wickremesinghe was sworn in as the new president on July 21.

“The repeated attacks on journalists covering political unrest in Sri Lanka must come to an immediate end. The government must order security forces to cease detaining and harassing journalists covering the country’s political and economic crisis,” said Carlos Martinez de la Serna, CPJ’s program director, in Madrid. “Authorities must thoroughly investigate these attacks, hold the perpetrators to account, and cease harassing the staff of Xposure News.”

At about 1:20 a.m. on July 22, Sri Lankan Army officers attacked Jareen Samuel, a camera operator and video editor with BBC News, while he was covering security forces’ raid on a protest camp in the Galle Face area of Colombo, according to multiple reports by the BBC and Samuel, who spoke to CPJ by phone.

Samuel told CPJ that he and members of his reporting team showed their press IDs and foreign accreditation cards to the officers, who then repeatedly slapped Samuel, pushed him to the ground, and kicked him several times in the abdomen. He said an officer also confiscated his phone, deleted videos from it, and then returned it.

Samuel was treated at a local hospital for an injury to his abdomen, he told CPJ.

Also early that morning, officers with the Sri Lankan Air Force attacked three journalists with Xposure News while they covered a protest in the Kollupitiya area of Colombo, according to a video of the incident published by Xposure News and the three journalists, who spoke to CPJ by phone.

Shortly before 3 a.m., officers first attacked Chaturanga Pradeep Kumara, a videographer, video editor, and researcher with the outlet, according to the journalist and that video. Kumara said an officer beat him on the legs with a baton, knocking him to the ground; when he could not get up, officers dragged him to a dark area nearby as he repeatedly identified himself as a journalist.

At that location, air force and army officers confiscated his phone and his personal and press ID cards, Kumara said. Officers deleted several videos from Kumara’s phone and ordered him to contort his body into positions used as punishment among members of the Sri Lankan Army; when the journalist was unable to put himself in those positions, he said the officers beat him with batons and then lined him up with other detainees and repeatedly slapped them across their ears.

After about three hours, officers returned Kumara’s phone and identification cards and released him, the journalist told CPJ, saying he received painkillers for a muscle injury to his leg at a local hospital.

Shortly after officers detained Kumara, Xposure News digital head Rasika Gunawardana and Shabeer Mohammed, a freelance journalist reporting for the outlet, were filming security forces allegedly attacking civilians when a group of air force officers surrounded them, ordered them to stop filming, and threw Mohammed’s phone to the ground, according that video of the incident and the two journalists. Gunawardena said that an officer then struck him on the head from behind with a baton, and Mohammed said officers hit him from behind on his neck.

Gunawardena and Mohammed received treatment at a local hospital for their injuries and were prescribed painkillers, they said.

The three Xposure News journalists told CPJ that they were unable to identify the officers who attacked them because they were not wearing badges and their faces were covered.

Sri Lanka police spokesperson Nihal Thalduwa did not respond to CPJ’s request for comment sent via messaging app. CPJ emailed Nalin Herat, a spokesperson for the Ministry of Defense, which oversees the army and air force, but did not receive any reply.