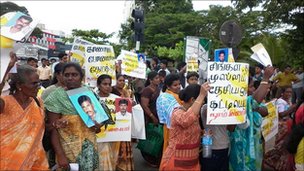 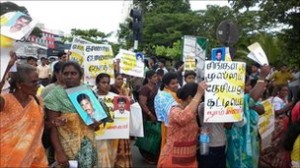 Charles Haviland
Weeping parents have been demonstrating in the Sri Lankan capital, Colombo, asking what has become of close family members who have disappeared.
(More photos at the end )

The protesters gathered on a hot street corner near the town hall.

Most of those grieving were Tamil and from the former war areas of north and east Sri Lanka. They solemnly held pictures of their missing loved ones.

The issue of disappearances still causes agony for many Sri Lankans, who do not know where to get help.

“We want our children,” the protesters chanted. “Where are our children? Dear president, please listen.”

The war has been over two years, they said, but their children remain missing.

About 100 family members of disappeared people demonstrated, supported by a student organisation.

Many broke down as they spoke.

Maneswari Chandrarasa said her 19-year-old son, Prabhakaran, had no political connections but was taken away three years ago by men claiming to be from the Criminal Investigation Department.

But the CID subsequently denied any knowledge of it, she said.

Missing person Mayurathan is believed to be third from the left
“They came inside the house and took my child who was asleep,” she said, weeping. “I’m still looking for him. So far there’s no reply from the officials. Please give me my child.”

Neranjini Nirmalanathan, who had earlier lost her husband to the Tamil Tigers, said soldiers took her son, Mayurathan, in 2007. He was an altar boy at church in Jaffna.

Her enquiries to the authorities since then had gone unanswered. But in June a Tamil newspaper published a photograph of him and five other youths that it says it found on the internet.

She clutches the photograph, which she thinks shows the six in a prison.

“I want my son,” she said, sobbing, in English. “Please try and understand, I want my son, without my son I will commit suicide.”

Large numbers flocked to testify before the government’s own war inquiry commission during its public hearings late last year, though relatively few could be heard.

During the war many saw their children forcibly conscripted by the Tamil Tigers, only to be later detained by the government side and never seen again.

A recent police announcement that families could now seek news of their loved ones at police stations seems to have made little difference.
BBC news 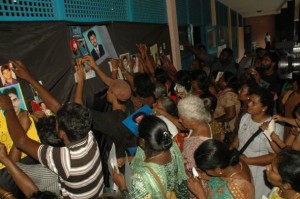 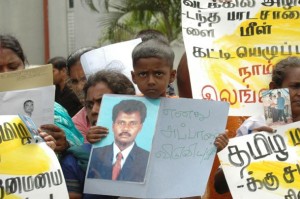 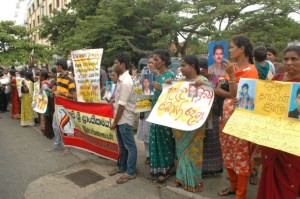 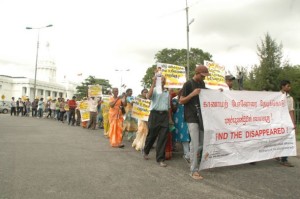