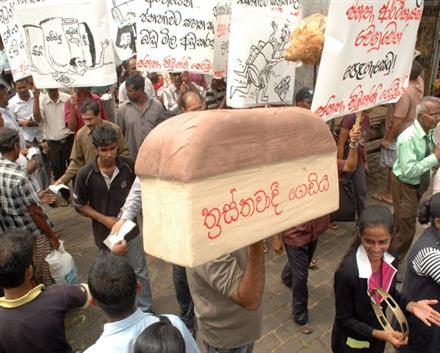 Saman Gunadasa
Sri Lankan president and finance minister Mahinda Rajapakse presented the 2013 budget to parliament on November 8, in line with the demands of the International Monetary Fund (IMF). The austerity budget will further undermine the living standards of working people, who already have been hit by rising prices and an effective wage freeze since 2006.
The budget provided only a pittance for public sector workers—a monthly allowance, not a wage rise, of just 750 rupees, or 20 US cents a day, from next January, and another 750 rupees from mid-year. The amount is about 10 times less than workers have been demanding to compensate for cost-of-living increases. No mention was made of the country’s eight million private sector employees, who include plantation workers, the largest section of the working class.

We depend on the support of our readersRajapakse promised to alleviate poverty by 2015, but this is a cynical lie. Two weeks before the budget, the price of a kilogram of wheat flour was raised by 6 rupees, triggering price rises for bread and other flour products widely used by working-class families as a staple. Under the guise of protecting local producers, the government is heavily taxing a range of essential items, including maize, onions, potatoes and dairy products.

The wealth and luxuries of the super-rich have not been touched. In fact, a 300 percent tax on racing cars was removed. The corporate tax rate, which previously had been reduced to 28 percent, was left untouched. Rajapakse also liberalised the exchange controls for banks and corporations to obtain foreign funds.

Just before the budget, the finance ministry lifted restrictions on the investment of private pensions, as well as provident, gratuity, trust and savings funds, in the share market. A three-year tax holiday has also been offered to the companies that were quoted with at least 20 percent of their equity in the stock market by the time of the budget.

The Colombo Stock Brokers Association declared it was “elated that the important and the urgent need to develop the capital market has been duly recognised by the Finance Minister.”

Rajapakse again increased funding for the defence and urban development ministry, which is run by his brother Gotabhaya Rajapakse, by 60 billion rupees to 290 billion rupees. This 26 percent increase will mainly go to strengthening the already extensive security apparatus, amid growing signs of resistance by workers to attacks on their living standards.

The president promised to increase spending on health and education, but this is unlikely to be realised. In his speech, he indicated that 154 and 125 billion rupees would be spent on education and health, but the appropriation bill presented in parliament last month allocated only 65 and 93 billion rupees respectively.

The tax rises are aimed at boosting revenue by about 20 percent, compared to last year, and reducing the budget deficit to 5.8 percent of gross domestic product in 2013 as per the IMF’s directives. Total revenue will be 1,257 billion rupees ($US9.6 billion) with an estimated expenditure of 1,785 billion rupees.

The government, which obtained an IMF loan of $2.6 billion in 2009, is now looking for further funds. Lanka Business Online reported that Sri Lanka had expressed interest “in having an on-going ‘surveillance’ program with the IMF” that could involve another $500 million in contingency funds.

However, in order to fund existing loan repayments, the government needs new loans of 1,303 billion rupees, or nearly $10 billion, in 2013. This is creating a vicious cycle, with public debt increasing by 24 percent to 6,161 billion rupees by the end of July 2012, compared to the same period last year. Sri Lanka is heavily dependent on loans from China, in particular.

The Sri Lankan economy has been shaken by the slump in Europe, the US and Japan, which is also causing a slowdown in many Asian economies. The island’s growth rate is expected to drop from 8.3 percent last year to 6.5 percent this year. Exports in September, dropped by about 7 percent compared to last year. Garments, the country’s top export, dropped by around 9 percent and rubber products by nearly 20 percent.

Imports also fell by 25 percent in September, compared to last year, as the government increased import taxes for items such as vehicles and allowed the rupee to depreciate in a bid to curb an escalating balance of payment crisis.

Rajapakse provided limited assistance to farmers and small businesses in a bid to shore up a social base for his government. He cut the tax rate to 10 percent for small and medium enterprises with an annual turnover of less than 500 million rupees. He also proposed some financial assistance for replanting small tea, rubber and coconut plantations.

With a drought affecting many farmers, the government has requested banks to suspend interest payments and delay loan recoveries until the end of the next cultivation season. Rajapakse also increased the guaranteed price for paddy rice from 30 rupees this season to 35 rupees next season. The government-guaranteed prices provide little help for farmers, as more than 90 percent of the harvest is sold to private buyers at lower prices. Farmers are being squeezed by escalating prices for farm inputs and low prices for their crops.

The corporate sector hailed the budget as business friendly. The Ceylon Chamber of Commerce commented: “Notwithstanding the difficult macroeconomic environment, we appreciate the efforts of the government to continue with the tax reforms.”

The main opposition parties are seeking to exploit mass resentment and anger over the budget. Several United National Party (UNP) parliamentarians denounced it as being for the super-rich. The right-wing UNP, however, is notorious as the party of big business. It initiated pro-market restructuring in the late 1970s and consistently brought down budgets oriented to the corporate elite and foreign investors.

Janatha Vimukthi Peramuna (JVP) parliamentarian Anura Kumara Dissanayake declared that the budget had dashed the hopes of workers. The JVP and its trade unions, however, have been instrumental in blocking any political fight by the working class against the Rajapakse government. In 2004, the JVP was part of a coalition government with Rajapakse’s Sri Lanka Freedom Party that implemented the IMF’s restructuring demands.

The budget underlines the deepening crisis of the Rajapakse government, which confronts growing opposition from workers as it is compelled to enforce the dictates of the IMF and international finance capital.
WSWS