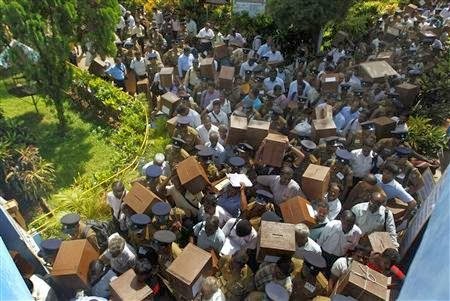 By Shihar Aneez
JAFFNA, Sri Lanka (Reuters) – A member of a Sri Lankan election monitoring group was attacked along with nine supporters of an ethnic minority Tamil political party by a group of gunmen who the victims said on Friday were clad in military uniform.

Sri Lanka’s military denied any involvement in the attack at around midnight on Thursday, at an office of the Tamil National Alliance (TNA) party outside the northern town of Jaffna.

Voters in northern Sri Lanka go to the polls on Saturday for a provincial election that threatens to stir up old animosity between the government and Tamils, four years after the military crushed separatist Tamil rebels and ended a 26-year war.

Most voters in the north are Tamils and many of them are bitter about what they see as virtual occupation of the region by the army which they accuse of rights abuses in the final, bloody stages of the war.

They are expected to vote overwhelmingly for the TNA, the former political proxy of the defeated rebels, in the election for 38 provincial councilors.

Kanakaratnam Sugash, the Jaffna district legal adviser for the People’s Action for Free and Fair Elections (PAFFREL) poll monitoring group said the attackers beat him with sticks and kicked him.

“I repeatedly explained that I am a lawyer for PAFFREL,” Sugash told Reuters at a Jaffna hospital where he was admitted for treatment.

He said he was made to kneel and had a gun pointed at him: “They threatened to kill me if I revealed the incident.”

The TNA supporters who also were beaten said the armed men told them that they wanted to kill their candidate, Ananthi Sasitharan, 42, the wife of a Tamil rebel leader who went missing after surrendering at the end of the war in May 2009.

Sasitharan told Reuters that she believed she was a target because she had raised human rights abuses by the government at a meeting with U.N. human rights chief Navi Pillay, who visited Jaffna last month.

Military spokesman Ruwan Wanigasooriya rejected any suggestion the military was behind the attack and said the security forces were not involved in any violence.

Defeat for the government of President Mahinda Rajapaksa in Saturday’s vote would be largely symbolic but victory for the main Tamil party could reignite calls for autonomy.

The chief TNA candidate, C.V. Wigneswaran, said he was worried the army might attempt to block people from voting.

“They want to reduce the vote for us,” he said.

Rajapaksa and his government have come under international pressure to bring to book those accused of war crimes committed at the end of the war and to boost efforts on reconciliation in the polarized country.

The government has rejected accusations of rights abuses and Rajapaksa in July ordered an inquiry into mass disappearances, mostly of Tamils, at the end of the war.

The U.S. embassy in Colombo said the Thursday night attack should be investigated and it called for a peaceful, free and fair vote.