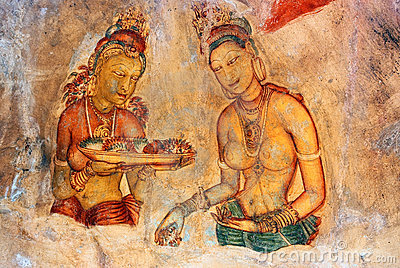 Image: 5th  century Sigigiya frescoes in Sri Lanka; Will the rulers put on a   blouse with sleeves on them ?

COLOMBO: Female staff of the Sri Lankan parliament are barred from entering the Public Officers’ Box if they are wearing a sleeveless blouse, according to a report in The Sunday Times of December 25.

“A trilingual notice freshly placed on the door to the Public Officer’s Box in Parliament stipulated the dress code for female public officers as being saree and a blouse with long-sleeves. And so, a number of female public officers who came to discharge their duties during the budget debate were barred from entering the Box and thus prevented from performing their official functions on the grounds that they were not properly dressed,” the paper said.

But this is not the first time that dress became an issue in the Sri Lankan parliament.

In 2009, a Tamil National Alliance MP from Batticaloa, Thangeswary Kathiraman, was asked to leave the House because she was in Shalwar-Kameez. She had broken a rule which said that female MPs must be in a sari. Thangeswary’s plea that she could not come in a sari because of a large surgical scar on her midriff was rejected.

Asked how the Muslim lady MP of the Janatha Vimukthi Peramuna (JVP), A.R.Anjan Umma, was allowed to come in an Abaya and a Hijab it was said that prior permission had been obtained to enable Muslim MPs to come in their religiously prescribed dress.Outside parliament too, some institutions have tried to impose a dress code on women. This year, St.Joseph’s College,  a boys’ school in Colombo, had put up a board at the gate prescribing the acceptable dress for mothers who come to drop and pick up their children.  Short skirts and revealing dresses, tights, jeans and sleeveless tops were banned on the grounds that boys would get distracted if they saw young mothers in revealing clothes.  But hostile media coverage of the code resulted in the government’s barring schools from prescribing dresses for mothers and other visitors.

At the height of anti-Muslim feelings in 2014, the Bodu Bala Sena (BBS), an extremist Buddhist monks’ organization, carried out a campaign against the Abaya and Hijab, especially the Hijab which covers the entire face. Fully covered up people were seen as a “security threat”.

Since the BBS had the tacit support of the Mahinda Rajapaksa regime, the Muslim Council of Sri Lanka started a scheme to exchange back Abayas and Hijabs for colorful ones so that the full covered women did not appear to be threatening. The movement died out with the exist of the Rajapaksa regime in January 2015.

Seeing the Sinhalese Buddhists and Muslims adopting their own dress codes, moving away from Western modes, Sinhalese Christians, the most Westernized of Sri Lankan communities, also wanted to impose a code in tune with the emerging ideas of modesty. There were attempts to convey to congregations that women coming for service must be dressed modestly.

Original Caption: No sleeveless blouses please, we are Sri Lankans; Image and caption from SLB.