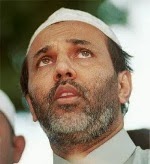 Minister Mervyn Silva on Tuesday warned Minister of Justice and Sri Lanka Muslim Congress (SLMC) Leader, Rauff Hakeem, that Prabhakaran’s fate awaits anyone resorting to treacherous activities against the country. Addressing an election meeting of the United People’s Freedom Alliance (UPFA), in Wewelduwa, Kelaniya, on 11 March, the Minister of Public Relations and Public Affairs, said: “I would advise Minister Hakeem not to stir up communal feelings by making inappropriate speeches. It is far better for him to keep his mouth shut and retain his ministry without losing it.”

Minister Silva continued: “I read the statements made by Minister Hakeem in the newspapers recently, that the SLMC,was able to topple Chandrika’s Government, and that the Alliance Government too would fall once the SLMC walks out.He should know that the President needs only 113 members to have the government in power. But he (the President) has the support of more than 160 Members of Parliament as he is popular. This is because he treats all religious and ethnic groups as equal partners of the government. You have only seven or eight members in your Party as part of the alliance with the government.”

Speaking further, Minister Silva said even if some of them withdraw their support, it will not affect the government.
“It is therefore better for you to stop boasting and attend to the work in your ministry. You also must be aware that the President had publicly declared that his government’s door is open for anybody to leave, but if anybody resorted to treacherous activities against the country, Prabhakaran’s fate would await him,” he warned.
BY KARUNADASA WIDANAGAMAGE
CT