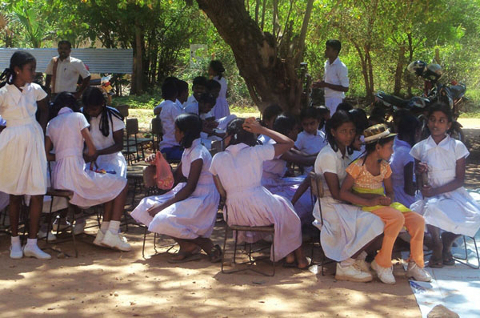 The Sri Lankan government last month announced a “remarkable achievement”—the resettlement of the last of nearly 300,000 Tamil war detainees. This was an outright lie. The government ordered the military to remove the remaining 1,200 refugees from detention camps erected after the end of the country’s civil war in May 2009, only to dump them in a roughly cleared area in thick jungle without basic facilities.

With the defeat of the Liberation Tigers of Tamil Eelam (LTTE), the Sri Lankan military detained all civilians who fled the war zone—men, women and children—in so-called welfare villages at Manik Farm near Vavuniya. These “welfare villages” were run by the military as prison camps. Under international pressure and facing criticism at home, President Mahinda Rajapakse’s government began the “resettlement” of the detainees in late 2009. The vast majority of those “resettled” are still living in primitive conditions.

The following report was compiled by a team of World Socialist Web Site reporters who investigated the conditions facing the last group to be forcibly resettled.

We travelled 85 kilometres from Jaffna to Suriyapuram, near Pudukuduirippu, where the final group of war detainees were moved. As you pass Kilinochchi town going toward Pudukuduirippu, you see many military camps. Signs on unoccupied land that read “reserved for military use” indicate that more facilities are being prepared. The entire area remains under military occupation.

People originally from Pudukuduirippu and nearby villages, including Keppapilawu and Seeniyamotai, are not allowed to re-enter their villages, which are occupied by the military. Justifying the government’s decision to keep residents out, Mullaithivu District Government agent N. Vedanayagam declared: “They can compromise national security and hence, we could not settle them in their original villages.”

The displaced residents have been “resettled” at Suriyapuram, five kilometres from Pudukuduirippu. The area is about one kilometre inside thick jungle and is surrounded by military camps. The army patrols inside the settlement on push bikes and maintains strict control over the refugees.

Conditions are dreadful. The area was once considered the LTTE’s main base, and sharp battles were fought here and toward the eastern coast. Shops, houses, schools, temples and hospitals were destroyed, without a single building being spared. The Pudukuduirippu area has no basic facilities. People do not have adequate food, clothing, education, medical treatment or clean water, not to mention electricity. The people are surviving on inadequate rations of rice, dhal and sugar. They have no way of earning money to mitigate their extreme poverty.

Families live in huts made of tin sheets and galvanized pipes, which cannot withstand heavy rain or winds. Even this substandard accommodation is not provided for widows and the elderly. They have to live with their relatives or friends.

One young widow told us: “The Tigers [LTTE] forcibly recruited young people for training [as their fighters]. I got married to avoid that. During the war my husband died in a shell attack. I was left alone and am now staying at my sister’s hut. The authorities said I cannot have aid or separate hut. The government made me a widow and now unjustly deny me any facility.”

The authorities have forced the former detainees to clear the jungle. People do not believe the government’s claim that they have completed de-mining the area, and fear that they will be killed or maimed by undiscovered landmines. Refugees also face poisonous snakes and wild animals, including elephants.

There is no public transport. Students must walk to their classes, some of which are conducted under trees because some classrooms were completely destroyed in the war. Other classrooms have no chairs or desks, so students must sit on the floor. One young mother said: “We protected our children during the war and came here. We fear that we may lose them. Our children have to walk two kilometres through the forest to reach the school. To get medical treatment we have to travel more than six kilometres to reach a hospital. There is no power supply for us and we live in the dark at night.”

Inadequate supplies of fresh water are brought in bowsers and stored in small tanks that have been erected. Many people have to walk for several kilometres to fetch water for drinking and washing. No toilets have been built, leaving people facing the threat of disease.

The Pudukuduirippu hospital is temporarily functioning at Kaiveli, two kilometres away. This facility serves 40,000 people resettled from Wiswamadu toward Kilinochchi, through to Mullaivaikkal, near the north-eastern coast. There are only two doctors and three nurses. When one doctor goes on leave, the other doctor works 24 hours without a break. No midwives are available and women about to give birth are sent to the Mullaithivu or Kilinochchi hospitals. Around 200 to 300 patients are treated every day, mostly for snake bites and leg injuries, or dengue and malaria, which are rampant.

The hospital relies on limited power supplies from generators. There is no freezer to store medicine. There are only 18 beds in the wards and many patients are forced to lie on the floor. There are only two toilets for patients and doctors, exacerbating the unhygienic conditions. Water is brought in a bowser, but many patients have to use unclean water.

The appalling conditions in the area underscore the fraud of the government’s boasts that it has resolved the refugee crisis in Sri Lanka. The country’s military committed numerous war crimes during its offensives against the LTTE, and in the concluding stages of the civil war it indiscriminately bombarded areas on the north-eastern coast, killing tens of thousands of people. The latest refugee “resettlement” forms part of a wider collective punishment of civilians inflicted by Rajapakse and the military in the aftermath of the bloody conflict.
WSWS