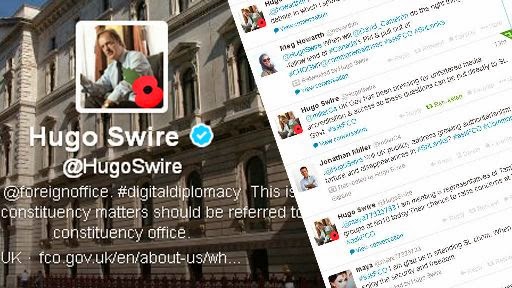 Sri Lanka is a controversial choice to host the meeting:

Nevertheless, a delegation of senior UK politicians, including Prime Minister David Cameron, will head to Colombo next week for the summit.

Channel 4 News has exposed the allegations of human rights abuses in Sri Lanka, both during and after the civil war, and has broadcast shocking footage of alleged atrocities.

Mr Swire, who received hundreds of questions in the hour long session, answered one of the questions.
However, he also addressed some of the issues Channel 4 News raised in other questions, in the 16 answeres he gave.

The minister was inundated with questions about Sri Lanka’s human rights record, both during and after the war – with questions on how the government will pressure President Rajapaksa to address sexual violence, torture and religious violence in the country.
More than half (61 per cent) of the 148 questions asked of Mr Swire, from when he first said he would undertake the Q&A session, were on Sri Lanka’s human rights issues.

He was asked by @liyygg: “Why has the UK been silent on calls for an independent, international investigation into alleged war crimes.”

Mr Swire responded: “We consistently call for an independent, thorough and credible investigation into allegations of war crimes.”

@AmnestyUK asked if the UK will ask President Rajapaksa “where disappeared journalist Prageeth Eknaligoda is, and meet with his wife and other human rights defenders?”

Mr Swire responded that the UK “consistently raises media freedom with the government of Sri Lanka”, and had urged them to investigate Eknaligoda’s disappearance.

He added that the UK government was planning to meet with families of the disappeared in Sri Lanka, and that he hopes Sandhya Eknaligoda, Prageeth’s wife, could join.

@v0ic34justic3 asked: “Will Commonwealth leaders be rewarding instead of punishing Sri Lanka for its appalling war crimes?£ and used the hashtag #NoFireZone – a reference to the latest documentary aired on Channel 4 – which exposes the horror faced by Sri Lankans in the last few weeks of the civil war, including evidence of summary execution, torture and sexual violence.

Olly Sprague asked if the UK supports Sri Lanka becoming the chair of the Commonwealth, something that will take place following the meeting. Mr Swire said Sri Lanka was chosen for the role four years ago, and that there was “no consensus among Commonwealth members to change this.”

Twitter has already been used to express anger at the decision to host the heads of government meeting in Sri Lanka. The hashtag #IndiaShouldNotAttendColomboCommonwealth has been trending on the micro-blogging site at a time when there is growing pressure on the India prime minister to take a stand.

The current hesitation in India about who to send to Colombo is a blow to the Sri Lankan government as India is their largest trading partner in the Commonwealth.
C4